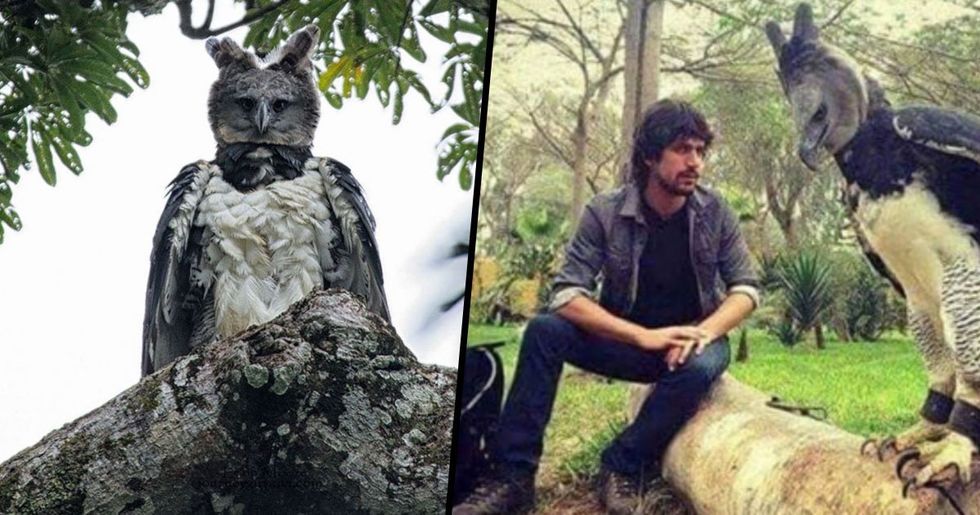 Is it a bird? Is it a plane? Is it a man dressed in a bizarre feathered costume?

No. It's just the Harpy Eagle.

Yes, believe it or not, people are genuinely mistaking the Harpy Eagle for a person in a costume. It sounds quite ridiculous when you put it down on paper like that, but this bird is unusually proportioned and doesn't look like your typical eagle.

Keep scrolling to hear more about this quirky bird, and to see the creepy photos that have been baffling so many people...

When you think of an eagle...

It is usually this thing that springs to mind. Cliche Americans, aren't we?

However, there are over a hundred species of eagle out there.

Yes, believe it or not, there are more types than our beloved Bald Eagle.

Eagles come in all sorts of shapes and sizes.

Ranging from the Golden Eagle, the White Tail Eagle, and the Steller's Sea Eagle, these birds have many cousins and distant relatives.

However, there's one type in particular that has people talking...

One eagle has recently caused waves over the internet after people began confusing it for a person in costume. No, I am not making this up.

Admittedly, at first glance, this just looks like a slightly odd-looking, blow-dried bird, doesn't it?

However, if you take a look at the full thing...

There is something eerily human-like about the bird's posture.

Yes, the bird that used to be known for its sheer size and hunting abilities...

...Is now best recognized for looking like a man dressed in a bird suit. Thank god it can't understand us...

There is something in those eyes...

Okay, there is definitely a person hiding behind those feathers.

The Harpy Eagle has become popular for its unique appearance.

It doesn't look like your typical eagle, does it? Though this one looks like something you'd find stuffed on your weird Aunt's mantlepiece...

The Harpy has a distinctive look, to say the least.

Though I can't quite put my finger on what it is, there's something very human-like about this particular type of bird.

People online were left very confused by the creature.

With the theme of most comments being about how humanized this bird looks.

Yet, despite its bizarre appearance...

Throwing looks aside, the Harpy Eagle is actually a highly-skilled predator.

They are most commonly found in South American countries like Mexico and Brazil.

Harpy eagles are the largest, most powerful raptors to be found in rainforests around the globe. What’s more, they are among the very largest species of eagles on planet Earth.

And their talons are not to be messed with.

Sadly, there aren't many Harpys left in the wild.

Due to the destruction of its habitat, the Harpy is nearly eradicated in Central America, and there are fewer than 50,000 of them left worldwide. Keep scrolling to see another picture that has sent the world crazy recently - there's a leopard hiding in there somewhere but only a few people have managed to spot it right away! Can you see it?