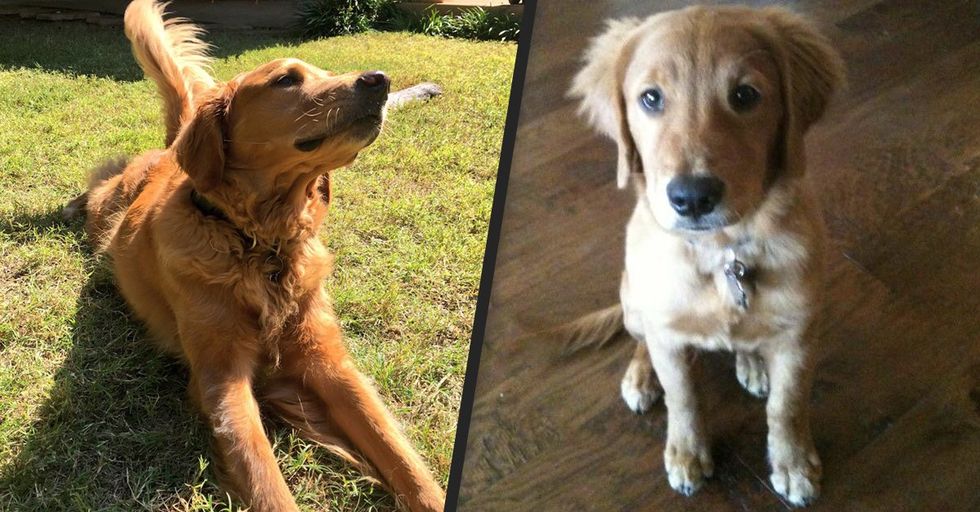 This is the story of Hank the hero dog. I do not want to give away how Hank becomes a hero because the reveal is so good. It really is a roller coaster of a story. It will thrill you, it will scare you, it will make you go, "Awwwwwww good boy!" Hank is not only a hero, but he is also an adorable Golden Retriever. And like any good internet story, the responses are plentiful and incredible. So many people chimed in with pictures of their own Hanks and other pets to tell Hero Hank that he did a great job.

This is Hank six years ago.

Isn't he a cutie? But don't get distracted by his face. You also have to read the tweet. It's important to know, before the story goes any further, that it has a happy ending.

Because it's definitely an emotional roller coaster. But first...

Hank hasn't always been a good boy. Six years ago, he ate a brand new pair of shoes.

Hank's family was reminded of his indiscretion on the same day that he became a hero.

That night, Hank started barking uncontrollably. If you've ever had a dog that barks a lot, you know it's pretty annoying.

But it turns out Hank had a good reason.

The yard of the family's house was on fire. Like, completely up in flames. I don't even know what I'd do if I saw that.

That's absolutely terrifying. And in such close proximity to their house!

The whole family sprung into action and got everyone out of the house.

They were even able to inform the neighbors of what was going on and get them out before the firefighters got there.

And it turns out, they got out just in time.

Instead of dealing with the ruins of their belongings, their house is safe. They are safe. Their pets are safe.

They were able to call the fire department and get people there ASAP to stop the flames.

And even though it was windy and conditions were tough, the firefighters did an amazing job.

Of course, none of this would have been possible if Hank hadn't started barking.

Freakin' Hank! Hank the Hero dog! Hank saw the yard, felt the heat, and knew that his family was in danger.

He barked, and he saved everyone. Not to mention, he also probably saved the house. If he didn't get his family's attention when he did, we'd be telling a much different story right now.

Needless to say, Hank can eat all the shoes he wants now. He is the goodest of good boys.

Not only is this story inspiring and heartwarming, but it's also a lesson for everyone. Everyone should have a Hank.

Obviously, the whole internet could not get enough of Hank the Hero dog.

It's OK if you have to take a second to wipe your tears away and to catch your breath. I know I had to the first time I read this story.

I know that we all want to meet Hank now, but that won't be possible for most of us.

He's a hero! A celebrity! He deserves all the treats and hugs and sneakers in the world.

To make the story even better, other people started sharing pictures of their own Hanks.

Literally, there are so many dogs named Hank! And they all want to give Hank the Hero dog a high-five with their paws.

Look at this Hank!

This Hank picture was also taken six years ago, just like the first picture of Hank the Hero dog. Now, he's a giant Great Dane.

This Hank knows how to hang in the back of a truck.

I just love all the Hank support that people are posting! It warms my little heart so much.

This Hank is so smushy!

And he looks remarkably like Hank the Hero dog! The same coloring and everything. Hanks are the best.

He's definitely big. I have hereby dubbed him Hank the Tank! I think the nickname suits him.

This Hank is giving Hank the Hero dog his undivided attention.

This little pup is so inspired by Hank the Hero. He wants to be just like him someday.

This Hank is adorable.

And even though Dalmatians are historically firehouse dogs, his owners don't seem to think he would have been much help in a serious situation.

This guy's a Henry.

And apparently, he wouldn't be much use in an emergency. He's lucky he's cute.

A Hank look-alike named Cali also wanted to offer her support for the hero pup!

I have to say I'm really digging this trend of people sharing pictures of their dogs in reaction to this story.

KC is doing her part to help her owners get in shape! She's a future hero dog if I ever saw one.

What a cutie patootie. Hank deserves this trail of accolades and support. I just can't get over this story.

Otis. Otis is perfect. Come for the hero dog story, stay for the puppy pictures, am I right?

Dart is also proud of Hank.

And I'm proud of Dart for looking that good at age 16! What a cute pup.

OK, this face is ridiculous.

It's like Roxy was just told a story about a dog who saved his whole family and his house and his neighbors from a raging fire or something.

Walter may have a droopy, sad face.

But that's just all his extra skin! He's actually smiling really hard inside.

All this love and support was not lost on Hank's family.

Just a happy story and a happy corner of the internet. Share this with someone who needs to smile!