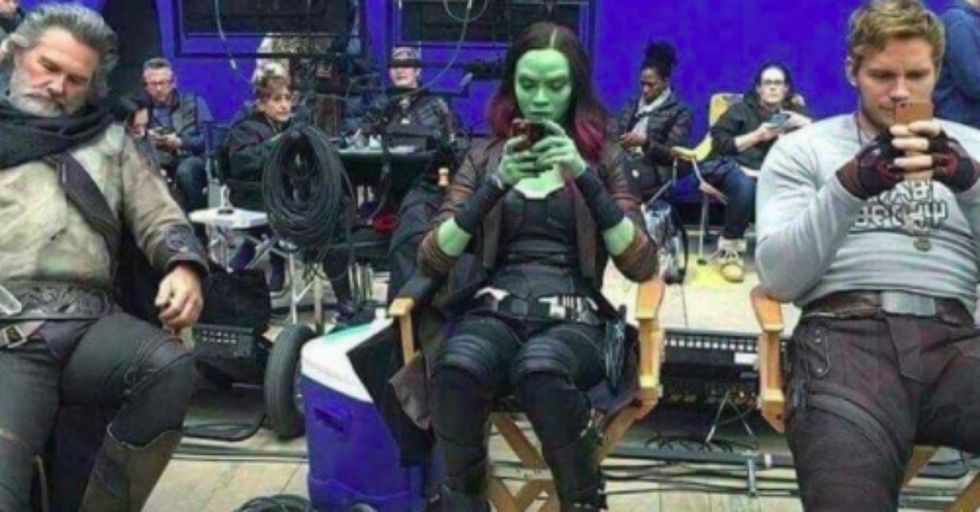 Kurt Russell played Peter Quill's dad and (spoiler alert) a mega supervillain in Guardians of the Galaxy Vol. 2. But when he wasn't busy spreading his seed and taking over planets, he was getting some shut-eye in his director's chair between takes.

In fact, someone was able to snap a picture of Russell snoozing on set, but it's what's in the background of this photo that has people freaking out.

Twitter user @jamiesmart posted this photo of Kurt Russell, Zoe Saldana, and Chris Pratt on the set of Guardians of the Galaxy Vol. 2.

I thought Kurt Russell had a tiny personal hairdresser in this photo and tbh my brain was fine with the idea https://t.co/NjgNyawca0
— Jamie Smart (@Jamie Smart)1507733577.0

"I thought Kurt Russell had a tiny personal hairdresser in this photo and tbh my brain was fine with the idea," Jamie wrote. Look closely...behind Kurt Russell's head...and you'll see...the tiny hairdresser. It's too perfect.

Allegedly, the tiny woman cutting Kurt Russell's hair is actually a regular-sized woman who was walking behind Russell when the photo was snapped at exactly the right moment, but many refuse to believe this.

This Twitter user wasn't cool with us calling her his "tiny hairdresser."

Obviously, she is his "grooming imp." How could we have been so stupid and disrespectful?

The puns were strong with this commenter.

This Thing might be going Overboard. Let's hope Russell doesn't get wind of this, otherwise, his anger levels will be Sky High. I mean, he's going to be Furious 7, and we don't know about you, but we're not Death Proof. "Here lies the person who dared to make fun of Kurt Russell," it will say on our Tombstone.

But we just can't help ourselves. The photo is so good.

We all want it to be true, too. Honestly, we'd believe it if it was. Kurt Russell has some luxurious locks.