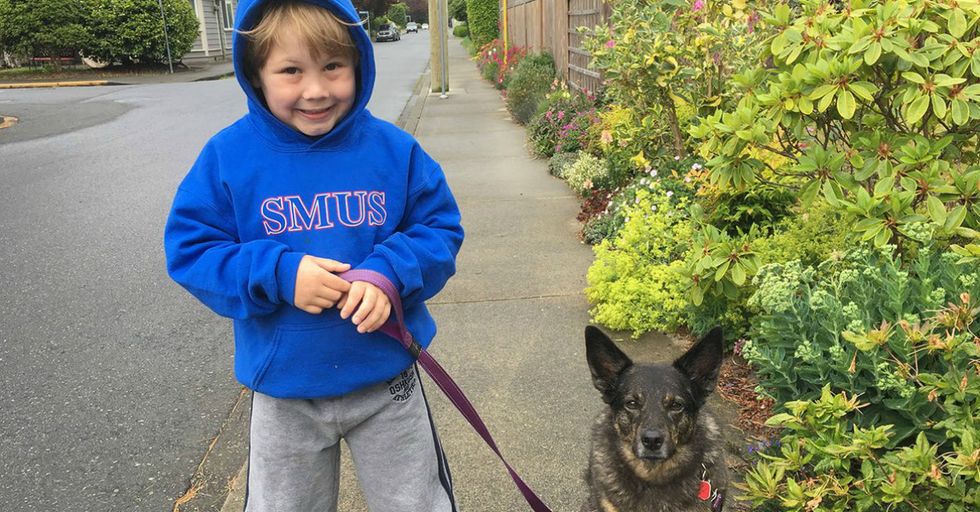 What happens when a kid invents a word? Naturally, a legend of television takes on the cause, the whole thing goes viral, and Oxford Dictionary adds it to their "words to watch" list. OK, so this hasn't happened to any of the words my kids have invented, but they haven't cleverly discovered a real phenomenon that has no name like 6-year-old Levi Budd did.

If you have kids, then you know they ask questions. So many questions. Constantly.

Luckily, we have Google, Siri, and the good old dictionary at our disposal as parents. We look up facts and figures and definitions as our kids' curiosity quickly outpaces the content of our brains. But what happens when there is no answer?

That's what happened to Jessy Friedenberg and Lucky Budd when their 6-year-old son asked them what it's called when a word spelled backwards makes a different word.

Levi Budd noticed the phenomenon when passing a stop sign. Stop spelled backwards is pots. What's the word for that? Turns out, there isn't one!

A word that is the same backwards and forwards is a palindrome.

@OxfordWords @lucky_budd @WilliamShatner Who knew there was not a word for this! ? Takes an inquisitive kid!!
— Liseanne Gillham (@Liseanne Gillham)1511557774.0

And why shouldn't it be named after the kid who realized there was no name for this type of term? His father posted a video to YouTube about levidromes, and probably never imagined what happened next. People saw the video and were all on board with the new word.

And then, William Shatner happened.

Dearest @OxfordWords I just sent you an email about #Levidromes - a word that when spelled backwards, turns into a… https://t.co/A6y9Y46iF1
— William Shatner (@William Shatner)1510162743.0

Shatner reached out to Oxford Dictionary suggesting that the word be added to the dictionary. And then the story took off in a way that is uniquely Twitter-ish and modern and viral. And Shatner? Well, he's invested in this word now.

This is Shatner's response to a Tweet that said, "Love the little boy who coined #levidrome, but #palindrome is the word that already describes these words."

Actually you do not understand the definition of a #Levidrome. Words like stop, pal, and dog are not Palindromes.… https://t.co/4MTqTGS8nV
— William Shatner (@William Shatner)1511847680.0

Shatner has defended and clarified the word levidrome several times. He's also sent out several Tweets full of levidromes and repeated appeals to the dictionary. Because of course William Shatner is involved in this. Anyway, things got real.

#Levidrome, a name for a word which makes a different word when spelled backwards, was brought to our attention by… https://t.co/PpV36IGXrx
— Oxford Languages (@Oxford Languages)1511453938.0

This editor from Oxford Dictionary explains how words are added. Turns out, it takes a little more than a message from Captain Kirk. The word has to be adopted and commonly used. Challenge accepted.

The story of Levi and his levidromes has been featured on news sites in places as far as New Zealand and India! Everyone wants to see this little boy's word make it into the dictionary. And, it's super fun to tweet out levidromes and hope that William Shatner responds.

It helps that Levi's dad is a master promoter.

Lucky Budd is a Canadian author, so nerding out about words is entirely his bag. He clearly also has a knack for publicity because all of this started with his YouTube video. This is a tweet from a Canadian PM about levidromes!!

We hope the word levidrome continues to trend.

How awesome would it be if this really makes it into the official lexicon? With the splash it has made worldwide, and the continued help of influential people like PMs and freaking Shatner, it's well on its way! Good luck, Levi!