The Internet Can't Decide If This Guy's Chipotle Hack Is Brilliant or Selfish! | 22 Words 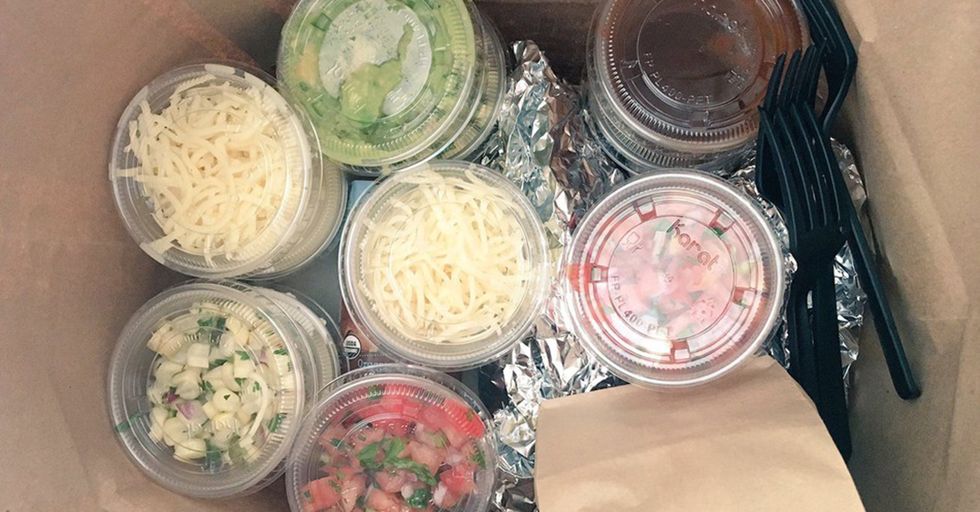 The Internet Can't Decide If This Guy's Chipotle Hack Is Brilliant or Selfish!

Many social media users have created a sort of marketplace for sharing their own hacks and tips on how to get special items from national chains or even ways of ordering that ensure you get more food than you would have otherwise.

Most tips come and go without issue, but this guy found himself amid a lot of controversy when he posted a tweet about his preferred way of taking a Chipotle order home.

Here's his original tweet, complete with a picture of his packed order.

Nothing offensive on the surface and he doesn't really state his reason for doing things this way, but Twitter responded as either ardently for or ardently against the practice, citing a number of reasons.

He asks if he's a genius or just weird, but most people weighed in suggesting that he's just awful.

Waste, in one form or another, was a big factor. This person cites the wasted materials needed to pack up as many as a dozen ingredients that go into an order.

Others talked about the wasted time and effort required to accommodate this bizarre request.

The original poster explained that he didn't want his tacos to be soggy by the time he got home.

Of course, not only does it waste the time of the employees working, but by doing so, it wastes the time of the people forced to wait in line behind the person asking for this treatment.

Others pointed out that in the time it would take to assemble this order, he could probably eat his food there.

Sure, it's maybe not what he wants to do, but I'm sure the employees and people in line behind him would thank him.

The guy with the "hack" wasn't having any of it, though.

He remained defiant for no other reason than the fact that he could. I guess if you can get away with it, it's "allowed," but that doesn't make it cool to do.

He explained that he had kids at home.

Which...I guess is as an explanation of...something. But now it's unclear if he's doing this for his sake or the sake of his kids.

Some people got on the program, however.

But they still admitted it was a terrible imposition on the workers to pack up twelve or so little packages of food for just one customer, regardless of where their kids were or how they liked their food.

But the hacker stuck to his guns, maintaining a fairly happy disposition throughout this trial by fire on social media.

He came up with three overarching takeaways, as you can see in the tweet above. So what do you think? Is this a jerk move or a clever way to keep your food fresh to go?