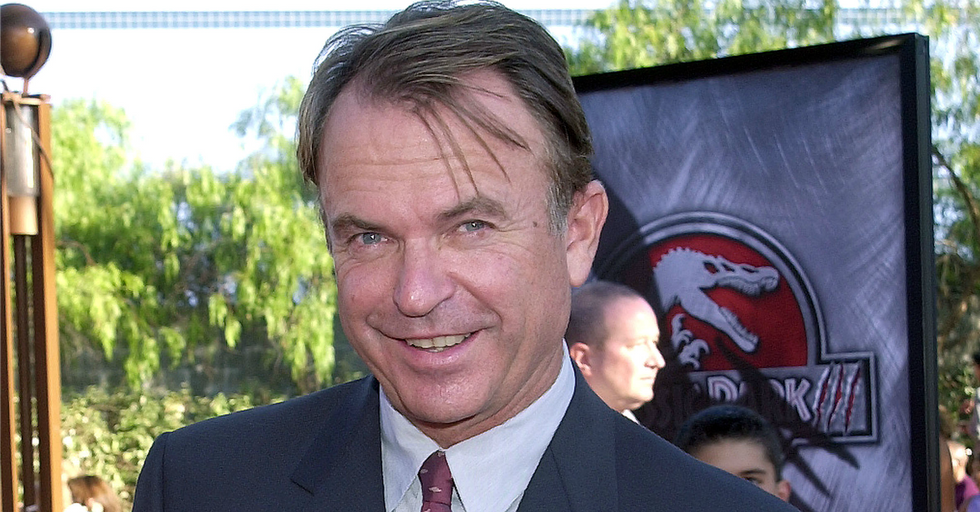 Sam Neill played a paleontologist in the original Jurassic Park, Steven Spielberg's film about a select group of scientists who travel to a theme park filled with dinosaurs. In the movie, dinosaurs break loose from their enclosures on a jungle-covered island.

He was on a similarly jungle-y island the other day when someone asked him a curious question...

By the way, Sam Neill was also in Alcatraz, a television show where inmates mysteriously disappeared from their cells.

Another island with a defective security plan! Is that a coincidence, or does Sam Neill have a face that casting directors see and say that's someone people want to see on an island with a downed security system and something dangerous on the loose. It's curious, just saying...

Anyways, back to the island at hand...

Sam Neill was in Honolulu on the island of Hawaii yesterday trying to rent a car for his trip. Jurassic Park (1993) was filmed for the most part on the Hawaiian island of Kauai.

He tweeted after the man behind the counter at the rental car place asked him a question...

Man behind the Car Rental desk Honolulu airport asked us if we wanted to try "The Jurassic Experience". I said nothing.
— Sam Neill (@Sam Neill)1508776635.0

He didn't say anything in response to the man's question, but Twitter users had other ideas for what his response should have been.

Twitter user @MaSenn suggested that Neill should have said, "And I bid you good day, sir," donned a dinosaur costume, ran, jumped, and did a flip into a floating lifeboat. A simple request.

@TwoPaddocks You should have replied "No force on Earth or Heaven will get me on that island." #JP3
— Jurassic Quotes (@Jurassic Quotes)1508781906.0

They said Neill should have said, "No force on Earth or Heaven will get me on that island."

He could have said, "Son I AM the Jurassic Experience" according to Laura Reilly.

One man thought that despite all the other suggestions, Neill himself had the most appropriate response.