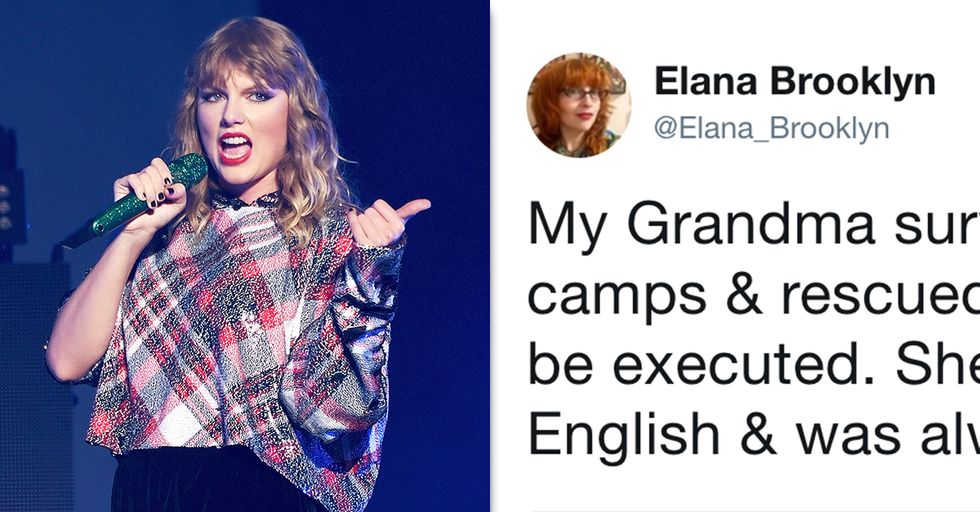 Taylor Swift has been having a banner year. After being #cancelled when Kim Kardashian outed her lies about Kanye West's "Fame" video, and being adopted as the "Aryan Barbie" of the alt-right movement, Swift has reinvented herself into a (supposedly) darker, edgier Swift.

The ploy has worked. Swift's newest musical outing, "Reputation," has spent the past three weeks at number one and is well on track to become one of the biggest albums of the year.

This may have been the motivation behind Twitter user Nutella's question, "Name a bitch badder than Taylor Swift."

And when Twitter responded, boy did it respond. As it turns out, there are lots of bitches way badder than Taylor Swift, and some of them aren't even human.

Her cat? Her cat can't even really be classified as a "bitch," because Felis catus is wildly incompatible with canis lupus familiaris (dog). They aren't even in the same family tree, but if she feels this way, she feels this way... we guess.

Other Twitter users had more serious answers to the query. And by serious, we mean historical.

Umm, why didn't we learn about her in Pirates of the Caribbean? They had all kinds of undead pirates on there, not to mention mermaids and the occasional goddess, but they didn't see fit to include this actual goddess? Fail.

This Twitter user highlighted a renegade, a trailblazer, an actual freaking hero.

So she killed 10 men in duels and seduced a nun? And burned down a church, you say? Fighting the man, taking the woman. Legend. Pure legend.

Some responses were stories we already knew, but were pleasantly surprised to encounter again.

Lest we forget, Ida B. Wells was freaking amazing. Without her seminal work on lynching, we would not have as complete an understanding of the processes of oppression in the American South. Wells, during her lifetime, proved that lynching was actually a method of oppressing black people rather than punishment for crimes, as it had so often been claimed. Hero.

Other responses highlighted women we'd never heard of before, but were delighted to discover.

What was glossed over here is the fact that she was gang-raped for several days after which she came back with her gang and slaughtered the men that raped her, then spent eleven years in jail, became a government official – twice – and was shot to death in 2001 by members of a rival gang.

Other responses blew our minds so hard, we had to go look the person up.

This remind you of anything? "When people ask you what happened here, tell them the north remembers. Tell them winter came for House Frey." Remember that?

Some reminded us of details we'd forgotten about our heroes.

We all know Harriet Tubman is a beast, but we probably don't remember that her skull was crushed, or that she was left without medical attention for two days. This is just a reminder of the suffering our heroes went. through to become who they were...

One person stated what should be the most obvious answer of all.

No disrespect to Taylor Swift, but this is totally true. Each of us, in our own way, is a badder bitch than Taylor Swift. While she is undeniably a force to be reckoned with, we all have our own hidden well of bad-bitch-assery just waiting to pour forth.

The entire thread was so good, people began calling to make it into a book.

Or a TV series, or a movie. The point is, people need – nay, deserve – a book (or TV show or movie) filled with anecdotes about amazing women. This thread could have just as easily been about Beyonce, Cardi B, Barbara Streisand, Marilyn Monroe – it doesn't matter. The point is that women across the ages are amazing, and people love to hear about them.