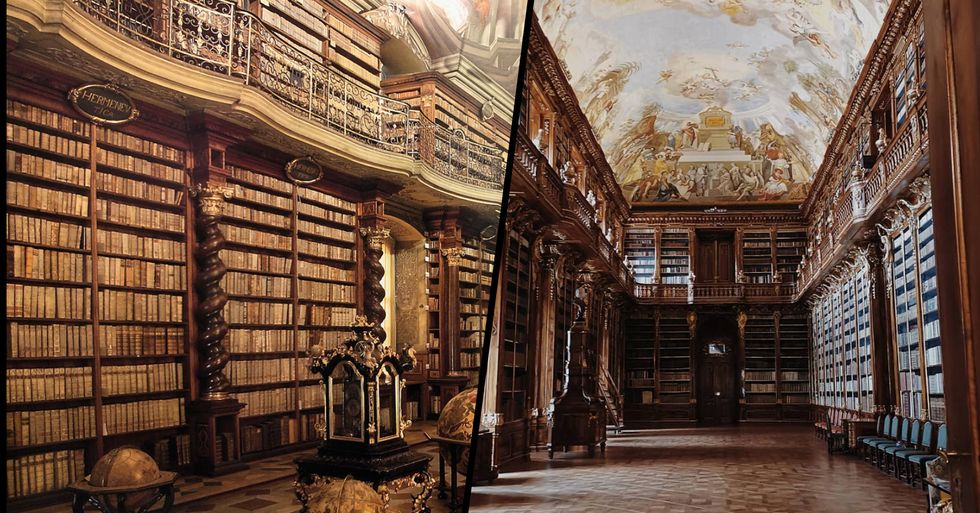 Prague is known for many things - The vast history, the delicious food, the copious amounts of beer... And apparently the libraries?

Yep, an ancient library that has been standing in the middle of the Czech capital since the 1700s has been gaining a lot of attention from travelers for its stunning architecture and aesthetic.

Keep scrolling to see this beautiful building for yourself...

Prague is a pretty magical place.

The bustling capital of the Czech Republic has long been a hot spot for avid travelers and tourists for decades.

The ancient city is simply bursting with history and culture, with endless things to see and do.

And not to mention the cuisine...

The Czech Republic is famous for its high standards in food and drink, and the city of Prague is no exception. Did someone say dumplings and endless pints of pilsner?

But, putting all the beer aside, their architecture is one of a kind, too.

Many parts of Prague, including it's Old Town Square, has remained relatively untouched since the 10th century.

This means there are some seriously historical buildings to be seen and explored...

Some that are older than our entire country, in fact.

Prague has, arguably, some of the most beautiful examples of historic architecture in the world.

Which brings us to the whole point of this story...

Now, I know what you're thinking - Have I scrolled this far to just read about an old library?!

This isn't just any old library.

This is the Klementinum library.

Also known as the most beautiful library in the world.

But, thanks to the tremendous quality of care it has received from dedicated library workers and bookkeepers, it hasn't aged a day.

Including a vast collection of historical Czech literature, including works by the famous Biblioteca Nationalis.

Oh yes, I could settle down with this ancient read...

Or maybe not, on second thoughts.

But even if you're not the biggest book worm...

The stunning decoration and aesthetic should be enough for a justified visit.

The ceilings are some of the most admired aspects of the library...

Which were painted by the acclaimed artist, Jan Hiebl.

It is completely out of this world.

Be right back, just booking a one-way ticket to Prague... For more phenomenal architecture that will put our country to shame, keep scrolling...