The Internet Is Going Wild for Inflatable Latex Pants | 22 Words 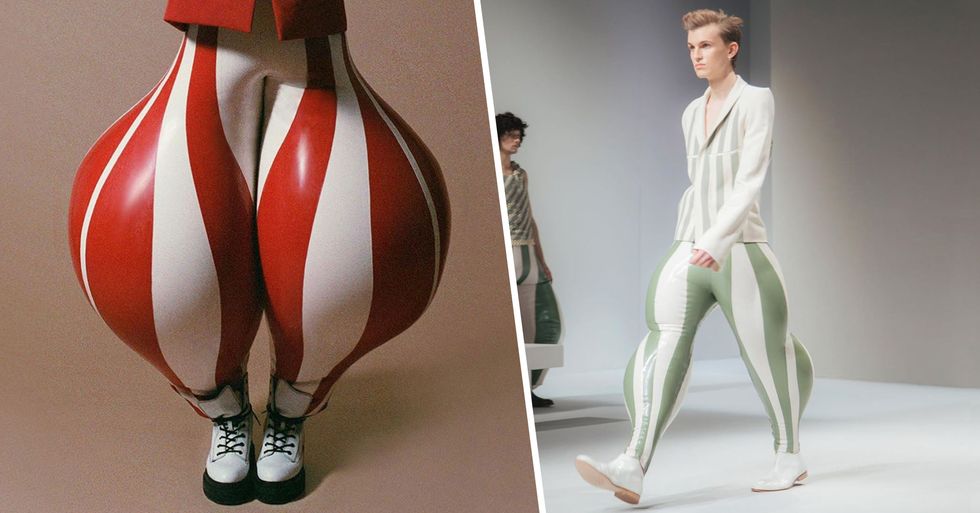 The Internet Is Going Wild for Inflatable Latex Pants

The world of fashion is one that is constantly evolving with trends popping up left, right and center. From big-name designer brands venturing into risky territory to local businesses trying to match up, the industry seems to be over-doing it, but that's nothing new, is it? I can't even keep up with it all.

There are some things that I can put up with, but most of these are just too ridiculous to turn a blind eye to, so I'm going to share them with you. Here are some of the most ridiculous fashion trends right now, including the inflatable latex pants...

They might be the worst but most intriguing trend yet...

I'm not saying that there's anything wrong with these tops, but... well, I am. These should not be a thing and I will not support any male that wants to be a part of the crop-top movement.

It's the pockets that don't do it for me. What are you supposed to keep in there? Your keys? And the price really isn't going to work out for me either. These boots are currently being sold for one thousand six hundred dollars.

Just when you thought that crocs couldn't get worse - they do. And these ugly shoes will cost you over 500 dollars. Save your hard-earned money and go get yourself a pair of flip-flops.

Imagine walking down the street and stepping in a puddle with these on. Soggy sheepskin shoes. How appealing.

I might as well mention this while I'm out here talking about fluffy trends. Fluffy eyebrows weren't too bad until people tried braiding them. Then it all became messy.

This is another one that you either love or hate. After crocs with sandals, we obviously have to mention socks with sandals in general, because the trend is well and truly a thing in society now. After seeing these sheer socks paired with cheetah print platforms, honestly, I'm sold.

Balenciaga has been known for its weird fashion trends, but it doesn't get much weirder than this. Car mat skirts. It's a no from me.

Double denim is already quite risky, so why the hell would you want to wear these out? And for 500 dollars?!

That's it, just the sleeves. For those summer days when you're missing winter.

Would grown adults buy themselves a pair of these? ASOS seems to think so.

Metallic meggings (leggings for men) have made a comeback and we still aren't here for it.

Credit where credit is due, this is pretty artistic. And it's good for adding an extra foot to your height. But I don't think that I'll be walking around with flowers on my head any time soon.

I'm just going to leave this here and move on... Lace shorts for men are an actual thing and they come with a matching lace shirt for all of you that want one!

Yes, you read that right. Muddy jeans. Jeans with mud on them. You'll be happy to know that it isn't actual mud, just a design. But that doesn't make them any better. Why on Earth would you spend four hundred and thirty-seven dollars on dirty jeans when you can probably by a pair for ten dollars and roll around in dirt? It's basically the same thing.

If you find yourself loving the jeans, here's a matching jacket for you, so you can get the full muddy look. Don't be shocked, both items are currently sold out on the website. Yes, there are people out there actually paying 500-odd dollars for these fashion disasters.

You really thought that I was done telling you about ugly shoes? Because I'm not. I present to you, the Ugg Sandals by Ugg and Teva, the ugliest shoes to ever grace the planet. I would rather wear a pair of Crocs (with the socks!) than walk out of the house in these and that's saying something.

And 2020's most weird trend at the moment has to be these inflatable latex pants.

They were designed by Harikrishnan.

Harikrishnan is currently studying a master's in design and for a show at London College Of Fashion, he decided to pair the unique invention with cropped and full-length blazer jackets and vests just to ramp the style aspect up another notch.

But you know what? We're actually here for it.

As weird as they may look, these pants have become the latest source of inspiration for a lot of people. Someone commented about how these pants are the visual representation of them after "leg day" at the gym.

If you're wondering how they get so big, here's how.

There's a 7 millimeter-wide inflation valve at the bottom of the pants which is where air is pumped into them.

But there is a deeper meaning behind them than just inflated pants.

Speaking to Deezan, the designer revealed the inspiration behind such a daring fashion faux pas. "I got the idea when I was playing with my dog and I started thinking about how exaggerated objects must look from such a low angle."

“The thought of him seeing me as a giant figure or not seeing my head at all was intriguing, so I decided to reimagine the people around me through the game of distortion – detached from the stereotypical, pre-determined notions of the human perspective."

Even though the final result may look like something out of Willy Wonka's chocolate factory...

But you know what? They've made it to the runway, and most of us haven't so can we really talk?