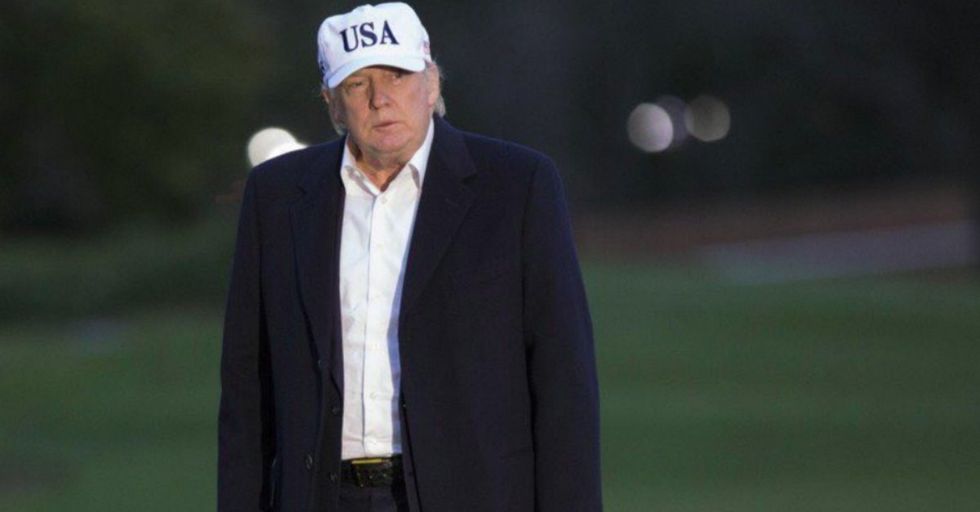 Sometimes you just have to let loose, which is exactly what happened to this Late Show writer when he encountered a photo of Donald Trump that was... less than flattering. What resulted was a hilarious Twitter thread where he couldn’t pick just one joke to make about the photo, so instead he opted to make them all.

Daniel Kibblesmith, a writer for The Late Show, was particularly struck by a photograph of Trump returning from Camp David this week.

He tweeted out the photo, which shows a slumped-shouldered, glassy-eyed Trump wearing a white USA hat and captioned it “This is a real picture of the President of the United States, today."

Then the writer decided the photo wasn’t enough on it’s own, it needed some commentary for his audience to really understand how it made him feel.

The photo just reminded him of so many things and once his juices started flowing, he couldn’t stop. He had too many jokes for one caption.

His first assessment was it looked like “a five year old drew what a president looks like."

The slumped shoulders do look like a child just learning to draw who isn’t 100% clear of the appropriate length of necks. And they would definitely include that USA hat because otherwise how could you distinguish him from a president of not-USA?

Next he thought that Trump looked like he was crashing a funeral for the shrimp.

Admittedly we don’t totally get this: is there a Donald Trump shrimp scandal we missed? *Googles furiously* How can you keep up?! Or maybe he’s just saying that this disheveled Trump would probably show up confused to a low country boil and mourn the ingredients.

Moving on from shrimpscapades, he then tweeted that he “looked like Tommy Wiseau’s dad."

Tommy Wiseau is the director of the cult-classic film The Room — a movie that is said to be one of the worst movies ever made.

Wiseau has a peculiar look and is often spotted sporting jackets that make his shoulders appear several inches larger than you would expect the width of his, or any normal human’s, shoulders to be.

Trump does have that elongated shoulder look going on here. Maybe he was just channeling the businesswomen of the '80s?

His next tweet was an imagined conversation between Trump and the ticket seller at a local movie theater.

Trump has definitely 100% seen Boss Baby and would like to give that baby even more tips on how to be a better business baby. Look, there’s nothing wrong with going to the movies by yourself (you don’t have to share popcorn, for one thing). But nobody wants to be the adult man who exudes the look “I see children’s movies alone."

He also thought Trump looked like maybe he had no idea where he was.

While funny, this one may be sort of true, some people suspect that Trump may be suffering from dementia due to his recent slurring of words and decreased vocabulary.

Some people in Kibblesmith’s Twitter thread even pointed out that Trump’s photo reminded them of relatives with dementia or Alzheimer's.

But, back to the lighter side, he then tweeted that it looked like Trump was holding up the line at a Las Vegas Starbucks.

We’ll be damned if Donald Trump has never made a barista re-make his mocha frappachino until it was just the way he liked it.

Raise your hand if you ever had to wear old person make-up in a school production of Oklahoma.

...and then kept it on after the show because you thought it looked kind of good and you didn’t know how to do real make up yet.

Then Kibblesmith got kind of real and pointed out that actually Trump looks like what he is: someone being investigated for treason.

Trump claims there is nothing going on between him and Russia but those slumped shoulders definitely could be saying “I am full of secrets."

That hat definitely says “Look! I love America enough to wear a hat about it."

In his last tweet, Kibblesmith imagines the hat was part of a badly constructed plan to get away with Russian collusion.

A follower replied with a photo of Obama looking a little bit more pulled together during his presidency.

And really wearing those shades, too.

Other people had their own “he looks like" jokes to add to Kibblesmith’s line up.

Some joked that Trump looked like he was involved in a reverse Dorian Grey situation.

@kibblesmith @ultrabrilliant Is there a painting of him hidden in his attic that's getting younger?
— Tess Stenson (@Tess Stenson)1513612494.0

In The Picture of Dorian Grey a painting of him ages instead of Dorian himself, so this would be the reverse situation which actually would just be... regular aging, but still.

Other people thought his look reminded them of something else, like the shrunken headed man from Beetlejuice.

There was concern for Trump’s headware, as well.

It does look pretty sad.

It was definitely not a great look for Trump, but at least he still looks better than his figure in the Hall of Presidents.

Disney reopened the Hall of Presidents this week and unveiled Trump’s figure and it looks a little tired if we’re being polite and not completely human if we’re not.

Some people weren’t happy with Kibblesmith’s thread, but he took it in stride.

His response when a user wrote, "I agree that he looks disheveled, but you are an adult man who has a snowman, swords, and a dinosaur in your official Twitter handle. Don’t throw stones." Come on, it’s 2017. Don’t they teach emoji in school by now?