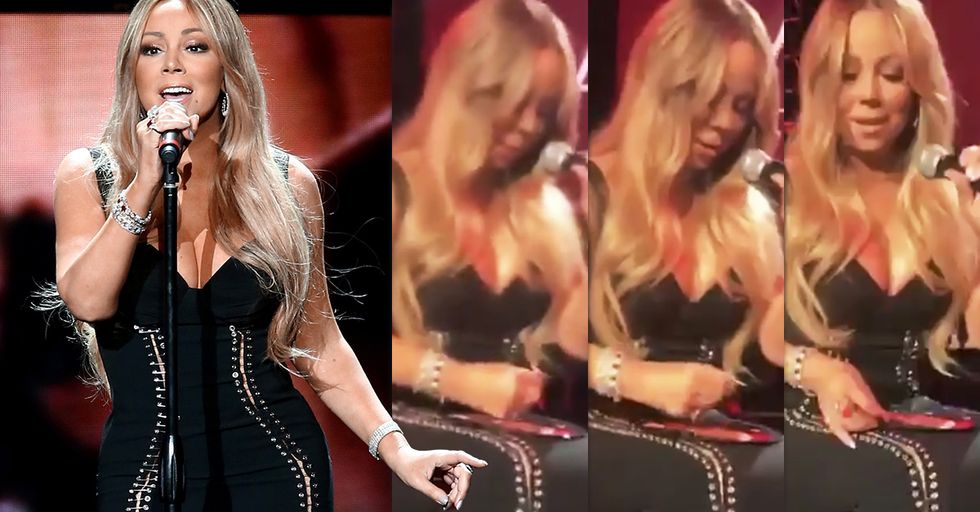 We all know Mariah Carey is the undisputed Queen of Christmas. That one's not even up for debate. However, new evidence has surfaced that may prove the singer is actually the Queen of Everything, including physics.

It's a throne that not just anyone can fill. But Mariah isn't just anyone. And her throne... well, you'll have to see it for yourself. (Or not see it, as it were.)

All Mariah Carey wants for Christmas is for the world to recognize just how amazing she is.

And she's going to do whatever it takes to get that recognition. You'd think she'd have gotten it already, what with creating the no. 1 Christmas song of all time, but no. She had to do something more.

So she did this:

She stopped mid-concert to sign autographs for her fans. 'Cause that's just how Mariah rolls. But that's not all she did.

At first glance, you probably thought Mariah was sitting on a chair as she signed those autographs, right? Well, she wasn't.

Here's a screenshot. Check it out:

No chair. She's sitting. On nothing. There's no chair there.

We had our official 22 Words researchers create a super-scientific render of what the chair would have looked like, had Mariah actually needed one.

As you can see, the chair would have supported Queen Mariah. But she has no need for such primitive technology. As you can imagine, the internet had all kinds of reactions to Mariah's ability to conjure a comfortable seat from the ether.

Some people went on a hunt to find her missing chair.

You can hunt all you want, but there is no chair. The chair is not there. A chair? Nowhere! We're not writing a Dr. Seuss book, here. We're just reporting the facts.

Some wondered whether Mariah actually has an invisible chair at her disposal.

It's not the craziest theory we've ever heard. She certainly could afford it. Especially after the multimillion-dollar windfall she received for suing her ex-fiancé.

Which adds up. She can already sing better than 99.9 percent of all humans, so it only makes sense that she'd also be better at squatting than the rest of us.

This Twitter genius thought she had the mystery completely figured out:

Anyway, if you ever want the ability to act like Mariah, you're gonna need to start a serious squat regimen.

And then immediately give it up. Who do you think you are, Mariah Carey?