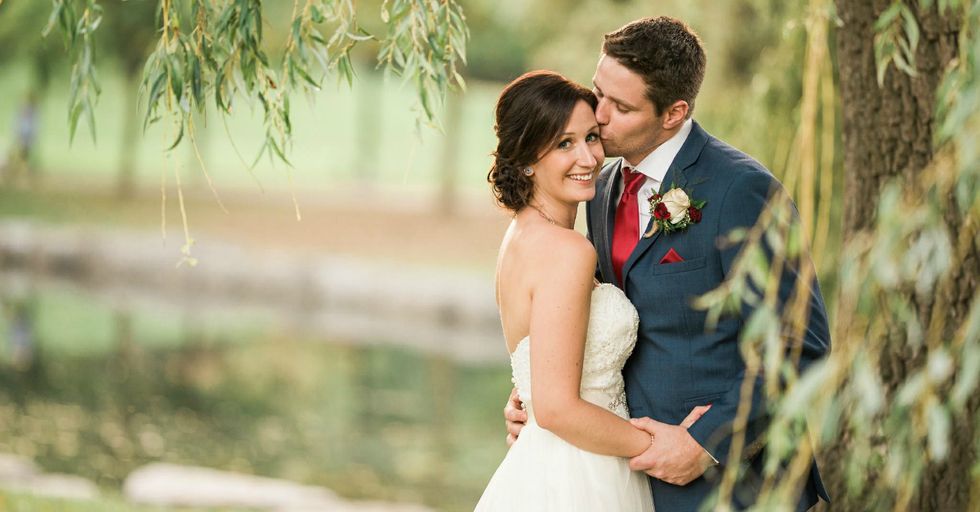 Anyone who's had a wedding knows how much meticulous planning goes into the big day. From finding the perfect gown to picking flower arrangements to figuring out whether to hire a band or a DJ, the minute details of putting together nuptials can be downright stressful. The good news is you can give yourself plenty of time to plan for all of the important things.

The bad news is that you can't plan for everything.

Recently, one couple faced the ultimate last-minute challenge, and it involved actually saving a life on the same day they said "I do." Luckily for everyone, the groom was up for the challenge.

It would have been really easy to be distracted.

A few things make this amazing story stand out, and one of them is the focus of the groom. With about a thousand pictures to take and vows to remember, it would've been easy to overlook anything going on in the busy park where this wedding party happened to be taking pictures. Most people have a tough time just remembering where they put the rings.

Fortunately, this groom was on his toes instead of lost in a wedding fog.

Thankfully, Clayton Cook was the type of groom who could seriously multitask. As he smiled and posed for wedding photos, the Ontario native was able to keep a close eye on his surroundings and be hyperaware of what was going on around him in the busy public place.

He could've shrugged the nearby kids off, but he didn't.

No one would've blamed Cook if he hadn't noticed the kids playing in the park where the wedding party was taking pictures. But he not only noticed, but paid close attention to where they were playing. He recounted to the BBC, "For several minutes these kids were following us, and I was just keeping an eye on them because they were standing close to the water."

Thankfully he kept a close eye on them.

Because he'd taken the time to pay attention, Cook was immediately aware that something was amiss.While his bride was having her time with the photographer, he was able to assess what was happening. "Then while Brittany was getting her solo shots taken I realised only two were standing on the rock ledge," he said.

Without hesitation, he knew it was time to act.

Able to connect the dots at lightening speed, Cook was able to evaluate the situation and immediately spring into action." He says, "I saw the boy in the water struggling to keep his head up. That's when I jumped down." He may not be the most efficient groom in history, but it's possible.

The photographer caught all the heart-stopping action.

Darren Hatt was the wedding photographer on the scene that day. When Cook had to go into the water, Hatt's attention was quickly drawn away from the beautiful bride and trained on the terrifying situation in the water. He related his account to the BBC. "As soon as I could turn around he had already plunked him on the ground outside the river."

The pictures say it all, and the internet agrees.

Hatt's amazing photographs have now gone viral, and for good reason. In the picture above, Cook is shown post-jump and soaking wet, his grip tightly holding onto the little boy who fell in. Although terrifying, Cook's response to the brave action was unassuming and admirable. "I just kind of plucked him out and he was okay," he said. He may have ended up with a wet suit, but it was all worth it. No groom expects to end up with his wedding-day outfit sopping wet and clinging, but Cook's heroic rescue overshadowed everything else. This little boy was extremely lucky to have such an alert and brave onlooker to fish him out just in time. In the blink of an eye, things could've easily gone much worse.

Social media agrees that Cook went above and beyond.

@CTVNews Outstanding! Great job! Once a hero always a hero! Minor delay for the wedding but for a good reason!
— Laura Lapointe (@Laura Lapointe)1506304885.0

When the internet caught wind of what Cook had done, there was nothing but praise for the amazing groom, as his selflessness is hard to ignore. Twitter user, @LauraLapointe26 summed up admirers' thoughts pretty well when she posted this tweet. What's a little wedding delay when it means saving a life?

The bride and everyone else surely agrees with this sentiment.

If Brittany Cook had any reservations about her future husband's courage and quick thinking under pressure, there's no doubt the day's events put them to rest. When asked about her new husband's heroic act, the bride said, "We'd like to think most people would probably make the same choice. Twitter user @The_Real_G_S put it well when he called Cook a a superhero. We have to agree.

All's well that ends well. And everything seems to be fantastic.

Brittany Cook spoke lovingly about her husband and his now-viral save. It's hard not to imagine these two aren't meant for each other. "That's Clay to me," she said. "It's something he would just instinctively do." We wish the hero and his bride the best.