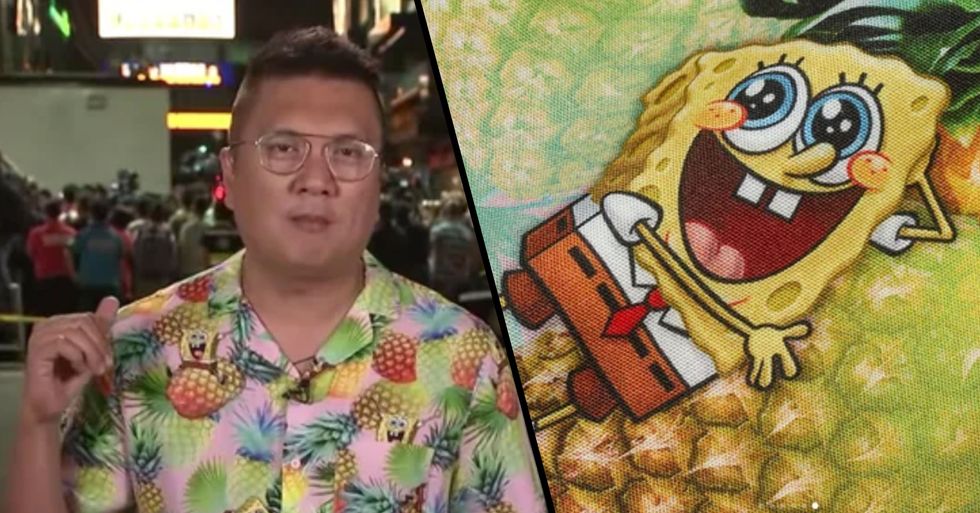 We all know that, when it comes to novelty t-shirts, there's a time and a place. Well, most of us do, anyway.

A reporter from the Philippines has received the viral treatment this week after he delivered a rather serious report on an on-going hostage situation... All while wearing a rather ridiculous Spongebob-themed Hawaiian shirt.

Keep scrolling for the full story, and to see his bizarre broadcast for yourself.

In their day-to-day work, news reporters face a tremendous amount of pressure.

And that includes the reporter's aesthetic.

And some are about the more practical attire...

Because you never know what conditions a reporter is going to have to deliver the day's news in.

But, there are some reporters out there...

Who couldn't care less about what they wear into work.

Because it's the news that's the important part, isn't it?

Well, that is evidently what one reporter in the Philippines thought, anyway.

A reporter for the Phillipino news channel, TV Patrol has gone viral this week for his broadcast about a hostage situation.

Jeck Batallones was reporting live from San Juan City regarding a hostage-taking incident in a Greenhills mall on Monday.

But people were a little distracted from the otherwise serious broadcast...

And it was all thanks to Jack's rather questionable attire.

For his shift that day, Jack had settled on a Spongebob Squarepants themed Hawaiian t-shirt.

We can't make this stuff up.

A part of Jeck's brain had deemed this monstrous shirt as acceptable for his evening shift...

And he went on to deliver a serious report about the hostage incident behind him... All while wearing the floral, Spongebob-emblazoned number.

It really is very distracting, isn't it?

Who can even focus on what he's saying what that t-shirt is staring you right in the face?

And he, and the shirt, were quick to go viral, with many dubbing the reporter's confidence "admiral" and "inspiring". I mean, his confidence to wear such a statement piece of clothing is admirable in itself...

And it made many of us beg the question...

Where can we find our own Spongebob Squarepants floral t-shirt?!

Someone found the t-shirt! I love the internet sometimes.

You have the retail giant, H&M, to thank for this wonderful piece of clothing.

Simply labeled as "patterned shirt" on their website, the shirt is worn casually on a model over a plain white tank top. Fashion.

It's a truly wonderful design.

You can get the shirt in a delightful blue design, too.

Or you can simply opt for the Scarface version.

You know, if Spongebob ain't your jam.

You can watch the full broadcast here...

It truly makes for some excellent television. For more news reports that were unintentionally hilarious, keep scrolling to read about the poor, unsuspecting reporter who accidentally left his face filter app on while broadcasting live...