The Internet Is Outraged over Harambe the Gorilla's Replacement | 22 Words 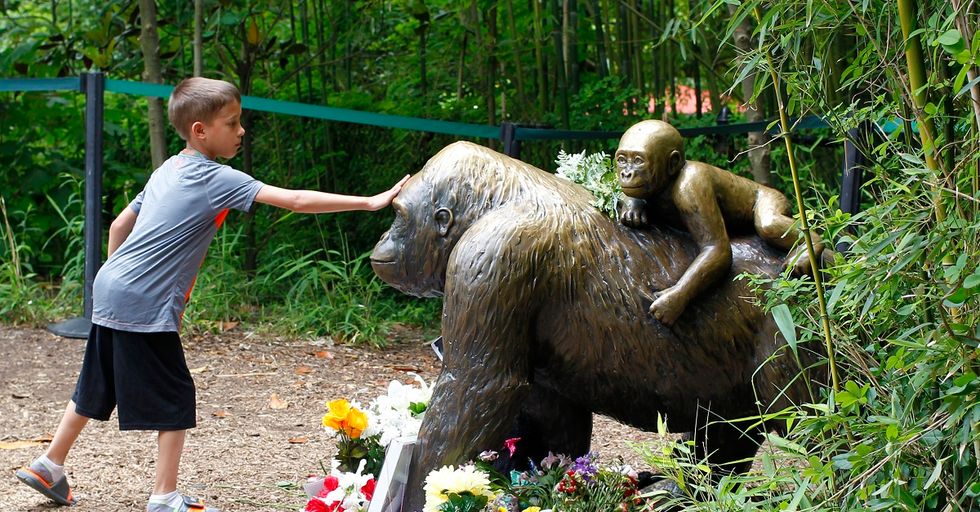 The Internet Is Outraged over Harambe the Gorilla's Replacement

The heartbreaking demise of Harambe the gorilla shocked the nation, opened up difficult conversations about zoos and parenting, and also sparked a million terrible jokes.

Now, a new gorilla has moved in at the Cincinnati Zoo, and understandably, people have mixed feelings about it.

Harambe might be the most posthumously famous gorilla in the world.

He was shot and killed in May of 2016 after a 4-year-old boy fell into his enclosure, and the zoo was forced to take lethal action. At the time, the zoo argued they had no alternative, given how strong and unpredictable Harambe was. It's the kind of situation in which there were no winners, just sadness. Oh, and gifs.

But the zoo recently announced the arrival of a new gorilla: Mshindi

Mshindi is a 29-year-old silverback who was transferred from Louisville. He'll join the two females currently still residing in the Cincinatti Zoo's gorilla enclosure. Though this would normally be a cause to celebrate, the announcement has had some mixed reactions.

Apparently they worry the zoo hasn't learned its lesson from what happened with Harambe. Or they think this zoo just shoots gorillas for fun. It's honestly hard to tell.

Some acknowledged that no one could ever replace Harambe.

It's definitely the case that the spirit of Harambe looms large over the Cincinnati Zoo. His death is certainly not the way the zoo would've liked to have made headlines. But maybe this is a step towards healing for everyone.

Others balked at how quickly the zoo seems to have moved on.

As any animal lover knows, there's simply no "replacing" a beloved pet or zoo animal. Anymore than you can replace a lost family member. Still, hopefully zoo goers welcome Mshindi, who many pointed out might be in for an awkward transition. In addition to ice breakers with his two new friends, he might have some questions...

Of course, to put his mind at ease, maybe we can point out that the likelihood of another 4-year-old boy crawling into their enclosure is almost nil.

Though, really, they should probably just avoid bringing it up. "Moved on to other opportunities" is always a good generic thing to say.

Others simply offered words of warning.

Though arguably, Mshindi would be better off not watching out for anything. That way if a kid does get into the enclosure again, maybe he won't even notice. The zoo can just get the kid out safely and everyone can go home.

Generally it seems the outlook for this guy on Twitter is bleak.

People really do seem to think zoos just shoot gorillas for funsies. But really guys, most people don't work at zoos because they're hoping to one day get the opportunity to kill one of the animals. If anything, it's the opposite.

Others were at least a bit more measured in their criticism.

Though it might be even more productive to ask parents to be more protective of their children. Or at least keep enough of an eye on them that they notice when they're trying to get into a gorilla enclosure. Not to parent-shame, but it takes a village to avoid having to kill an endangered gorilla, after all.

The question of whether we should keep doing zoos is also on the minds of many.

Zoos: are they good? Are they bad? Are they both because there are many different kinds of zoos and good arguments to be made on both sides? Yes. Though until we're able to protect the natural settings of these animals from poachers and environmental destruction, zoos will likely be here to stay. So what's the consensus?

Let's face it, we're not over Harambe.

We thought we were, but we really just aren't. Even though most of America didn't even know about him until he was killed, his death rattled us as a nation. It divided us, it hurt.

But none of that is Mshindi's fault.

He's probably a great gorilla. And the people of Cincinnati are lucky to have him at their zoo, so kids and adults who might never be able to afford a safari in their lifetimes can learn about and see these magnificent creatures. But his arrival doesn't mean we have to stop mourning for our beloved Harambe. RIP, indeed.