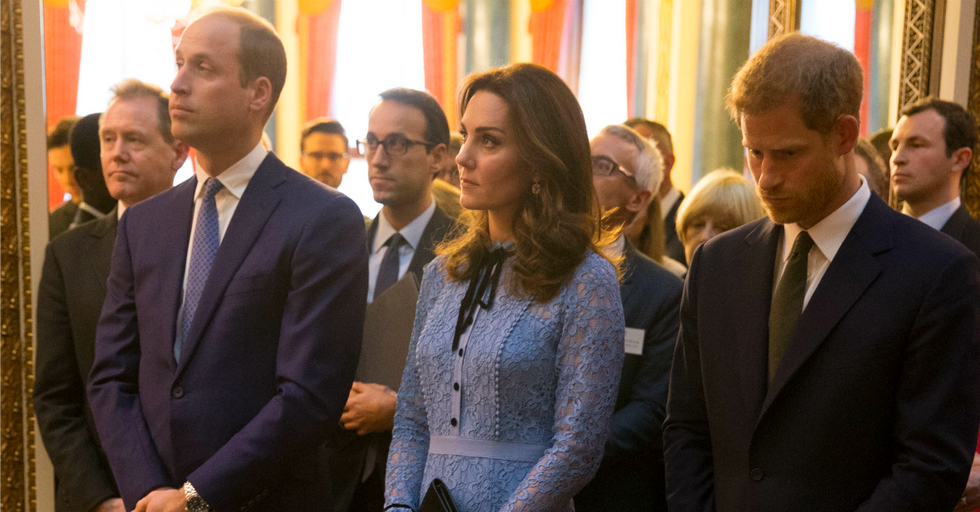 The Internet Is Pregnancy-Shaming Kate Middleton for This Unthinkable Reason

Kate, Duchess of Cambridge, and Prince William made their first public appearance last week after the royal couple announced they were having a third child. Despite having a condition which causes her to have severe morning sickness during pregnancy, Kate showed up to World Mental Health day anyway, like a champ.

Despite overcoming her pregnancy sickness to go to the event, the people of the Internet were quick to pick apart her appearance.

Folks, this is why we can't have nice things.

Kensington Palace announced the royal pregnancy on September 4th, but Kate hadn't made a public appearance until last week.

The royal press release announced the pregnancy and said that she could not attend an event due to a condition she has, Hyperemesis Gravidarum. The official release said, Their Royal Highnesses The Duke and Duchess of Cambridge are very pleased to announce that The Duchess of Cambridge is expecting their third child. The Queen and members of both families are delighted with the news. As with her previous two pregnancies, The Duchess is suffering from Hyperemesis Gravidarum. Her Royal Highness will no longer carry out her planned engagement at the Honrsey Road Children's Centre in London today. The Duchess is being cared for at Kensington Palace.

Most people wait until later in their pregnancy to make an announcement, but the Duchess announced hers early in order to explain why she couldn't make this event.

Hyperemesis Gravidarum occurs in just two percent of pregnancies. Women who have already had the condition or have relatives with the condition are more likely to experience it again.

Women with this condition often have to stay in a hospital for at least some time during their pregnancy.

A doctor told US Weekly that this condition causes persistent nausea and vomiting, which in turn can cause malnourishment and dehydration. Dr. Sherry Ross said about the condition, "Eating and drinking is a nightmare. The thought, smell, or sight of food can bring on nausea or vomiting. Women suffering from [the condition] can feel depleted, exhausted, and depressed."

Despite battling the condition, which can last throughout an entire pregnancy, Kate showed up to World Mental Health day last week.

The reception honored people that have worked in the mental health sector in the UK. The Kensington Palace Instagram Account posted pictures of Kate looking pensive and pleasant alongside Princes William and Harry.

Anyone who has battled the urge to throw up in public (conditions notwithstanding) knows that keeping a pleasant face while nauseated is no easy task.

Despite Kate's grit and easy demeanor, people started criticizing her for being too thin after Kensington Palace published the photos. You will not believe what they said.

People commented on the photos from the event, saying things like, "Is she pregnant?"

Other people commented, "I can't believe she's prego, she looks too thin," and another called her, "emaciated" and "severely malnourished," despite Kate's bravery in being open about her condition. The comments kept getting worse.

Instagram user lady99alta claimed that there is no such thing as morning sickness, and then said that Kate uses botox and has eating disorders.

She said," There is no such thing as morning sickness...When Catherine admits publicly she is anorexic and has severe eating disorders, only then I will take her mental health campaign seriously. She is more 30 lbs underweight and is well known for not eating and exercising for hours on end. It is physically impossible to be as emaciated and malnourished as she is and grow a healthy baby." Another Instagram user @meg_demarco commented, "I can't believe she's prego, she looks too thin." Isn't it about time we stopped shaming women for their weight?

Instagram user @christyfive commented, "People are horrible! I suffered from hyperemesis 5 times! I had big babies but did not show until really late. I pray for her this is a horrible thing she is going through!" Another person clapped back at the person who was saying that hyperemesis isn't a real condition. She said, "You have no idea what you're talking about. As someone who has suffered hyperemesis more than once I really feel for the poor woman. I wouldn't wish it on my worst enemy. Oh and I was perfectly healthy before falling pregnant... I'm sorry Kate you've had to go through hg again but it's nice to know that even princesses can suffer trying to bring a beautiful baby in the world. It takes pure determination to keep going when you feel beyong [sic] horrid day in day out. Ignore the hate. People often criticize what they don't understand."

Another loyal follower unleashed a roaring response to everyone who was criticizing the duchess for her appearance.

Thescdogmom said, "It is my sincere hope that EVERY SINGLE UNEDUCATED twit who is criticizing The Dutchess of Cambridge is stricken with intractable vomiting for a few days SO THEY CAN SEE what this precious young woman is experiencing and has been FOR MONTHS. It's quite hard to gain any weight when you are puking your toenails up all day... Mainly I want to say thank you, Kate, for caring enough to make Mental Health a priority and mustering the energy and strength to show support even going through a rough patch of several months. If you are one of the a** hats commenting on her size in a negative way shut the f*ck up and educate yourself."