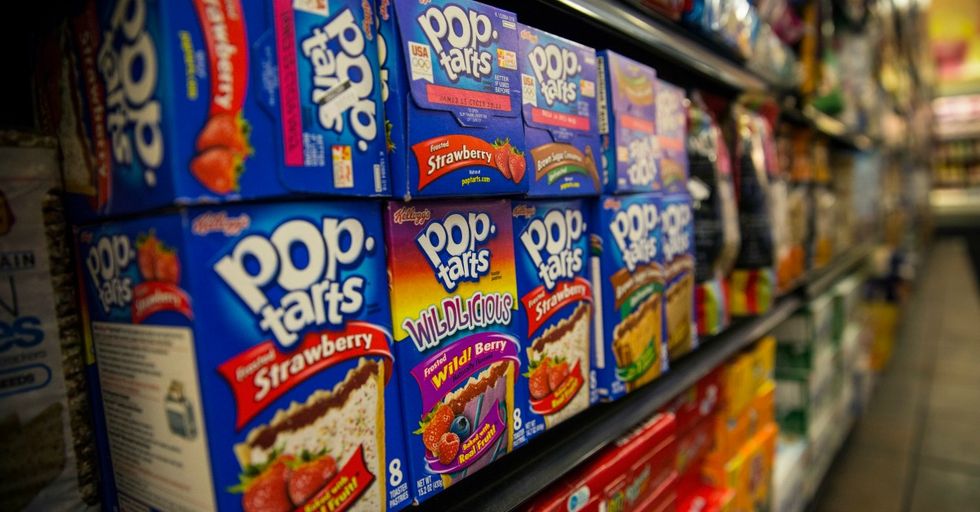 When a food crime is committed, the internet never hesitates to provide swift justice to the perpetrator.

So when a college sophomore posted a creation that would make even Homer Simpson gag, Twitter rightfully sprang into action.

People have been doing a lot of terrible things to food lately.

We blame whoever first decided that pineapple as a pizza topping was a good idea. That move opened the floodgates to all types of disgusting food combinations. Fruit on a pizza? It's a slap in the face to everything pizza stands for.

Take it from someone who knows what he's talking about.

Celebrity chef Gordon Ramsay has publicly condemned this topping, and obliterates any Twitter user who dares claim otherwise. He probably starts one of his signature screaming tirades at the mere sight of such a vile combo.

So we have pineapple pizza to thank for THIS sacrilege.

Yep, that's exactly what you think it is. Strawberries. On a pizza. Oh, the humanity!

People had pretty much the exact reaction you'd expect.

The responses ranged from disgust to anger to reporting the original poster for inappropriate content. @MoonEmojii, the user responsible for the image, even posted about being scared for their safety after people started calling the FBI — a clear sign that maybe we all needed to just calm down a little bit. It is just pizza after all.

But now, something new has emerged that will make you think twice about ever going on social media again.

A Twitter user posted a food combo so horrifying that it makes one wonder if all hope for humanity is forever lost. Ready to find out what it is?

Meet the perpetrator of the food crime: Chris Jorgensen.

If only he had duct-taped his hands, too, so that maybe the following act would never have been committed. On November 9, Jorgensen posted a photo of something most likely created in his dorm room at Iowa State University, where he's currently a sophomore. Drumroll please...

We present you with the newest culinary abomination:

A cheese and Pop-Tart sandwich. The rage you're feeling right now is completely understandable, so don't feel bad.

Everyone else online had the exact same reaction.

After Jorgensen thanked local supermarket chain Hy-Vee for providing the components of this unholy sandwich, user @Eriin_taylorr chimed in, demanding the store acknowledge the atrocity that it unwillingly had a hand in.

Many Iowans were pretty darn miffed by the post's statement that claimed "You ain’t from Iowa if you never had one of these."

Jorgensen was put under arrest for extreme repulsiveness. OK, probably not really, and you necessarily shouldn't report foods that gross you out to the campus cops, but still. (And: they obviously recognized that it was some kind of crime.) We get why so many people demanded Jorgensen see some type of consequence for his actions.

At the very least, he learned a few things from the experience.

All joking aside, many people seemed to feel personally attacked by the sandwich, and Jorgensen was probably blindsided by the wave of hate that Twitter unleashed. But let's all keep this story in mind the next time we think about doing something so crazy to perfectly innocent foods.