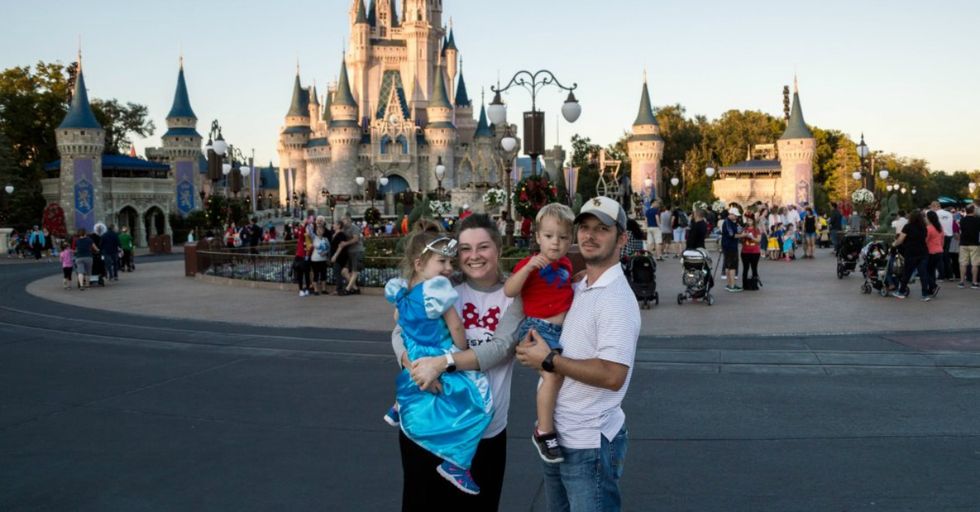 While most people are all about the modern take on the classic tale, there are also those who openly object to the idea, including Christian mom Brooke Poston, who blogs at The Fervent Mama (formerly This Modest Mom).

In fact, she objects to Disney's "LGBT agenda" so much that she cancelled the trip to Disney World that her, her husband, and her two young kids were planning to take.

“Disney isn’t just aiming their efforts towards parents of Disney-aged children anymore. They are pointing a desperate finger at the innocence of our youth," Poston wrote in a blog post.

Brooke noted that axing the trip last minute would cost her family $6,000, but that price wasn't enough for her to fall back on her values.

"Disney is targeting our youth like they’re aiming at big game on a corporate hunting trip," she declared. "They are no longer making watching a choice, but by forcing it to become mainstream, Disney is telling the conservative family, the Christian public, that they’re views hold no worth. In jest, they’re subtly encouraging you to conform your ways. (Mark 13:22)."

Brooke posited that if Disney continued the trend of featuring LGBT characters in their films, it would then spread to Disney theme parks - which Brooke does not support.

via: This Fervent Mama

"Mark my words, I won’t be ‘entertained’ by something that doesn’t align with my religious beliefs. Which definitely means I won’t pay for it," she wrote. "Next Disney will be talking about teen sex and abortions in efforts to normalize these issues to children as well- I guess you can pretty much tell that I’m pro-life and believe that sex isn’t appropriate outside of marriage. It really shouldn’t be surprising." Her post went insanely viral, with Facebook users on both sides of the debate weighing in with passionate responses in the comments section.

On Tuesday she wrote a follow-up post, noting that she’d received “nearly 350 Facebook comments, messages and emails" from those who disagreed with her stance on both Disney and the LGBTQ community as a whole.

"[LGBTQ] people are humans. I don’t think they are bad people," Brooke wrote. “I believe that all humans should be treated equally, and with respect. But I have a right to stay true to my religious beliefs as well."

However, a majority of people calling her actions completely hypocritical, to put it mildly.

Brooke, who said she also opposed the inclusion of queer characters on TV shows, added that she was left stunned after reading all the hateful messages in response to her Disney boycott. "I leaned to my husband tonight and said 'If I had known that it would be made out to this, I would have never posted.' Not that I am ashamed for my beliefs, but more that they’re being construed into something they’re not."

"It wasn’t my plan to stir strife," Brooke insisted in her post. "So if the context of my words were misleading and I made you feel condemned or less of a person, I’m truly sorry. Never in my adult life have I hated a person, and that doesn’t start today (or yesterday for that matter). No matter your preference of life, I believe in kindness, compassion, and brotherly love. I believe that everyone has a chance at happiness, but I also believe that happiness and fulfillment are found in Christ." She continued, "I cannot apologize for my Bible based convictions. It seems as though agreeing to disagree is a sign of weakness. Whether we agree or not in the end, we are all people, we all have opinions, no matter what those opinions be. Despite my beliefs, I never damned anyone to hell. Despite my convictions, I believe that ALL people should be loved. But that doesn’t mean that all ways should be accepted. Know that my words weren’t meant to be taken with an angry tone. I’m not angry with anyone." Brooke concluded, "I hope that you don’t continue to judge me based upon how you read my words." So, where do you come out on this?