The Internet Lost Its Mind Over Lizzo's VMA Performance | 22 Words 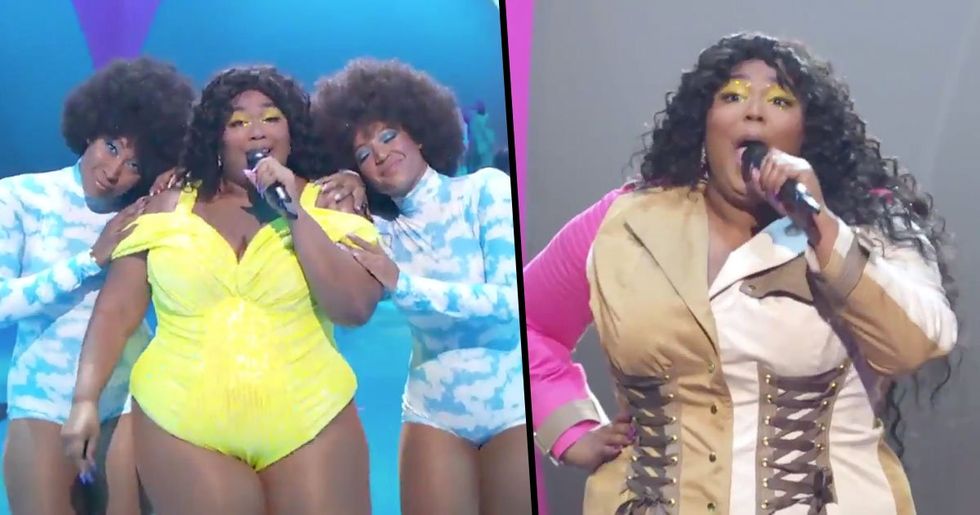 The Internet Lost Its Mind Over Lizzo's VMA Performance

During the course of the evening, we watched some of the industry's biggest names bag some pretty huge awards as well as performances from several celebs, including Taylor Swift, Camila Cabello, and, of course, Lizzo.

We all knew that Lizzo was going to blow the roof off the place with her performance. But she didn't disappoint one bit. Her performance included, not one, but two of her hit songs, a giant inflatable butt, a diamond-encrusted bottle of tequila, a stirring speech about self-love, assless chaps, and Queen Latifah. Feeling intrigued? Get scrolling.

In spite of not winning any awards, though, there's one star who absolutely dominated.

Singer, Lizzo, started her domination of the night on the red carpet, where she rocked this incredible red dress and feather boa combination.

Lizzo also took to the stage to perform a medley of her hits. And, as anyone who's witnessed Lizzo perform live before knew, we were in for an absolute treat.

And she absolutely did not disappoint.

Lizzo performed a medley of two of her most badass hits, "Truth Hurts," and "Good as Hell." Her vocal performance was flawless - but that's not the only reason that everyone is talking about her performance.

But Lizzo delivered the full package.

She always performs with a huge amount of energy and brings pure joy to the audience. On top of that, she took some extra time to talk directly to the audience, and it was totally beautiful.

And her gospel is one of self-love and confidence - a message of utmost importance in today's hyper-critical world. It almost seems as though she's starting a revolution.

She also made some truly inspired choices.

For example, the giant inflatable butt that she used to dress the stage. Watching it bobbing along in the background was oddly hypnotic.

One of her backup dancers was dressed up like much-missed pop hero, Prince, as certain eagle-eyed fans noticed.

Her stagewear was also incredible.

Lizzo started in a full-length trench coat, which she removed to reveal a bejeweled yellow leotard. Her backup dancers rocked what can only be described as assless leggings.

I imagine what seeing women like Missy and Lizzo being celebrated would have done for my teenage chubby girl self esteem.
— Yesika Salgado (@Yesika Salgado)1566887051.0

As she said on her Instagram: "Every woman on that stage had a story of either why they shouldn’t have been on that stage or why they didn’t believe they deserved to be on that stage, including myself. “Imposter syndrome" is a privilege to the most marginalized group in America. Not only were we taught to believe we didn’t belong in the spotlight, but when we finally get to a place to self-worth the world tries to knock us down. Not this time. The world smiled with us. The world sang us. The world saw our beauty last night. The world saw black women feeling Good As Hell and cheered us on. "

Overall, people are going wild for the performance.

And for Lizzo in general. Honestly, keep your eyes on her, because we think that she's set for mega-stardom. We can't wait to see her performance at next year's VMAs.

Because, aside from the incredible artistry ...

It genuinely seems as though Lizzo is doing something important for society as a whole. But while making us want to dance at the same time.

And it seems like we're not the only ones who think so.

Last night, we saw the entire crowd dancing and singing along to Lizzo's performance - with one particularly famous face really rocking out.

Along with yet another inspirational quote from our queen. Honestly, we don't think that we could love her anymore.

And Lizzo was really only the beginning.

The whole of the VMAs has given the internet a case of the warm and fuzzies. With Normani winning the first "Best R&B Video" award since 2006, and Missy Elliot becoming the first female rapper to receive the Vanguard Award, it seemed as if the ceremony was a celebration of black women.

And if you want to watch another iconic Lizzo performance which promises to boost your self-love, keep scrolling to watch her storm the BET awards.