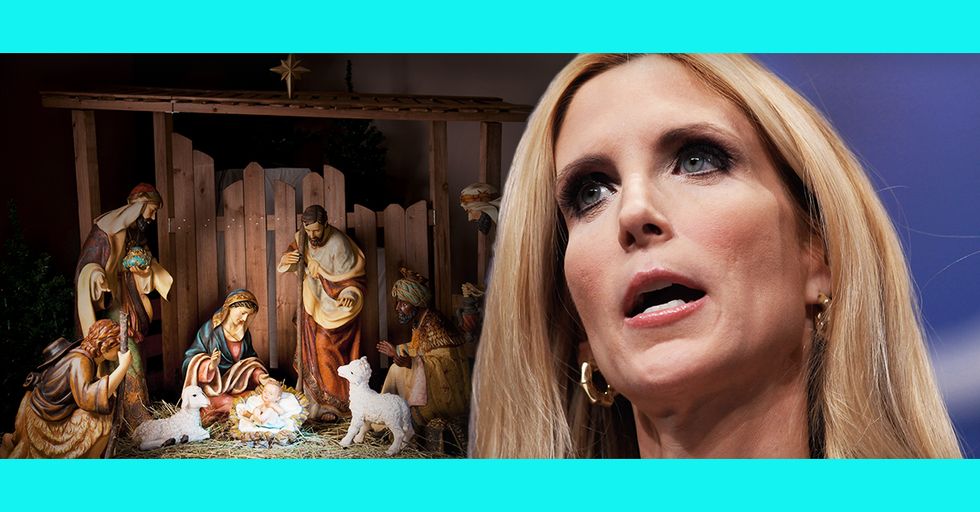 It's the holiday season, which means one thing – it's prime Nativity scene time.

The Nativity, or the birth of Jesus Christ, is as closely associated with Christmas as Christmas trees and tinsel. In fact, it's even more, because what is Christmas, if not a celebration of the Birth of Christ?

In fact, the very word "Christmas" comes from the phrase, Mass of Christ, and the first Christ Mass – or Christmas – was celebrated in 366 by the Roman Emperor Constantine, the first Christian Roman Emperor.
If the name Constantine rings a bell, it should, because he's the guy who consolidated the books of the Bible and helped settle some of the tenets of Christianity, as they were.

The first recorded date of Christmas being celebrated on December 25th was in 336 CE, during the reign of the Roman… https://t.co/QgJTd88OrT
— RetroNewsNow (@RetroNewsNow)1514222231.0

While Jesus certainly wasn't born on December 25, the date of his birth was placed there because there were two other Roman festivals already present at the time – "Saturnalia" and "Dies Natalis Solis Invicti," or the day of the unconquered sun.
In any event, Christmas soon became one of the biggest holidays in the world, and everyone knew the story behind it, which is described in the gospels of Luke and Matthew.
In the gospels, Mary became pregnant by the Holy Spirit, a fact which distressed her husband Joseph, who planned to divorce her.
Before he could do so, he was visited in a dream by an angel who told him Jesus was the child of God who would save people from their sins. Jesus was then born in Bethlehem under the reign of Herod the Great, a brilliant, but cruel king.
After the birth, three Wise Men came to Herod, saying they'd seen a star which told them the King of the Jews had been born. Crafty Herod told the Wise Men to go to Bethlehem, ostensibly to find the anointed child so he could worship him too. In reality, he intended to kill the child that would threaten his reign.
The Wise Men found the Holy Family and gave them gifts and spices, but did not return to Herod because an angel warned them of his cruelty. Joseph was also warned by an angel to flee with his family to Egypt, which he did.
After Herod died, the Holy family went to Nazareth in Galilee. Of course, by this time, Herod had long slaughtered all male children under the age of two in Bethlehem.
One of the most dramatic passages in this story is where the Holy family flees to Egypt to escape persecution. Another way of saying this is they take refugee in Egypt, and by doing so, become refugees.

In fact, the UN defines refugee as:

Someone who has been forced to flee his or her country because of persecution, war, or violence. A refugee has a well-founded fear of persecution for reasons of race, religion, nationality, political opinion or membership in a particular social group. Most likely, they cannot return home or are afraid to do so. War and ethnic, tribal and religious violence are leading causes of refugees fleeing their countries.

One person, however, didn't think so. Conservative personality Ann Coulter took to Twitter to clapback against what she thought was an exceedingly stupid error by a common Twitter pleb.

Mary and Joseph weren't refugees, you illiterate. They were going to Bethlehem TO REGISTER WITH THE GOVERNMENT. https://t.co/3kGMYvE3DD
— Ann Coulter (@Ann Coulter)1514265766.0

Of course, she was wrong, and Twitter was quick to let her have it.

Erm assuming the story is true, then yes, in #Bethlehem they were NOT refugees, but in #Egypt they very much were #refugees. They went there to avoid having their #baby killed by the authorities. Pretty much meets the definition. #Mary #Joseph #Jesus #Nativity #Christmas

One Twitter personality sought to help Coulter by pointing out that Egypt and Judea were the same country, but others were quick to point out this assertion also needed a deeper look.

Egypt and Judea were part of the same country.

'Country' is a term not best applied to the pre-modern world. Herod was the ruler (king?) of Judea and his influence and authority did not extend to Egypt. Roman systems were different to ours. The fact is Mary and Joseph sought REFUGE in Egypt ergo they were REFUGEES.

I'm an atheist and a socialist and probably everything you hate most, but I know my bible better than you. They fled to Egypt under fear of death. They were emphatically refugees from terror.

Actually, no. When the Holy Family flees to Egypt, they meet the current definition of refugees: those fleeing "conflict or persecution." And the word the angel uses in Joseph's dream in Matthew (2:13) is "φεῦγε" (pheuge), from which comes the word "refugee," the one who flees. https://t.co/BUBUqoaxxZ

When it was all said and done, one Twitterati had a final note:

But even if the Holy Family fleeing into Egypt did not meet the current definition of refugees (and they do), modern-day refugee families still deserve our care and protection, because each refugee possesses infinite dignity and worth. They are our sisters and brothers.

Let that be a lesson to you, Ann Coulter. Even plebs can read the Bible.