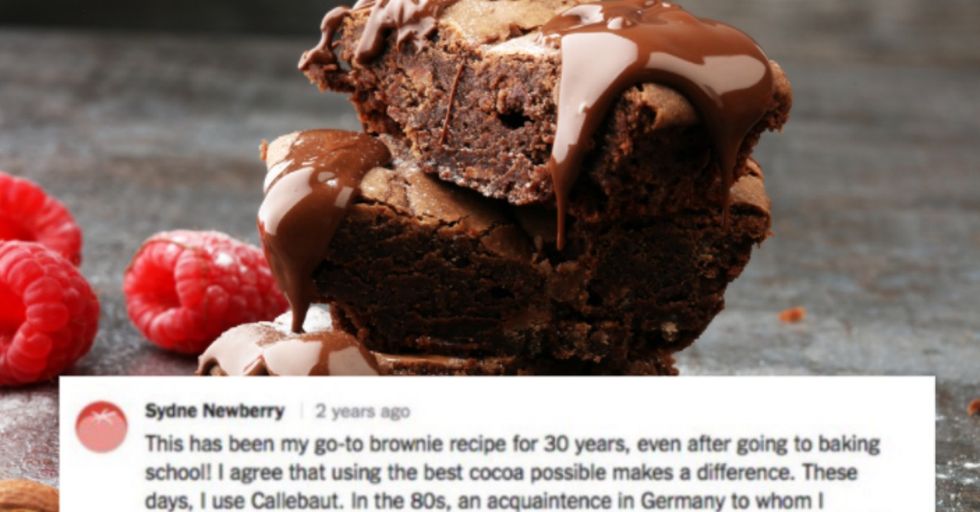 Two years ago, a woman named Sydney Newberry became famous, not for curing a disease or winning Olympic gold but for writing an Internet comment. On a brownie recipe.

It's glorious. And mysterious. A true classic.

The Cooking section of The New York Times is like the Wild West of the Internet.

You just never know what's going to happen there. Remember Peagate from 2015? The New York Times tweeted out a recipe for Green Pea Guacamole, launching a wave of Internet rage unlike any other that came before or since.

Even Barack Obama, the actual President of the United States at the time, weighed in and was like, "Nah."

Like many things, Obama was right about this too. Peas? In guacamole? No thanks. We like our guacamole sans tiny, chalky green explosions in our mouths.

Apples?! In guac?! A travesty. Honestly, what did guacamole ever do to you other than be a fresh, delightful dip for crispy, salty tortilla chips? #JusticeForGuac

Clearly, there are some fishy things happening on food verticals all over the digital space. But this next story, well, it's one for the history books.

Some time ago, The New York Times posted the recipe for Katharine Hepburn's Brownies.

The simple recipe for these fudgy delectables became an instant classic for its simplicity. Oh right, and also the bats**t insane comment left on the recipe by the one and only Sydney Newberry...

The comment is two years old, but it continues to surprise and delight readers today. Make sure you read the whole thing.

"This has been my go-to brownie recipe for 30 years, even after going to baking school! I agree that using the best cocoa possible makes a difference. These days, I use Callebaut. In the 80s, an acquaintence [sic] in Germany to whom I brought some of the brownies, and who considered herself a great cook, asked for the recipe but was never able to get it to work. She kept asking me what she was doing wrong and I was never able to solve her problem. Eventually, she moved to the US and stole my husband!"  We added the emphasis. Because... what?!

Didn't see that coming, did you?

Right up until the very end you were like, "Wow, what a nice, normal, not at all life-altering, dramatic comment about baking brownies. I'm not at all surprised by Sydney's anecdote. It seems perfectly OH MY GOD HOW WHAT TELL ME EVERYTHING I NEED TO KNOW." Yeah, we get it.

"She kept asking me what she was doing wrong," Newberry wrote of the woman who stole her brownies. We can venture a guess...

The moral of the story is fairly bleak.

Husbands aren't always swayed by the promise of a well-baked brownie. If only life were that simple.

Seems like this woman had an outsized reaction to not being able to perfect Katharine Hepburn's brownies.

But was it really revenge? After the comment went viral this time around, The Cut actually reached out to the comment's author herself, Sydney Newberry, for the real story. Here's what she had to say...

Apparently, the "acquaintance" from Newberry's story was "a gorgeous Italian woman who was very proud of her cooking and was a real food snob."

When Newberry brought her the brownies, this "acquaintance" asked for the recipe. Then, "they went back and forth in the mail trying to get it to work. When it didn’t take, 'she insinuated that I’d purposely left something out of the recipe.'" Three years later, the "acquaintance" visited and told Newberry that she and her husband had broken up.

“A couple weeks into the visit, I ran into a neighbor who lived behind the construction site, who asked me if it bothered me that my husband and the woman were fooling around!" Newberry said.

How insane is that?! Newberry didn't believe her neighbor until about a week later when she caught her husband and the "acquaintance" together. "I went to stay with a friend and gave my husband an ultimatum," she said. “He said he wanted to stay married to me, but then he immediately headed back to Germany for another ‘business’ trip! I took the opportunity of his absence to move out. A few months later, she was back but I never spoke another word to her."

Luckily, this story has a happy ending.

Newberry moved to Washington D.C. and remarried, this time to "the love of her life." But what does this new man think about the brownies? “Ironically, he didn’t taste the brownies for years, because he’d always been allergic to eggs. He finally discovered he’d outgrown the egg allergy when he decided to go to culinary school! He loves the brownies!"