The iPhone 11 Will Have Pet Portrait Mode, so You Can Take Even Better Pup Pics | 22 Words 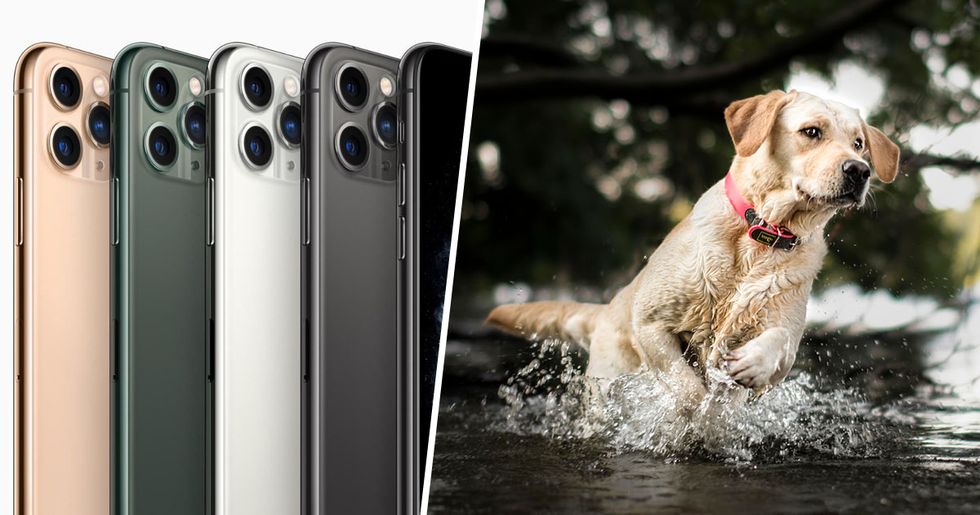 The iPhone 11 Will Have Pet Portrait Mode, so You Can Take Even Better Pup Pics

There's nothing quite as fulfilling as taking adorable pictures of your pets on your smartphone, right?

But it really isn't as easy as it seems to take that perfect snap of your angelic pet as it involves a ton of "sit down!" and "stay still!"

Well, it looks like Apple is here to save the day with their swanky new model of iPhone - the iPhone 11.

Not only does the new iPhone have an incredibly advanced set of cameras, but it has also claimed to be ideal for taking perfect portraits of pets. Keep scrolling to learn more...

Taking photos of pets isn't always the easiest of tasks...

As much as we love them, many pets aren't the best for sitting still and looking beautiful for the camera.

Because our pets deserve to look their best when they have their picture taken!

Advanced cameras are capable of taking a burst of multiple shots at once which can guarantee at least one decent picture when photographing a particularly mischievous pet.

Apple's iPhone is the biggest competitor. Take, for example, the iPhone XR that holds an optically stabilized, wide-angle, twelve-megapixel f/1.8 camera. In simpler terms, it's a pretty amazing camera.

But Apple has just announced a new upgrade...

The iPhone 11 will be available to pre-order from the 13th of September, and it looks pretty incredible.

It has been designed as a sequel to the iPhone XR so, as one can imagine, it holds various similarities to the previous model.

It has been designed to be much more resistant...

They are less likely to smash into smithereens when you accidentally drop your iPhone onto a hard concrete floor and Apple has promised a battery life that will last an hour longer than any other model.

In typical Apple fashion, the iPhone 11 is a work of art.

The phone comes in a variety of colors and features a glass rear and 6.1-inch Liquid Retina display. It's also being water-resistant - ideal for those clumsy folk who are prone to dropping their phones down the toilet! But what about the camera?

There's a huge focus on the camera...

There's a 12MP wide camera with a 26mm lens, and that's paired with a 12MP ultra-wide camera. That second snapper has 120-degree field of view. The iPhone 11 Pro Max features 3 camera shutters - which has been designed to improve brightness and reduce noise in images.

Selfies can now be super high-definition...

The selfie camera is a 12MP TrueDepth camera and has been designed to allow users to rotate the phone to take wider images. It is also the first time that Apple has included a 4K video recording on the selfie camera.

The multiple cameras featured on this model also offer a Night Mode, improved stabilization for videos, and a second-generation smart HDR for lighting, The Guardian reported.

One of the most "powerful and advanced" iPhones...

Tim Cook, Apple’s chief executive, said: “For those that want something that truly pushes the limits, this is the iPhone 11 Pro. The most powerful and advanced iPhones we’ve ever produced in a stunning new design."

It's no cheap deal, however...

The iPhone 11 starts at a buying price of $699, which is, in fact, a tad cheaper than what the iPhone XR was on release.

But are your pets worth it?

$699 is a lot of money, but just think of the beautiful photos that you could capture with the exclusive Pet Portrait setting...

The Pet Portrait Mode is designed specifically for non-human models...

Because, let's face it, us humans are better at staying still for a camera than our beloved pets are!

What makes the Pet Portrait Mode so different from the regular camera settings?

The camera has the technology to utilize the soft-focus background feature, allowing the camera to focus completely on our fidgety furry friends.

And getting the perfect photographs of our beloved companions is important to many pet owners, whether they want to share them on social media or simply keep as sentimental objects.

Many aren't convinced that this is an exclusive feature to the iPhone 11, however...

People have been taking to Twitter to show off impressive snaps of their furry companions, proving how Pet Portrait Mode is already a thing in older models of iPhone and other smartphones.

One user showed off the high-definition of her Pixel camera...

"My Pixel phone has Pet Portrait Mode too," she wrote, displaying an incredibly high-quality (and ever so cute) photograph of her pet cat.

With it being released in a mere 2 days, only time will tell if the Pet Portrait Mode is something to really show off about. To see some more adorable pet photos, keep scrolling to see the fantastic comparisons of pets before and after they get called a "good boy..."