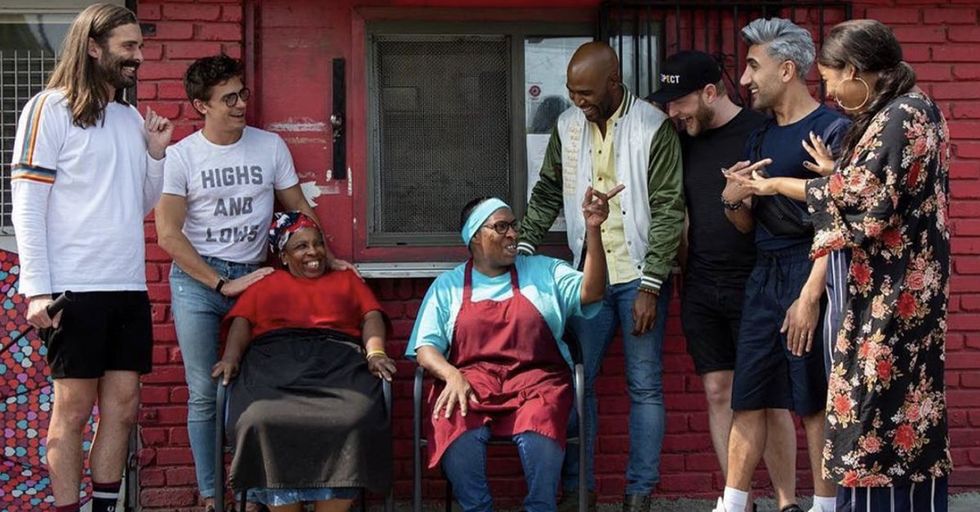 The Jones Sisters from 'Queer Eye' Sold Over $75,000-Worth Of BBQ Sauce This Weekend

When it comes to binging TV shows, Netflix has it down. It's no wonder the phrase is "Netflix and chill" - they pump out content like it's nothing. There's truly something for everyone. Whether you're into cozy baking shows, or classic sitcoms, or terrifying family dramas like The Haunting of Hill House, there's a good chance that you can find something on Netflix to binge.

Perhaps one of the most successful Netflix shows as of late is, of course, Queer Eye. A reboot of the original series, Queer Eye for the Straight Guy, which aired on Bravo in from 2003 to 2007, Netflix's version has a brand new Fab Five who we've all fallen in love with. Seriously, it's impossible to watch this show without weeping and feeling like you know every single person in each episode.

While the Fab Five - Antoni, Jonathan, Karamo, Bobby, and Tan - are obvious favorites, it's impossible to not become attached to those they're helping each episode (the "heroes"). The third season just dropped on Netflix, and the Jones sisters from one of the episodes are blowing up.

If you aren't aware, 'Queer Eye' is the best show ever.

When season one dropped on Netflix back in February 2018, we were all instantly hooked. And how could we not be?

The show is hosted by the Fab Five.

And goodness they are fabulous. Each member of the Fab Five brings a different, unique talent to the show.

Bobby is the unsung hero of Queer Eye. The man does so much work. He completely renovates the living spaces of each hero. The man is brilliant.

My favorite part of each episode is when the hero sees their home renovation.

Bobby deserves the world. He works so hard in each episode. Bobby forever!

Is there anyone funnier or sweeter than Jonathan? Jonathan is the grooming expert - he transforms each hero with a banging new haircut and teaches them how to care for their skin.

His "Jonathanisms" are hilarious and he always brightens the mood on the show. It's also really great to see him teach people how to take care of themselves. I stan Jonathan.

Besides being incredibly stunning (I mean...I can't look away), Tan is amazing at dressing people and helping them with their fashion sense. He's always willing to dish out some advice, too.

Words to live by.

It really is beautiful when the hero comes out of the dressing room and is stunned that a simple shirt and well-fitting jeans can boost their confidence. Tan works magic.

Antoni the Food and Wine Expert

Antoni is adorable and also very good at cutting avocados. Like, really good. And he's also good at eating lobster, as we found out in the first episode of season three.

He also...sometimes teaches them how to sort of cook?

Honestly? Who cares. He's the best and we love and support him. Besides, it's not like he can teach someone who to turn into a culinary genius in a single episode.

Karamo the Culture and Lifestyle Expert

Karamo usually helps people find their confidence and branch out to try things they'd normally shy away from.

Karamo's job is pretty much to make everyone feel great.

And he's awesome at doing it. I mean, I want to be sent a gift basket of muffins from Karamo! That would seriously make everything better.

The Fab Five are truly so special.

And each episode seems more poignant than the last. Remember how much we all cried at the Mama Tammye episode?

Her love and joy were infectious!

Seriously, do not watch this episode without a box of tissues nearby. You will regret it.

Season 3 dropped on Netflix on March 15.

And most of us have already watched every single episode. They're so addicting, can you blame any of us?

If you watched the new season, then you're familiar with the Jones sisters.

Deborah and Mary Jones (also known as Shorty and Little) are the first duo to be featured as heroes. The world fell in love with these BBQ queens.

And they're also super talented when it comes to food. They own Kansas City's Jones Barb-B-Q and are famous for their "special" barbecue sauce.

Everyone who watched this episode immediately wanted to try this sauce.

Are we all salivating? Well, here's the thing. If you found yourself wanting to buy a bottle of the Jones sisters' BBQ sauce, you most definitely weren't alone.

Since their episode aired, the Jones sisters sold over 11,000 bottles of sauce in one weekend.

Go, girls! The Jones' averaged selling 1.7 bottles a minute.  That is truly mind-boggling.

So how much money did they make in one weekend?

Is that not insane?

Not only are viewers clearly big fans of the sisters themselves, but everyone is dying to try this sauce.

The episode was also very emotional.

How does this show do it? They pull on all of our heartstrings.

Emotions and barbecue sauce - what more could anyone want in life?

That's the beauty of 'Queer Eye'

You become so invested in the lives of each hero. You really end up caring about them deeply.

We are all ugly weeping.

This tweet is very relatable. The Jones' sisters are everything.

It's amazing they sold 11,000 bottles of their sauce in a single weekend.

Everyone is going to hear the good news of this barbecue sauce.

You will smudge it all off with your tears. This is a fact.

The success of their episode begs the question of their business expanding.

It probably will - everyone is obsessed with Little and Shorty.

Something is for sure wrong with you if you don't sob during this episode.

If you can watch the Jones BBQ episode of @QueerEye without crying, see your cardiologist immediately. Something is wrong with your heart!
— Jonathan Merritt (@Jonathan Merritt)1552768533.0

Maybe you should go to a doctor and get your soul checked out, you robot. I kid, I kid. But seriously - episodes of Queer Eye need to come with an emotional warning.

Thank goodness for this new season.

Let's hope they never stop making episodes of this perfect show. Share this with your most Queer Eye-obsessed friend!