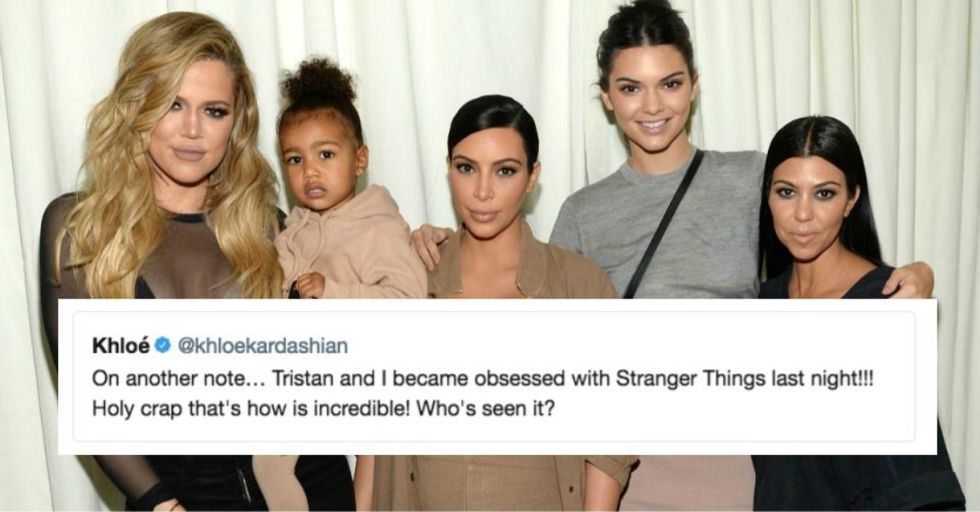 The Kardashians Just Revealed Their Obsession With This 'Stranger Things' Star

Millie Bobby Brown, the actress who plays Eleven on Netflix's Stranger Things, went on The Tonight Show with Jimmy Fallon Tuesday to promote the newest season of the Netflix Halloween favorite. When Kimmel asked the 13-year-old actress what her favorite thing was, she immediately cited Keeping Up With The Kardashians.

Turns out, the feeling is mutual!

On another note… Tristan and I became obsessed with Stranger Things last night!!! Holy crap that's how is incredible! Who's seen it?
— Khloé (@Khloé)1509541730.0

Khloe Kardashian had previously tweeted about her love for Stranger Things, so a helpful social media fairy sent her the clip.

Kardashian immediately took to Twitter to express her level of stan for Brown.

She gushed over Brown's stated fondness for KUTWK, saying "It's a mutual love fest!!" and adding an obligatory "Okurrrttt."

Soon, other members of the Kardashian clan jumped in.

Momager Kris Jenner hopped on her Twitter to express her love for Brown. "I love you milliebbrown, you are so adorable!" Jenner tweeted.

But she wasn't the only Kardashian to come on board.

Kim hopped in a with a quick "we love you," also making sure to add Brown's favorite Kardashian idiosyncrasy "bible." But that wasn't all...

Brown was on a plane when she saw the outpouring of love from the Kardashian clan.

She tweeted, Omg... I was on a plane and the stress watching the airplane mode not going off to tweet this!! Thank you and much love to all of u guys." We're so happy the Kardashians and Eleven found each other... Maybe now there'll be a KUWTK and Stranger Things crossover? Stranger things have happened. Wink.