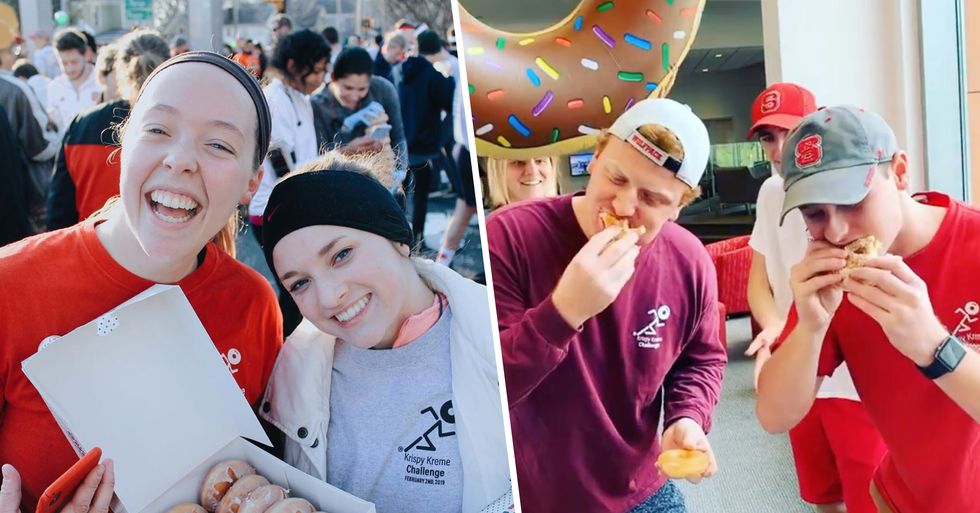 Krispy Kreme Doughnuts. Even just seeing those three words is enough to make my mouth water. Whether it's freshly made, straight off the conveyor belt, or boxed up in a stealthy twelve-pack, you can't deny the satisfaction of biting into a glazed ring sent directly from heaven. I mean, I don't even know what it is exactly.

Warning: it may be difficult to refrain from licking your screen, but I would advise against doing so.

At number 10, we have what many would consider to be a classic. A rich layer of caramel on an Original Glazed Doughnut. I dare you to name something better. Oh, wait, number 9 might just do it...

There are two things that I truly appreciate in this world: caramel and cheesecake. And Krispy Kreme knows what's up with the invention of this one.

At number 8, we have another classic. You can't go wrong with a raspberry filled doughnut, can you?

This one is filled with cake batter Kreme, topped with yellow icing and bright confetti sprinkle to give it that party look. Quick sidenote: the flavoring is artificial... so no need to worry about getting a tummy ache from an uncooked egg!

Another classic! This one tastes good no matter the occasion.

I ask you again, is there anything better than cheesecake in doughnut form? This one is filled with rich, creamy cheesecake filling, topped with cream cheese icing and sprinkled with crunchy graham.

Labeled perfectly, this delicious treat is brimming with chocolatey goodness - a perfect bite for those with an exceptionally sweet tooth.

A doughnut-y twist on a classic dessert. The Apple-Pie doughnut contains a cozy mix of cinnamon and apple.

Another pie doughnut. Krispy Kreme really seems to like pies, and so do I! So just missing out on the top spot is the Cherry Pie doughnut, oozing with a rich cherry filling.

The winning doughnut has to go to the Lotus doughnut. It's filled with a delicious mix of Lotus caramelized biscuit spread and Kreme. The combination of biscuit crumb and white chocolate shavings for the topping makes this the perfect Krispy Kreme doughnut.

It was difficult to narrow all of the great doughnuts available at Krispy Kreme down to just 10 but hey, we did it.

And now if you think you're going to go for a run to shake off all those calories...

Think again. Krispy Kreme has recently issued a challenge wherein individuals must run 5 miles and eat a dozen glazed Krispy Kreme doughnuts halfway through the race, all in under an hour.

“Running the five miles is the easy part. The hard part is eating all of the doughnuts. Almost everyone who fails the challenge does so because they couldn’t eat them all."

The rules are very strict...

If you don't finish the race or you can't eat every single one of the donuts, you don't technically qualify as a finisher.

It is a student-based race and started over a decade ago.

You'll never believe me, but it started off as a dare between N.C. State students. They agreed to run from the Memorial Bell Tower on campus to the Krispy Kreme 2.5 miles away, scoff a dozen glazed doughnuts, then run back.

The winner, Ben Gaddy, managed to do it in thirty-four minutes!

And the news spread far and wide. It was even picked up by the local news and obviously, there were lots of challengers prepping to beat the impressive time.

And the challenge has now become a popular bucket-list race for competitive runners and donut eaters.

5 thousand people signed up for it in 2020, though a lot of them didn't make it to the end.

And some of the profits go straight to charity.

The race proceeds go toward the UNC Children’s Hospital and the challenge has raised more than $1.7 million for the hospital, the director said. The rest of the entry fees ($25 for students and $30 for adults) go toward course setup and actually buying boxes and boxes of doughnuts.

She also mentioned this:

“There are a few ways to eat donuts successfully. The worst way is to eat them one by one. If you do that, it’s either going to take too much time or you’re going to get too full to eat them all."

So if you're up for the challenge, why not throw your name into the hat?