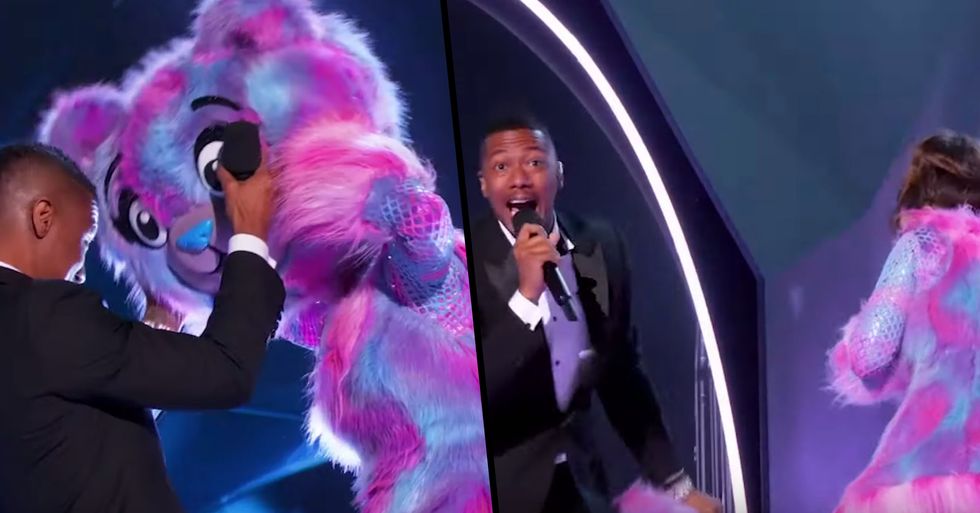 This year has seen the come back of The Masked Singer, and it has been everything we could have wished for.

We have already had our fair share of shocks during the series, but the most recent revelation is certainly the most shocking yet.

Keep scrolling to discover the true identity of Bear...

The Masked Singer Season 3 has graced our screens for over a month now.

The long-anticipated return of the hit singing show came in February and it's safe to say that it has so far lived up to its high expectations.

But, first, in case you've been living under a rock... here's a brief overview of what the show entails.

The show centers around a bunch of disguised celebrities dressed in over-the-top costumes who take to the stage to sing in front of a panel of judges (Ken Jeong, Nicole Scherzinger, Jenny McCarthy, and Robin Thicke), who try to guess who they are.

Every week, at least one masked singer is eliminated and subsequently unmasked...

As you'd expect, the last one standing is the overall winner of the competition.

Of course, those of us watching at home love to have a stab at guessing who the disguised celebs are.

It's all part of the fun!

And was revealed to be singer, T-Pain.

Overall, the show is a big hit.

Despite its slightly bizarre premise, the wacky costumes and element of mystery has clearly got thousands of us glued to our screens.

At the beginning of this season, the celebs were randomly paired up and pit against each other...

The premiere reunited judges Jenny McCarthy, Ken Jeong, Nicole Scherzinger, and Robin Thicke along with host Nick Cannon to deliver us a night of weirdness, glitzy karaoke (good and bad), and all-out extravagance.

But, shockingly, 2 celebs were unmasked in the first episode...

And, of course, they were subsequently eliminated.

And in an even more shocking twist, 2 of the judges actually guessed one of the unmasked celebs correctly...

If you've watched the first season, you'll know the panelists didn't really have a glowing reputation for guessing correctly, so this is a pretty big deal.

There have been some interesting characters on this season...

And it has been truly joyous to see each quirky character be revealed one by one.

Many famous faces have appeared on the season so far...

Of course, all of the revelations are shocking...

But the most recent is perhaps the most shocking revelation of all time?

And as the show goes, it was the end of the road for one of them.

The character "Bear" was ultimately voted out of the show...

Unfortunately, her first performance was also her last because the studio audience and judges’ vote named her rendition of Baby Got Back the night’s least liked performance.

This meant that it was time for Bear to ditch the furry pink costume...

And as the crowd was chanting, "Take it off!", Cannon helped Bear wriggle off her mask.

As the mask was pulled off to reveal the celeb, the audience were seen to gasp in shock...

And Robin Thicke's face says it all!

Nicole Scherzinger can be heard pondering as the backstage crew help Bear put her glasses on.

It turns out that Bear is Sarah Palin!

Palin is the former governor of Alaska and a Vice Presidential Candidate... so it's easy to say that she's a pretty big deal.

Cannon went on to ask her what the Bear signified...

"Well, the bear is part of my nickname growing up and the whole mama bear thing and they’re in Alaska," the fifty-six-year-old explained.

She then pointed out that she changed the lyrics of the Sir Mix-a-Lot hit to "exploit men."

"This is the weirdest thing I’ve ever done, that’s for sure," Palin said. "But it’s all about fun. It’s unity. This is all good. This is something that our country needs right now too."

Going by the reactions of fans...

It is clear that Sarah Palin was the person people least expected.

And it wasn't just the fact that Bear is a former governor...

Lol y’all Sarah Palin was revealed as the Bear rapping to Baby Got Back on the Masked Singer and literally not even… https://t.co/eCEX1opBkR
— Lauren Cross (@Lauren Cross)1583983627.0

It's the fact that she sang Baby Got Back. We have no more words...

You can watch Palin's unveiling here...

Make sure to keep scrolling for more amazing unveilings on The Masked Singer...