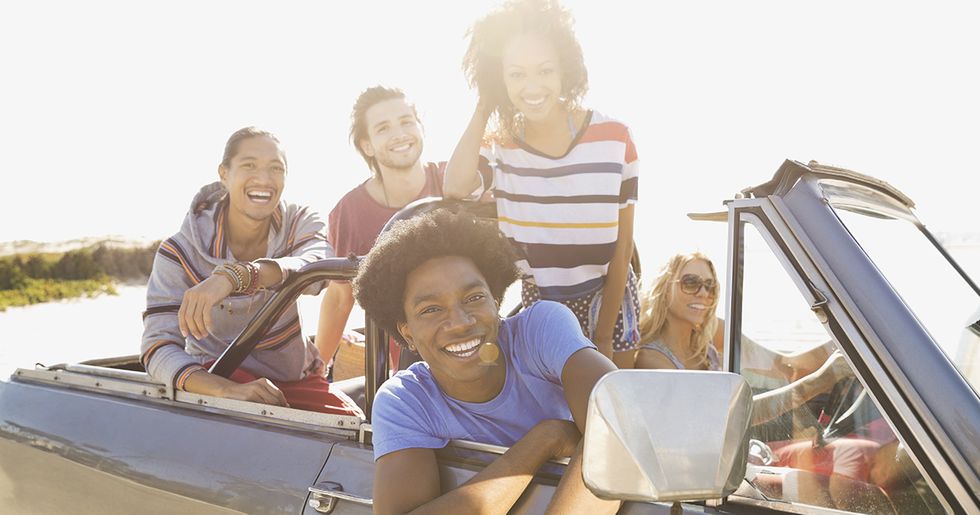 The Life-Altering Experiences Every Human Should Have at Least Once

There are some things everyone should experience. But the truth is, most of us haven't. It's not that we are boring, it's just that with so much to do every day sometimes we forget to do the things that really matter. I mean, who can think about traveling around Europe when you have 47 unread e-mails?

But there really are some things that make life worth living. Big things. Things that you don't really understand how important they are until you do them. Like eating a whole Chipotle burrito in one sitting (just kidding).

Here is a list of the things people think everyone should experience because it will change your life for the better. If you've already done some of them, good for you! If not, it's time to get on it. No matter how many e-mails you have in your inbox. Because "being at inbox zero" is not on this list? (Wait, but maybe it should be? That is a really good feeling.)

If you grew up in a city, you might not know that there's more to the night sky than just a couple of faint stars.

Go somewhere isolated enough at night that you can see the full skyscape, including the band of the Milky Way. -Clapperoth

What exactly are you seeing when you see The Milky Way in the night sky?

Even if you've seen the Milky Way before, you might not know what exactly you're looking at. The Milky Way appears in the night sky as a band of milky light. If you've never seen it in real life, you've probably at least seen it in really impressive Instagram photos. This band of light is actually our galaxy. A galaxy is a group of stars, dust, and planets bound together by gravity. Ours exists in a flat spiral, which means when you see that band of light in the night sky, what you're really looking at is all the dust and stars that are on the same plane as us in the Milky Way galaxy. Pretty cool.

It's so impressive, you might not think it's even real.

Until I was an adult (a few years into adulthood) I honestly thought that the pictures of the milky way from earth were basically photoshopped to show what it could look like.

I've still never seen it and I still can't imagine seeing more than a dozen or so stars at once. -Myam

It may be hard, but this is probably true.

You'd be surprised how many people constantly have their life "fixed" for them and never have to fail at anything. Failure allows us to learn coping skills, resilience, problem-solving, determination ... so many skills that many people today just don't have. -twogunrosie

Failure was one of the most liberating things I've experienced. When you fail completely, and realize how utterly and completely you failed. And yet the world is still beautiful, jokes are still funny, food is still amazing. And life's not that bad even when you're stuck in the gutter. There's nothing left to fear so you can truly release your inhibitions and just go for it. -OneCheeseyDancer

Stephen King's manuscript of Carrie was rejected 30 times before he threw it away and his wife submitted it to more publishers before it was eventually accepted. Oprah was fired from her first TV job. Even Colonel Sanders couldn't get anyone to invest in his chicken restaurant for years and he didn't even start trying until age 62!

If you've never been under the sea, you should try it.

Scuba diving. I promise you, it's a completely different world down there and it's not ours. You'll be amazed and maybe even get an understanding and a greater connection to our earth and all the living things on this chunk of rock floating through space. --Sparky

And if the thought of breathing from a tank very far under the ocean terrifies you, there are other options to see sea life.

Snorkeling is also great! Much easier for someone without means to get into, as well. -Batticon

This is another thing that you might not want to do, but it may still be a life-changing experience.

Being with a family member while they pass away. I know, I know....this sounds weird but I have experienced both and had so much more closure when I was able to be there when my grandmother passed away. -RhinestoneHousewife

It can bring you peace.

Sometimes there is a traumatizing experience that shouldn't be avoided. I hated seeing my grandfather slip away, but it was also part of both our lives that we shared together. In his last moments, he knew that I loved him.

Of course, if I could have never lost him I would prefer that, but it's part of every human beings exist, to live and die.

We shouldn't be afraid of being there when our presence can bring comfort to the other person in their last moments. -Pattonias

It's not for everyone, but I love travelling alone.

Traveling alone is one of the best ways to get to know yourself. Not being tied to anyone else's itinerary, doing only what you want to do when you want to do it can quickly teach you what your priorities are. -scrollingatwork

The first time I traveled alone I went on two historical walking tours in one day and there was nobody to complain.

It was pure freedom!

Actually letting someone get to know you can be hard, but it's worth it.

Complete vulnerability in the company of the person that you love. Letting that person really know you and taking the risky leap of putting yourself, with all of your insecurities, quirks, and naive hopes, in another person's hands. -juevos2go

Just not too soon.

You definitely don't want to be the person who told someone all about your irritable bowel syndrome on the first date.

Eating healthy food for like two months straight. You never realize how shitty you feel if you've been feeling that way literally your entire life.

Also helps you realize how insanely addictive sugar/fast food is. Once you go back to it the cravings kick in immediately (at least in my experience). -Hudre

Ok, pizza does seem good in the moment.

But imagine actually craving fresh fruits and veggies instead of fries and nachos. It can take some time, but eating healthy can make you feel better in the long run. (And you can always have a slice of pizza once and a while, it won't kill you.)

Same with drinking lots of water. You don’t realize how dehydrated you are on the reg if you aren’t used to being hydrated. Now when I’m sitting there feeling not quite right, it normally dawns on me that I haven’t been drinking water, and it cures it right up. -IndecisiveDog69

This one is fun.

A long road trip with friends. It's a bonding experience being in a little metal box with a group of friends for hours at a time trying to get somewhere together. You'll drive each other crazy, you'll make each other laugh, it's truly a wonderful experience. --eDgAR-

It's also a great way to get to know your partner.

I have done a couple long road trips with my wife and even went camping in the woods in the middle of nowhere for a week. It is one of the best experiences of my life, even if the drive was long and tedious. I want to do it again this summer! -K9Corgi

Or you could even try it by yourself.

I came here to say something similar but different: take a long road trip by yourself. I've driven across the US, Atlantic to Pacific, twice and each time was an amazing experience. Driving through corn fields during sun showers in Iowa (complete with rainbow!), nearly running out of gas in the pitch dark Nevada desert at night, seeing the heat rise over the seemingly infinite Utah salt flats, the wind gusts across the Wyoming plains, Rockies in Colorado, realizing that PA and OH are the same exact place, etc. Nothing short of spiritual and doing it solo gives a lot of time for reflection and spontaneous adventure. To be fair, the second trip I had my cats in the car but they aren't great conversationalists. -RUKnight31

Working in service changes your worldview.

Working in retail, major city emergency room, police, and fast food. It's always easy to assume we know better until we work there. -brownhammer45

*sigh* If this happens to you, congrats, I guess.

Ok, not to get all mushy but being in love is pretty great.

Surprised in all my scrolling to not see it, and maybe it's cliche, but I would say being in legitimate love with someone.

I've had it and lost it, and can easily say that I can live without the feeling, but now that it's gone, I have a strong desire to have that feeling back. -stumpybubba

And going through a breakup can be good for you, too.

Living on after losing love feels like true independence. A loss of innocence, of course, I'm a bit jaded, but I'm more competent, and confident, I know what I'm capable of. I've learned more about what to look for in a mate to feel really fulfilled. I can get it again. Maybe I'll even do better on the go around. -ActuallyYeah

If you've never had a pet, get one now.

The unconditional love of a pet. Having a true bond with an animal is so amazing. -Squirrel-ScoutCookie

Studies have shown having a pet can actually be good for your health.

Having a pet can lower your blood pressure and reduce stress. Plus they're so cute and good and perfect!

Everyone really could benefit from a therapy session of any sort. You never really know how much you could be struggling with until you have someone tell you to your face. -kamakoh4

Helping people will change the way you think about your own life.

Doesn't matter if it's for a food bank or an animal shelter or just for a charity event. Volunteering exposes you to a lot of people and responsibilities. And you come out better for it. -David_ish_

Traveling is worth saving up for.

Everyone should have the ability to travel outside their home country. It is mind-opening, in both positive and negative ways. You learn and you adjust, and you appreciate. I don't have a specific location, but travel can be both vacation and the exact opposite. And that's what makes it wonderful. Maybe we'll have fewer flat-earther believers, too! -ivythemajestic

Ok not joking, cheese can change your life.