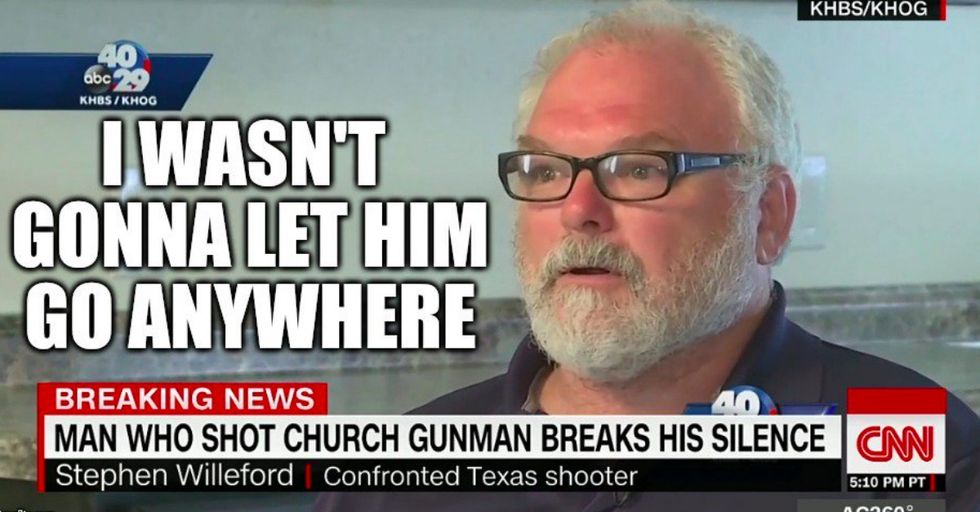 The nation was shocked this weekend when a gunman in black tactical gear shot his way through the First Baptist Church in Sutherland Springs, Texas. The gunman, later identified as 26-year-old Devin Patrick Kelley – a former airman who was discharged from the US Air Force for assaulting his wife and child – killed 26 and injured 20. Kelley later died of an apparent self-inflicted gunshot after exchanging gunfire with a good samaritan who then followed him on a high-speed chase through traffic.

His name is Stephen Willeford, a former instructor for the National Rifle Association (NRA), and he told his story to KHBS/KHOG television in Arkansas.

Willeford was in his home when his daughter heard what sounded like gunshots at the nearby First Baptist Church and rushed to him. He quickly got his rifle out of his safe. "I kept hearing the shots, one after another, very rapid shots — just 'pop pop pop pop'" Willeford said during the interview, looking visibly upset.

Willeford knew many of the members of the church so he didn't hesitate. He ran out without even stopping to put on his shoes.

Sutherland Springs is a very small community where many people know each other. "And I knew every one of those shots represented someone, that it was aimed at someone, that they weren't just random shots," Willeford said.

This didn't mean that he felt completely in control of the situation.

As the pair exchanged gunfire, Willeford was able to get in a couple of shots.

Stephen Willeford showed courage in the face of danger. He didn’t need an assault weapon to shoot the guy who had one.
— Geno Auriemma (@Geno Auriemma)1510060613.0

"I know I hit him," Willeford said. "He got into his vehicle, and he fired another couple rounds through his side window. When the window dropped, I fired another round at him again." Police reports would later confirm Willeford hit Kelley twice – once in the leg and once in the torso – although reports say the fatal wound was self-inflicted.

As Kelley drove away, Willeford flagged down a passing truck.

The driver, Johnnie Langendorff, was on his way to his girlfriend's house when he noticed the gunfight. “I never got a look at him [the gunman]," Langendorff explained to the Washington Post. “I never really saw him. I saw the gunfire." Langendorff said Willeford "briefed me quickly on what had just happened and said he had to get him." "So that’s what I did."

The pair chased Kelley through traffic, all the while alerting the authorities, who were just now getting to the church.

The high-speed chase reached 95 miles per hour until finally, Kelley's truck flipped and went into a ditch 11 miles from the church. Willeford told Langendorff to get down, then exited the truck and put his rifle on the roof, aimed at the gunman's car. He yelled, "get out of the truck, get out of the truck," but Kelley never did. Officials believe he had committed suicide.

Willeford is grateful to be alive after what he describes as a "surreal" and unnerving situation.

"I’m no hero. I am not," he said. “I think my God, my Lord, protected me and gave me the skills to do what needed to be done and I just wish I could’ve gotten there faster."