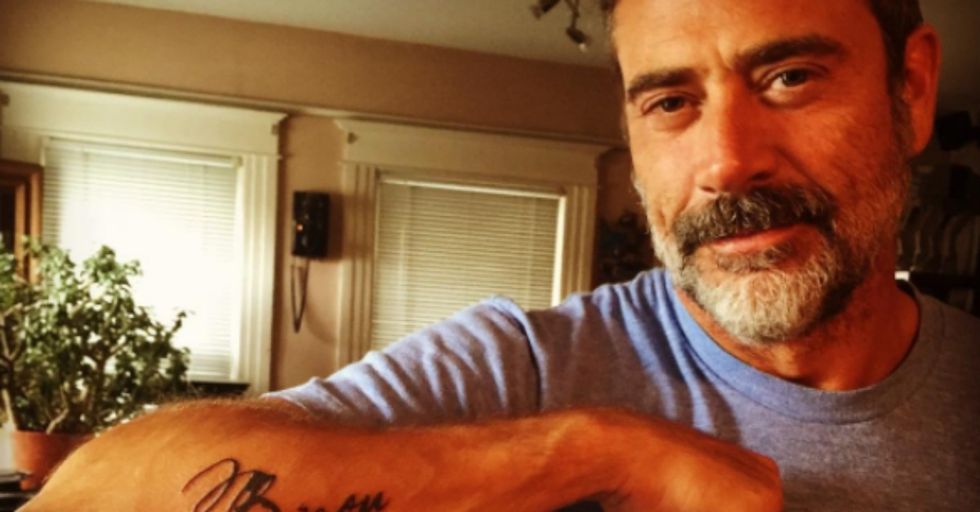 Most people know actor Jeffrey Dean Morgan from his roles in Grey’s Anatomy, The Good Wife, Extant, and The Walking Dead. But there's an even more important role that he's played, and he decided to honor that with a tattoo on his arm, the meaning of which he has recently revealed.

The tattoo simply says "Bisou," the name of a pup he saved over twelve years ago.

It's actually a really sweet story and paints a different picture of the actor you see knocking people off on The Walking Dead.

He found himself in Venice Beach, California, and met a couple of kids that were selling puppies in a box.

He asked the kids how much one puppy would cost, and they told him a hefty $300.

But then Morgan saw a very small puppy lying at the bottom of the box, the runt of the litter.

Since he only had $20 on him, he offered them the last of his cash for "the one that's not gonna make it through the day".

He took her to a vet, who seemed doubtful of the puppy's chances; she was so small that she fit in the palm of Morgan's hand.

Nevertheless, he took it upon himself to nurse the tiny pup back to health. "So I bottle fed her for a month, and she used to kiss her way around, which is how she got her name Bisou — it means 'kiss' in French," he said.

Miraculously, Bisou pulled through and grew up to become Morgan's faithful sidekick.

Sadly, Bisou passed away after twelve years together, but he'll always have a piece of her with him right there on his arm — and in his heart.