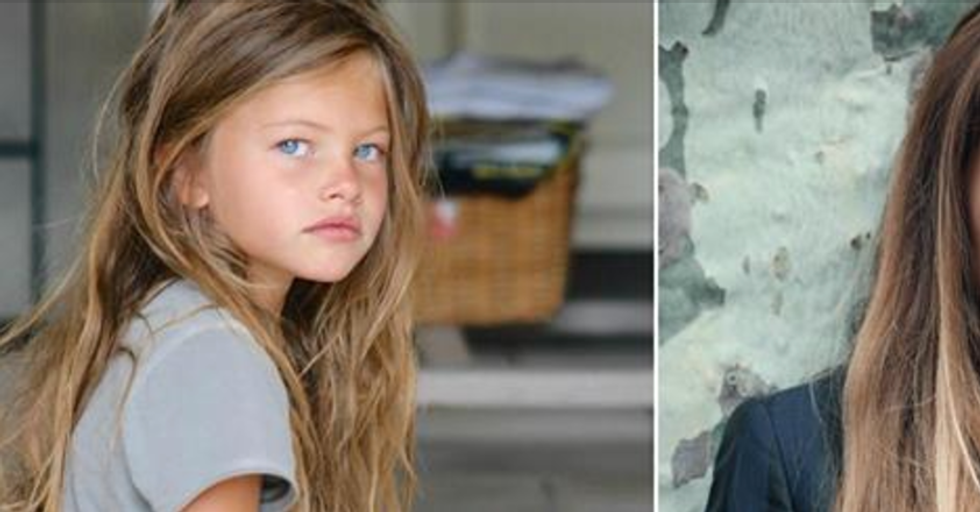 When Thylane Blondeau was given the title of "most beautiful girl in the world" she was still just a little girl.

Child models have always been controversial in the fashion world, but when Blondeau participated in a Vogue photo shoot six years ago, it raised more than your average amount of public concern about the use of child models and the effects modeling on a young persons' development.

As for Blondeau, here's how — and what — she's doing now.

She walked in the Jean Paul Gaultier fashion show as a runway model in 2005.

With her bright blue eyes and gorgeous looks, she was born ready for the camera.

But some people wonder if the world of modeling is really where a young girl should be.

In many countries models must be at least 17 years old to walk the catwalk. This is because modeling is considered too risqué for children.

Modeling can be incredibly tough work and is a lot of pressure for even adults.

Models must focus on the way they look over all else. Is that healthy for a young child?

No one made much of a fuss about Blondeau being a child model when she first began.

But when she was seen on the cover Vogue, people started to freak out. As a 10-year-old, the world felt she was being exploited when they saw a child posing in a highly sexualized fashion spread.

Psychologist Emma Grey spoke out, saying, “This picture is the antithesis of what childhood in our society should be; a child being exposed to a world she is not yet equipped to deal with solely to serve the needs of the adults around her."

Her mother claimed that she turned down most of the modeling offers she received, saying that her daughter lived a normal life.

But being only a child, Blondeau didn’t get a say in the debate that her modeling career had sparked.

She remained popular as she got older, gaining a steady following on Instagram.

At 14 years old, she was already repped by the highly sought after international modeling IMG Agency.

In an interview in 2015 with Teen Vogue, she said, “My favorite part of the job is meeting new photographers and makeup artists. I love to try on the clothes, too!"

Eventually, Blondeau began to branch out from modeling...

She also wanted to be a movie star! In 2015, she went on to star in the French film Belle & Sébastien: The Adventure Continues.

When asked what it was like to be a child model she was surprisingly nonchalant.

She responded about being a teen model and seemed to have no qualms with her past as a child model.

“Well, Kate Moss started modeling at the age of fifteen, and that was a little while ago," she said. "So, no. I’m not too young. If you have a good agency and people who take care of you… it’s perfect."

In response, Blondeau’s mother said, “I admit I myself was shocked during the photo shoot. But let me be precise: the only thing that shocked me is that the necklace she wore was worth €3 million!"

After Paris Fashion Week in 2016, W Magazine asked her what her plans were for the night.

The very level-headed Blondeau replied, “Going home to get some rest and going to school."

This year Blondeau will be 16 years old, and she seems to have a good head on her shoulders along with that pretty face.

Before long, the childhood controversy that once surrounded her may be totally overshadowed by other accomplishments.