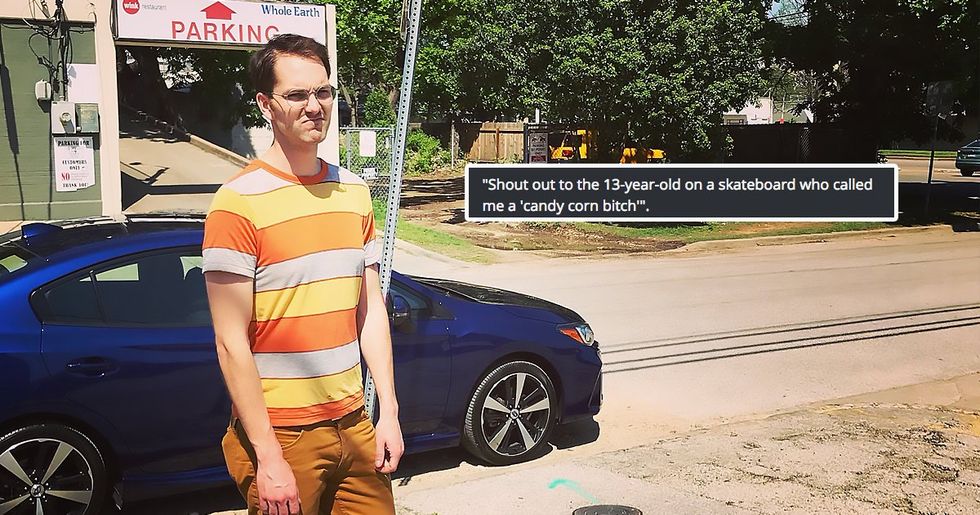 The Most Brutal and Totally Clever Comebacks of All Time

Get the burn cream ready, because you're definitely gonna need it after reading these comebacks.

There is nothing more frustrating than thinking of the perfect comeback when it's way too late to actually use it. I can't tell you how many times I've thought of the wittiest, most soul-crushing response to an argument...unfortunately, 100 percent of the time, I only think of them in the shower. And usually, it's a response to an argument that hasn't actually occurred in real life. In my imaginary shower arguments, I have a biting wit and a brain that can think under pressure. In the actual moment, however, I can rarely come up with something better than the ol' reliable chestnut: "I'm rubber and you're glue."

Everyone dreams of being able to summarily end a discussion with a scathing comeback. These people actually went out there and did it. They're kind of my heroes.

I have to assume that whoever made that sweater knew that this observation would be made at some point. How could they not?

It's not often that someone walks into their own trap like this. If you ever witness it yourself, I hope you're prepared.

The city is currently looking into how we can extract the salt from my haters & apply it to roads this winter. Will keep you guys posted.
— Norm Kelly (@Norm Kelly)1479941146.0

If you're not already following Canadian politician Norm Kelly on Twitter, you are truly missing out, my friend. This is my personal favorite of his tweets.

My roommate, who teaches 6th graders, has informed me that middle schoolers have started carrying around “reverse”… https://t.co/Jo5DtVMryf
— Lara Korte (@Lara Korte)1550545810.0

There are already so many versions of Uno, but I think it might be time for one more. I call it Uno Personal Attack.

And just like that, this little girl won the prank war. Nice knowing ya, Mr. Fart.

Pointing out something they don't like while failing to acknowledge this person won a freaking Olympic gold medal. Sums up the personality of that generation.

Looks like you may have to call 911 after all. Someone's gonna have to take you to the nearest burn unit.

I bet he's also going to say that he's falling in love with multiple people at once and that he wonders whether everyone is there for the right reasons. Aaaaand I bet the couple is going to break up after about a year.

Sure, some millennials truly don't want marriage and/or kids. But many do and simply can't afford it.

They say that everyone deserves love. I say there's an exception to every rule.

First of all, Paper Mario is a great game and how dare you? Secondly... You know what? Never mind. This person already took care of things.

This is truly a thing of beauty. You walked right into that one, Jimmy.

This comment would hurt coming from anyone. But from your own mother?! Ouch.

Brothers know exactly how to push your buttons. Not all brothers are quite as talented as this one, though.

Imagine being anyone and making fun of the struggles of someone in 4th grade. Come on, people. We're trying to build a society, here.

I love science. Both for the knowledge it gives us about our world, and for interactions exactly like this one.

Is it just me, or did it suddenly become a little chilly on the McDonald's Twitter feed? Maybe that will help the ice cream machine start working again.

This is a crime.

I see the macaroni. I see the cheese. But macaroni and cheese? There is none here.

Newsflash: Millennials care about their pets.

People actually care about the nutrition of their pets, and you're gonna complain about that being a problem? Come on, guys. You can do better than that. Right?

In what world would this argument possibly make even a little bit of sense? Like...the issue isn't spending money. It's what you're spending the money on.

I can't add anything to this amazing comment. It's already perfect.

Do you think the same company is responsible for both the candy corn shirt and the Neapolitan ice cream sweatshirt? I like to think so.

I like Charles Bukowski just fine, but I think we can all agree that this one comment in particular is totally whack. Context is everything, Charles.

Imagine seeing someone take a class to learn something new and then making fun of them for seeking out that knowledge.

If the laws of physics are so important to you, why are you seeking this movie out, Neil? Do you not have anything better to do? Isn't there something else you can ruin for everyone?

Oh, that is rich. Unlike people who work for free. They can't be rich.

What an impressive and manly man for being able to totally drag his child on Twitter about their hobbies!

I honestly had to take a second to recover from this one and it wasn't even directed toward me. That's how you know it's a good burn.

We usually allow three strikes, but in this case, we'll make an exception. Buddy, you're out.

And finally, my personal favorite:

And that, my friends, is how you do it. (Something Nick here has no experience with.) Share this with someone who could use a laugh today!