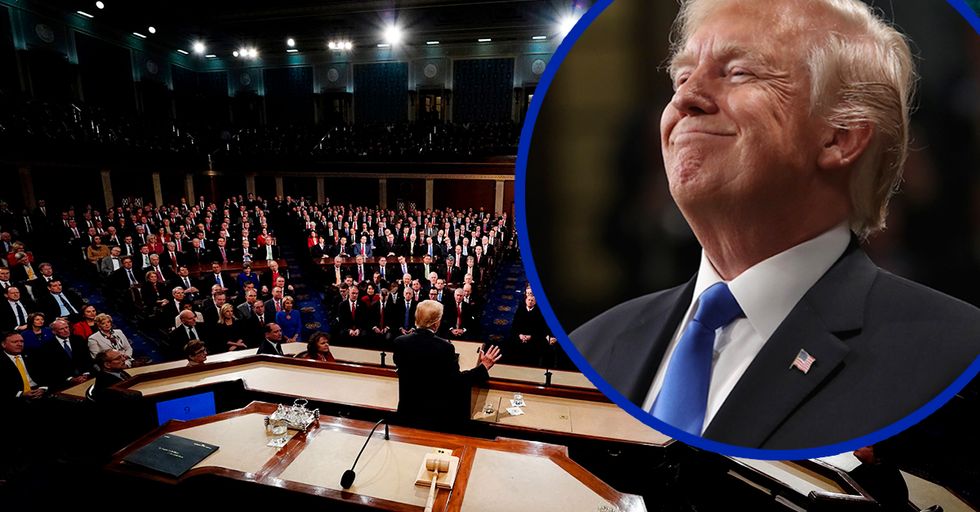 Donald Trump did his State of the Union address this Tuesday. It was, by all accounts, a very long and drawn-out affair filled with pomp, circumstance, and a whole lot of other unnecessary details. Democrats wore black in honor of the #MeToo Movement and scowled a lot. Republicans wore whatever the heck they wanted and smiled a lot.

In fact, Mitch McConnell smiled so hard, Daily Show host Trevor Noah quipped, "he looks like he just poisoned someone's drink, and they're about to sip it."

There was also all the clapping – and the lack of of it. Twitter latched on to the fact that Trump seemed to clap self importantly at every seemingly big point he made, and many of the Twitterati snidely wondered whether he wasn't congratulating himself much too soon.
There were also, of course, all the people that didn't clap, like the members of the Congressional Black Caucus, when Trump disingenuously claimed credit for the lowest rates of black unemployment in recent years.

And then, of course, there were all the subsequent think-pieces, blogs, and op-eds heralding the speech as a miracle of bipartisanship, and a new direction in the career of a very controversial president.
After all, Trump initially seemed to lean into the idea of bipartisanship. "Tonight, I call upon all of us to set aside our differences, to seek out common ground, and to summon the unity we need to deliver for the people... we were elected to serve," he said.
However, Noah was quick to rebut this as a massive act of dissembling "Working together sounds beautiful," Noah said, "but the truth is, almost every single time democrats and republicans have managed to agree on an idea, Trump has come back from the golf course just in time to screw it up... He did on immigration, Obamacare..."
Bipartisanship wasn't the only truth Trump took liberties with during his speech. He heralded the tax cuts in the new Republican bill as the "biggest in American history," which, of course, was a falsehood.
"These tax cuts were not in fact the biggest in American history," Noah said. "This is a lie, it's nowhere near it." The Washington Post concurs. "Trump’s tax cut is only the eighth-largest — and is even smaller than two of Barack Obama’s tax cuts," the magazine's fact-checking team wrote.
Also on Trump's agenda was his perennial favorite – immigration. Specifically, the visa lottery, which, he claimed is "a program that randomly hands out green cards without any regard for skill, merit or the safety of our people."
This, as the Washington Post explains, is false:

The diversity visa lottery program, more commonly known as the green card lottery, isn’t random as Trump suggests. Individuals apply for the visa, and must have at least a high school diploma or work in specific industries to be eligible for the program. As the term “lottery" implies, applicants are selected via a randomized computer drawing. The selected applicants undergo a background check, interview and medical tests before entering the country, and some applicants undergo an additional in-depth review if they are considered a security risk. Plus, selected applicants can be deemed ineligible for a number of reasons including adverse medical conditions, criminal behavior, and security or terrorism concerns.

Trump also made noises about chain migration – which, by the way, was how his family immigrated to the United States – as well as the African American unemployment figures, which were already well into decline due to President Obama, and have nothing to do with Trump. But, as Noah states, "This wasn't a night for facts... Tonight was all about celebrating President Trump."