Queen Elizabeth's wedding tiara is the most mysterious of all the royal tiaras. | 22 Words 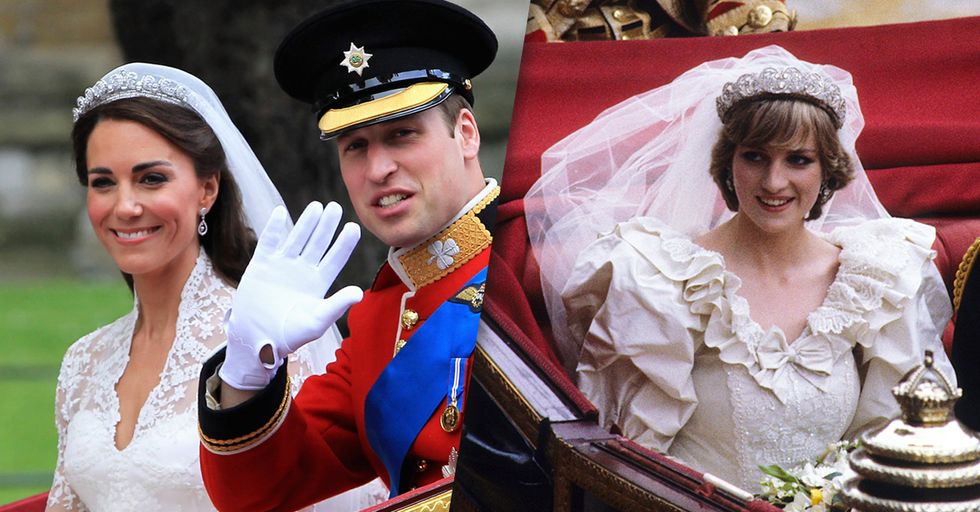 The 14 Most Gorgeous Royal Wedding Tiaras of All Time

At her wedding to Prince Harry, Meghan Markle surprised us all with her beautiful, sparkly tiara.

The Royals have a tradition of wearing diamond-encrusted tiaras passed down from generation to generation in their wedding ceremonies. (My family totally has that tradition, too.)

Here are some of the most beautiful tiaras royals have worn to get married over the years.

Meghan chose the Queen Mary Diamond Bandeau as her tiara for the royal wedding. This tiara belonged to Queen Mary, the Queen's grandmother. It features a detachable brooch that was made in 1893, but the tiara itself was made in 1932. It is made of platinum and diamonds.

Kate Middleton wore the Cartier Halo Tiara to her wedding in 2011.

The Duchess of Cambridge, Kate Middleton, wore this diamond and platinum tiara on loan from the Queen when she got married. The tiara was made in 1936 and was given to the Queen's mother as a gift from her husband King George VI. The Queen was given the tiara as an 18th birthday present in 1944.

Princess Diana opted for her own family's jewels.

For her wedding in 1981, Diana wore the Spencer Tiara, which belonged to her family and was made in the 1930s. She was often seen wearing the tiara again after the wedding, claiming it was more comfortable than other, heavier jewels.

Zara Tindall, William and Harry's first cousin, wore a geometric tiara that belonged to her other for her wedding.

Zara, is the daughter of Princess Anne. (Princess Anne is the Queen's only daughter, if you, like me, need a family tree pulled up while reading this article.) Zara married in 2011 and wore the Meander Tiara, a Greek-inspired tiara that belonged to her mother.

Autumn Phillips borrowed a tiara from her mother-in-law Anne for her wedding.

Autumn Phillips married into the royal family when she wed Princess Anne's son Phillip in 2008. She wore the Festoon Tiara, owned by Princess Anne. The tiara was given to Anne in 1973 as a gift for christening a ship by a Hong Kong shipping group. More sparkly tiaras on the next page! If you haven't seen what Margaret wore to her wedding, you will not be disappointed.

Sarah, Duchess of York, wore the York Diamond Tiara for her wedding to Andrew in 1986.

The tiara was given to Sarah as a present from the Queen.

Queen Elizabeth II wore the Queen Mary's Fringe Tiara to her wedding in 1947.

The tiara is made from diamond bars. The tiara actually snapped just before the 1947 royal wedding when it was placed on Elizabeth's head and it had to be hastily repaired. In some photos from the day, you can see that there is a gap in the middle of the tiara. Talk about a wedding mishap!

Princess Anne also wore this tiara on her wedding day.

Lady Helen Taylor wore the Kent Diamond and Pearl Fringe Tiara to her wedding in 1992.

Lady Helen Taylor is the daughter of Queen Elizabeth's first cousin. (Again, get out that family tree if you have it handy!) She wore this tiara topped with pearls to her wedding and even had her dress designed specifically to match it.

Princess Margaret wore the extravagant Poltimore Tiara to her wedding in 1960.

This tiara was not a family heirloom, Margaret purchased it for herself. The tiara was made in 1870 and can break apart into a necklace and earring set. After Margaret's death, the tiara was sold. My personal favorite tiara is on the next page! (It's so pretty).

Queen Elizabeth's wedding tiara is the most mysterious of all the royal tiaras.

Also, my personal favorite. The Strathmore Rose Tiara was chosen by the Queen's mother Queen Elizabeth as her wedding headpiece. It can be worn two ways: either across the forehead as was popular in the 1920s or on top of the head. The tiara hasn't been seen in years and nobody is quite sure why none of the royals have worn it. There are rumors that it was broken, but nobody knows for sure. With the across the forehead style of headpiece popular again for weddings, it would be great to see a younger royal rock this vintage piece.

This tiara was first owned by the Queen's mother Elizabeth and much like her wedding tiara, she would wear it across her forehead. Elizabeth passed this tiara down to Margaret, who lent it to Serena for her wedding. More recently, Kate Middleton has been spotted wearing this tiara.

The British royals aren't the only ones with tiaras, Queen Letizia of Spain wore a tiara to her wedding in 2004.

This tiara is from 1913 and first belonged to the Prussian royal family. It made its way to the Spanish royal family by way of marriage and is now frequently worn by Letizia.

Princess Claire of Luxembourg wore the Vines Leaves tiara to her wedding.

This beautiful tiara is from the early 1900s. Claire wore it to her wedding in Germany in 2013.

William and Harry's cousin Princess Eugenie is the next royal set to get married.

The next royal wedding is set for October. Which tiara do you think she will wear? Send this article to your most royal-obsessed friend so you can speculate together!