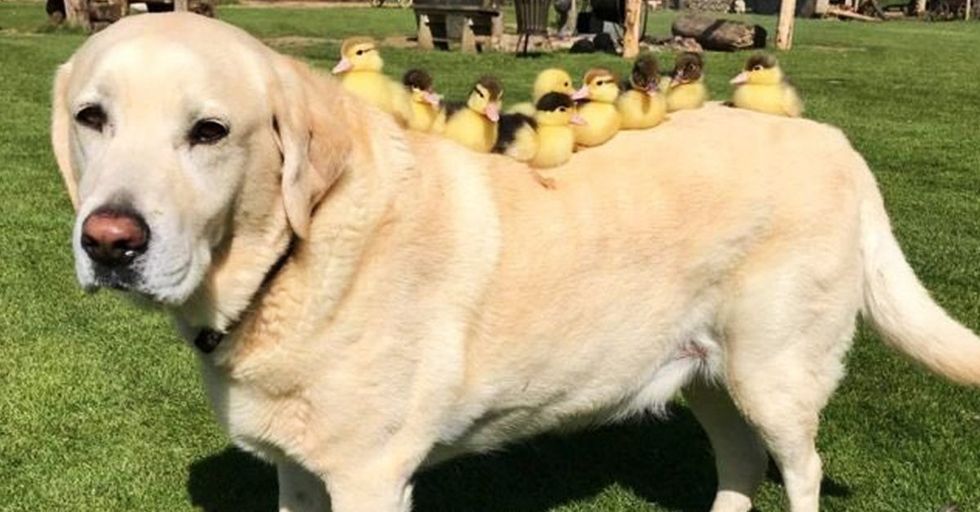 The Best Tweets About Dogs Ever Posted on the Internet

If you are a dog lover (and really, who isn't?), you need to know about @WeRateDogs. Maybe you already do, in which case, get ready for a list of the best @WeRateDogs posts you will ever see. If you don't know about @WeRateDogs, it is a Twitter account where anyone can submit pictures or videos of their furry family members for a chance for them to be rated. All dogs are at least 11/10, as far as I can tell, mainly because all dogs are better than great.

These posts are so cute that you might actually not be able to handle it. I know I can't. After I look at these photos, I have to take a nap and dream of pups because I can't stand to do anything else. So get ready for some of the best dog tweets of all times. Get ready to meet your canine heroes. These are the best @WeRateDogs posts ever.

I don't know if you're ready to handle this cuteness.

Seriously. I suggest holding the closest furry thing you've got while looking at these photos, whether it's a pet or a blanket or a person.

Look at this upside-down face! Charlie was so excited by the snow that he instantly fell asleep.

This is Fred. He lives in an English castle with his nine fluffy children. Says being a single father is sometimes… https://t.co/qW7XQ6rtuB
— WeRateDogs® (@WeRateDogs®)1526946583.0

Fred and his fluffy children! I am a sucker for unlikely animal friends, so this picture really got me.

Please don't send @WeRateDogs sandy sea slugs or any other non-dog animals. They only rate dogs.

OK, but I want a happy kitchen bear (which is really a Newfoundland, the greatest dog breed ever, and I'm not just saying that because I grew up with them).

Biggins the Elevated Corgo sounds like a series of children's books that I would very much like to read.

Honestly, if all ghosts looked like this, I would volunteer to get haunted all day every day.

Sure, his name is Ted, but he really looks like a Derp. Look at that face. It's a Derp face.

Um, how weird would it be if I printed out this picture and hung it over my bed? Not weird at all? Great, thanks.

This is downright absurd. Another picture without a dog in it? The disrespect is overwhelming. Please send dogs. Th… https://t.co/rgvSp5lV0F
— WeRateDogs® (@WeRateDogs®)1516815218.0

This Dalmatian might be a little hard to see at first, but he is there! And he's looking adorable!

We don’t rate snowflakes. We only rate dogs. This is a very straightforward system. Not sure how it hasn’t melted y… https://t.co/sQiFQbifDD
— WeRateDogs® (@WeRateDogs®)1545767210.0

Ugh, come on. This is like, so cute it's disgusting. I can't even look at it anymore because I love it so much.

If you are feeling sad, just watch this video of Winston falling on his face. It is guaranteed to make you feel better.

This is Beaumont. He wanted you to know he is a gift deserving of multiple present toppers. The joy he radiates can… https://t.co/rrDyR0DRpk
— WeRateDogs® (@WeRateDogs®)1545772031.0

Beaumont? More like Bowmont, am I right? I'll be here all week!

Finnick is finished. You can pick him up and carry him home, but if not, he's staying right there.

Um, have I mentioned that Newfies are the best dogs ever? Yeah, well, here's more proof.

OK, speaking of Newfies, this is Phoebe. Phoebe is extra special because — and this is no lie — she is my family's dog. She's perfect in every way, and that's why she was chosen to be featured on @WeRateDogs.

What is this dog/monkey/ragdoll?! She's magnificent and so so silly.

Franklin's like, "Welcome to my office. What can I do for ya? I can offer you a lick or a hug."

This is Mossy. She stole the remote and then fell asleep making everyone watch what she wanted. A very frustrating… https://t.co/v3t5rXgf8K
— WeRateDogs® (@WeRateDogs®)1525047034.0

Mossy looks just like my mom in front of the TV at any hour past 8 p.m.

This is Riley. Every morning he hangs over the wall and drops his toy so the nearest passerby is forced to play wit… https://t.co/xTidkHcf0c
— WeRateDogs® (@WeRateDogs®)1540224495.0

Riley is a genius! But also how does he get up there?! Does he have unusually long legs?

I don't think Arnold wanted to help with the lights. I think Arnold knew exactly how cute he'd look tangled up in them.

This is Sid. He got famous a few years ago for holding a piece of pizza. Wanted to let everyone know he’s still thr… https://t.co/GTjeGxYRVQ
— WeRateDogs® (@WeRateDogs®)1539188920.0

Sid! I know Sid! The picture on the left became a straight-up meme! It's good to know that Sid is still living that good pizza life.

This is Ziggy. He’s a rescue boy with megaesophagus, which means he has to sit pupright while eating. His special c… https://t.co/9zLxGFutMi
— WeRateDogs® (@WeRateDogs®)1542153544.0

Look at Ziggy in his perfect high chair. Oh my goodness, this is just about the cutest thing I've ever seen.

This is Dog Ross. He never makes mistakes, just happy accidents. Believes there’s nothing wrong with having a tree… https://t.co/cNs665rkhv
— WeRateDogs® (@WeRateDogs®)1541002886.0

Manny's face is literally too much to handle. Seriously, I had to take a lap around my apartment and come back because he's too much.

This is Leila. She demands to be carried everywhere. Way too distinguished to share the ground with mere muggles. 1… https://t.co/DIURiQFCAm
— WeRateDogs® (@WeRateDogs®)1535501930.0

Leila is an amazing dog, but she makes an even better hat. Also, she's a wizard!

This is the cutest tornado I have ever seen. I wouldn't mind getting caught in its eye.

Oh my god, hero dog stories make me so emotional. They'll do anything for their humans! Todd is perfect.

Do yourself a favor and take six minutes out of your busy life, turn off all other distractions, and watch this. It's so beautiful. Share this with a dog lover in your life!