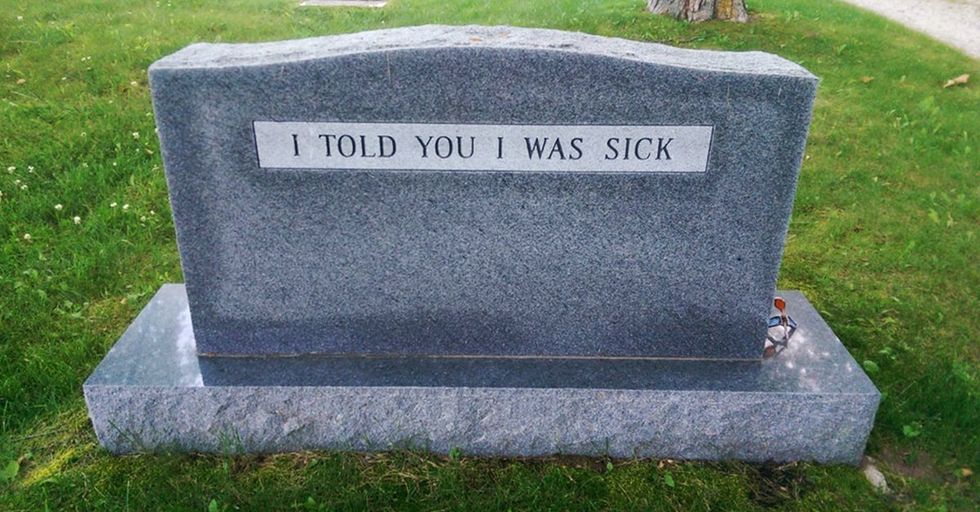 When you think about comedy, chances are the first thing that comes to mind is not death. But death, like taxes, is inevitable, so why not laugh about it when you get the chance? That is exactly what the people in this gallery did.

Before they kicked the bucket, they made sure that they would live on through these clever headstones which would entertain people for generations to come. Seriously, some of these are over a hundred years old.

What do you want your tombstone to read when you die? Personally, I was never into the idea of being buried under a slab of marble. But, now that I know you can have tons of fun with that slab of marble, it is seeming like a funnier option. Props to these people who used their last opportunity ever to put a smile on others' faces.

But thanks to the hilarious people in this gallery, some of them definitely are. Thanks to these deceased geniuses, we can laugh in a cemetery.

Oh man, this is the perfect thing to do with your headstones. Why not make them useful for people passing by?!

If you can read this:

I love this so much. Janet knew what she was doing when she ordered her headstone.

This is the ultimate "I told you so." It's perfect.

"I'd rather be reading this"

Esther isn't going to lie. She would much rather be standing there alive, reading the tombstone. But what are you doing to do?

Well, this person must have been quite dedicated to her phone to have a huge headstone replica of it.

This is amazing! That phrase is what people use to look at sample fonts because it contains every letter in the alphabet. It wasn't originally intended to be placed on a headstone.

This is an oddly political message to include on your tombstone, but then again, we live in trying times.

Dewey may have been "only a cat" but he clearly meant enough to his owners that they bought him a really nice tombstone.

In a final act of generosity, Kay took her fudge recipe to the grave. Well, to the outside of it, so you can enjoy Kay's fudge too. It sounds delicious.

I love this message because it's like half Terminator, half ghost warning. It looks like a very formal cemetery too, which is hilarious.

No place to go

This is amazing! She's all dressed up, but because she's an atheist, she doesn't believe that she's going to heaven...or anywhere else.

What a bright idea! The "world's greatest electrician" gave himself a giant lightbulb for a headstone. Awesome.

He's the iconic voice behind Bugs Bunny and all your favorite Looney Tunes characters. Makes sense that his tombstone would read, "That's all, folks!"

You've got to love a super sarcastic headstone message that totally calls out the product that led to her death. You go, Ellen!

Sure, this tombstone looks like a tree trunk, but it's actually made out of stone! So it's similar to one of those "green" burials but less...green.

He may have died, but he's not going to let anyone forget that one time, he caught a really big fish. It doesn't kind of make it seem like the fish killed him, though.

"Also his wives and children"

I guess that must have been a space and money saving measure, but man, William was busy during his lifetime. His family deserves some respect for putting up with him all those years.

"Keeper of the funk"

Everything else in this epitaph is sincere and heartfelt, but then there's "keeper of the funk." Ben's most important role.

Leslie Nielsen was a dramatic actor before he made his foray into comedy with movies like Airplane! and The Naked Gun and his tombstone, which contains this fart joke.

This is quite the headstone design. A smiley face that says, "Life sucks, then you die..." I mean, it's true...

This is crazy! "Here lies John Renie" that many ways! Apparently, he carved it himself too. He wanted to confuse the devil while he snuck into heaven.

Whoever buried Bernard was clearly not a fan. I put my money on a wife that he cheated on. What do you think?

This is a ready-made tombstone that you can order to commemorate you when you die. Unless you are Shrek, I don't know who would want this.

It may suck for the guy who died, but he has now created a lovely bench for people to sit on! That's something.

"You got him or you didn't"

Sounds like old Neil was a bit of a character and yet, misunderstood. I'm interested to learn what kind of person Neil really was.

Something you don't know

And that thing is what happens to you after you die. Unfortunately, even though this person has the answer, they can't tell us anything.

This guy was beaten to within an inch of his life at 80 years old, but that is not at all what killed him. Wow, he's tough.

I have no doubt that this is actually the person's last name, but it seems like just such an unfortunate hand to be dealt.

This is the creative yet very straightforward grave of a painter and printmaker named Patrick Caulfield. Share this with someone who's got a morbid sense of humor!