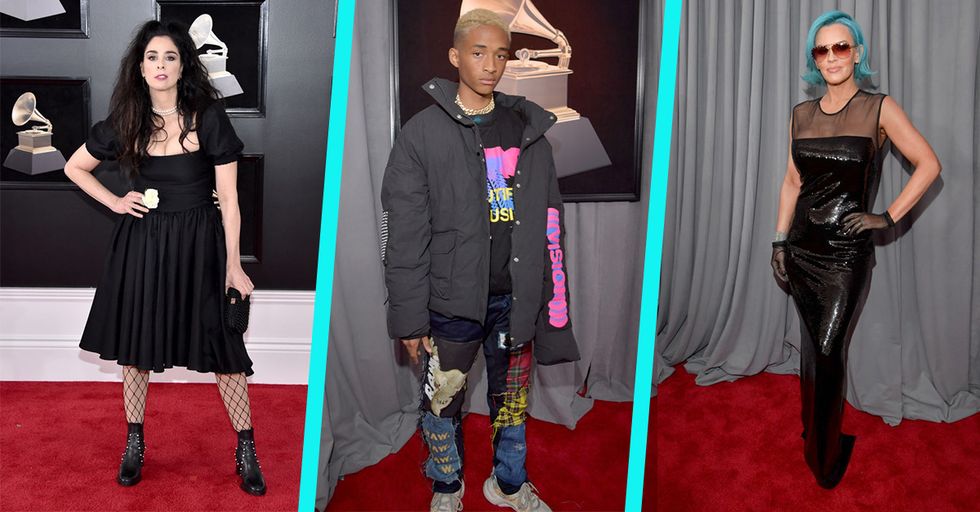 The Grammy Awards have always been bold and big. No shrinking violets on this carpet!

Let's take a look at the night's hottest looks.

Thomas Rhett is nominated for Best Country Album for his record, Life Changes.

Country crooner Maren Morris is nominated for her hit track "I Could Use a Love Song."

EDM duo, The Chainsmokers, are nominated for Best Pop Duo/Group Performance for their song "Something Just Like This."

Latin legend Luis Fonsi is nominated for his worldwide smash hit "Despacito" for Song of the Year, Record of the Year, and Best Pop Duo/Group Performance of the Year.

The man, the myth, the legend,  Sir Elton John, needs to introduction.

Sarah is working a rocker chic look on the carpet tonight. Do you think she's making it work?

Janelle Monae has been nominated for 6 Grammys but has yet to win!

I have no idea why Jenny McCarthy is at the Grammy's wearing a blue wig and leather gloves, but... she is.

Lana Del Rey (real name Lizzie Grant) is up for Best Pop Vocal Album for her record, Lust for Life.

Ne-Yo isn't nominated tonight but is absolutely killing it in this yellow velour ensemble.

Rick Ross isn't up for an award tonight but is looking seriously fly in this look.

Anna is absolutely slaying this menswear-inspired look. You go, girl.

Gary Clark Jr isn't nominated this year, but he won for Best Traditional R&B performance in 2014 for his song "Please Come Home."

Lil Uzi Vert is nominated for Best New Artist tonight, and when E!'s Giuliana Rancic asked him what he was most excited about after his potential win tonight, he replied, "eating a Pop Tart."

Cyndi Lauper has been nominated for 14 Grammys and won 2.

The adorable Bebe Rexha brought her mom as her date tonight who calls her "generous, loyal, and kind."

I'm not 100% sure what Jaden Smith's outfit is, but it is certainly unique.