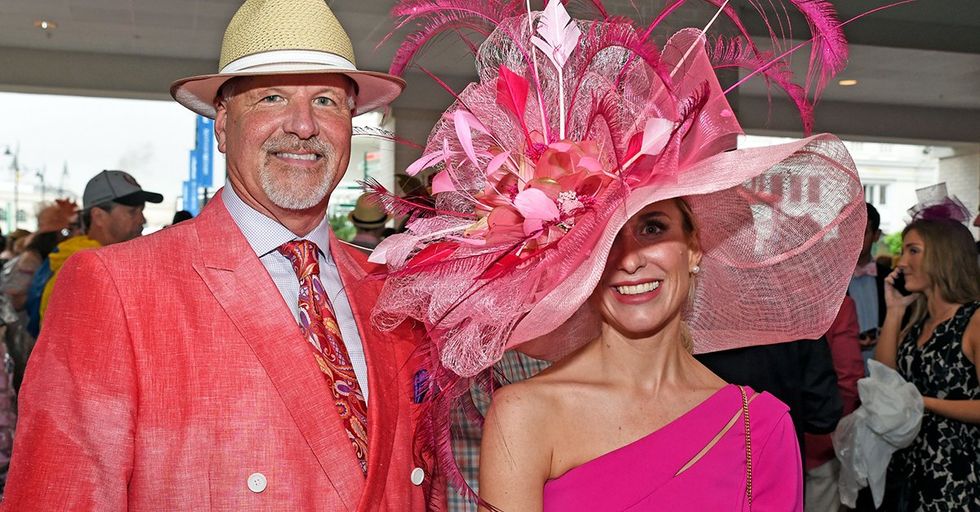 The 25 Most Outrageous Kentucky Derby Hats Over the Years

I envy the British lasses and southern belles that can throw on a fancy hat without so much as a second thought. Where I'm from, you pretty much can't get away with anything fancier than a baseball cap or beanie without feeling seriously overdressed (or more realistically, like you are just trying way too hard).

But there is one occasion where anyone can parade around in a fancy, fabulous, ridiculous or even hideous hat with their head held high; the Kentucky Derby is America's official hat haven.

In tribute to this sacred hat sanctuary, we present you with the 25 most outrageous Kentucky Derby hats over the years...

If you're going to go for it, go for it.

Sure, she could have made a statement with giant flowers or a ton of feathers, but no. This woman does not mess around. If she is going to wear an ugly ass hat, it's going to be a horse of a different color.

This guy brought down the house with this hat.

We want to know how many yards of tulle this woman went through while making this hat.

More importantly, how many bottles of wine did she go through while making it? One absurd hat; so many questions.

This level of passion deserves a poem...

Roses are red. Violets are blue. This guy looks crazy. Are those rose face tattoos?

What the heck am I looking at exactly? Please, anyone who knows what this is, let us know! What we do know is that someone invested a decent amount of time making it. We can't say the same for this next one though...

This lady was halfway through making her hat when she just said F*#% it.

At least that's our best guess. And, for some reason, we are envisioning a staplegun and several bottles of wine. There's really no other explanation.

Oh yes, a brim. Bummer that she was unable to finish making this hat. It could have been amazing. (We doubt it, but anything is possible).

This was supposed to be a hat inspired by the late and beloved Prince. Instead it ended up being a frisby inspired by a random sailor. Besides, how can it not be purple. I mean, come on, lady.

Here's a lifetime's worth. How many purple birds and plastic flowers had to die so that this woman could wear this hat?

Here's one way to not lose your drink at the party...

This guy is all about practicality and came to the Kentucky Derby ready to party, drink in hat. This next hat is not quite so practical...

We're betting this woman has a wild side.

But we have no idea what her spirit animal is. If we had to guess, our money is on tiger-bird-porcupine.

While there is A LOT going on here, we find ourselves at a loss for words.

We are going to go ahead and plead the fifth, or use a lifeline, or whatever it is we need to do immediately spare our eyes from this confusion and move forward with our lives.

Even she isn't sure about this hat.

Okay, this is not the ugliest hat we've ever seen but let's just say that if this hat we're a video game, it'd be 'Angry Birds.'

Now THIS is how you do feathers.

This magnificent bird of a hat is the essence of all that is peacock perfection and we are all about it.

I always loved daisies. Until now.

We hope someone explained to her that hats go on the top of your head and flower wreaths go on your front door.

This hat gets an A for creativity... but an F for realism.

This hat runneth over in originality, yet seems to ignore certain laws of logic... like gravity for starters. But considering the witchy-style brim, perhaps she's got a secret or two underneath this mess, I mean, hat.

It's a good thing this hat is giant and orange like a traffic cone... so people know to proceed with caution.

This white, simple, oversized hat could have been a classic. But instead, for some reason, it just feels like she's about to go to sleep underneath one of those fancy mosquito nets.

This hat is both fashionable and dangerous.

Who needs pepper spray when you can wear a hat like this? Somebody walking a little too closely behind you in the parking lot? No worries. Simply chuck your hat at them and maim them for life.

Is this the Kentucky Derby or a Rave in the mid 90's?

This hat is giving me flashbacks. We're pretty sure this woman just dug through her closet about ten yers back to her "Electric Wonderland" phase.

This woman clearly has a thing for butterflies.

But not just any butterflies... Giant, prehistoric, monochromatic ones that hang out on top of your head. This hat seriously makes me reconsider my fondness for butterflies.

Actress Sammi Barber was channeling her inner Miss Muffet for the Kentucky Derby.

Maybe she was craving some curds and whey when she picked out her hat. Never go hat shopping when you're hungry.

This man perfected the hat trifecta.

While we've been pretty hard on some of these hats, we still give credit when it's due.

If this anonymous hat-wearer doesn't know that this pic is out there, it'd be a crime. Women wait a lifetime to get a shot like this. While one might think that a red hat, red lipstick, and red sunglasses would be overkill, she totally pulls it off. Way to keep it classy, lady in red. Hats off to you for showing us how it's done. Cleary, there are a few hat-lovers out there who could use your help.

When in doubt, apply more feathers.

We've seen a lot of hats; some winners and some not so much. But at the Kentucky Derby, there are no hat fails. There are only feathers and flowers and more feathers. Share this with the hat-lover in your life!