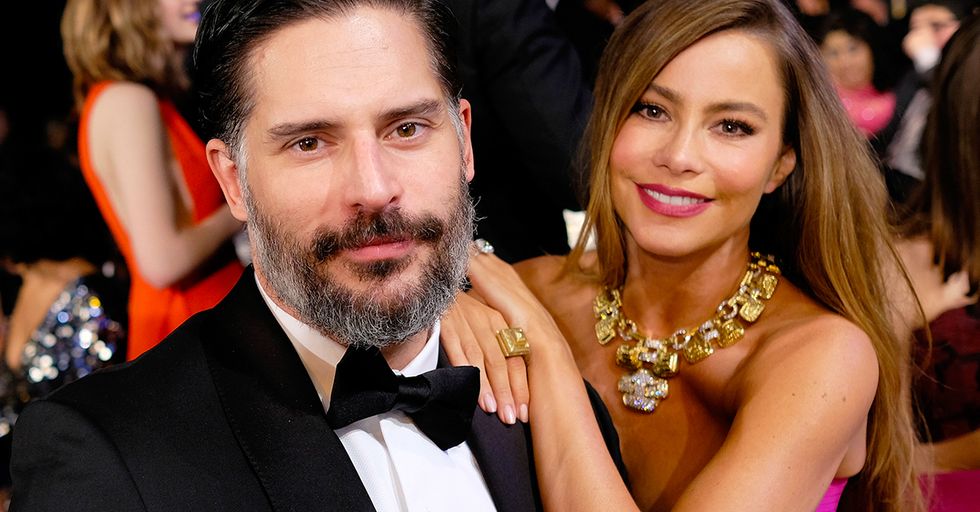 Celebrity proposals are a thing of beauty.

First, there's the specter of two hot, wealthy individuals possibly getting together for life.

Then there's the proposal itself, which usually involves flowers, diamonds, and displays of wealth and extravagance.

Here are 15 of the most over-the-top celebrity proposals ever.

When Joe Manganiello proposed to Sofia Vergara, he did so in her native Spanish. Vergara is from Columbia, and Mangianello, who'd had a crush on her since watching her on Modern Family, popped the question during a trip to the St. Regis Hotel in Princeville, Kauai. "Eres mi todo (you are my everything)," he told her. Vergara, unsurprisingly, said yes.

If you watch Dancing With the Stars, then you'll remember Maksim Chmerkovskiy's epic proposal to Peta Murgatroyd. During a performance of "Sway," he got down on his knees and asked her to be his wife.

When Nick Lachey proposed to his wife Vanessa, he did so in the most over-the-top way possible. They did a tasting menu at the Montage beach-side hotel in Laguna Beach with wine and champagne accompaniments galore, and then he surprised her with a ring!

Matthew McConaughey's proposal to his wife Camila Alves was a bit touch-and-go. He proposed to her during a big family Christmas and placed the ring eight boxes deep. When he asked the question, however, she paused, giving him a nice little panic attack before she finally said yes.

It took George Clooney only six months to pop the question to Amal Alamuddin, but the proposal was, in his words, "one of those horrible moments." As he explained to Ellen,

I plotted the whole thing out. I had the ring hidden behind her. I had music playing—my Aunt Rosemary's gonna sing "Why Shouldn't I?" Everything was planned out, and I've cooked dinner. And she comes in and she's just come back from London. And she's, you know she's—usually she'll dress up and now she's like maybe we'll just order in and I go, "No, no, no, I've made dinner." I've got it all set up, timed out, and the song is coming and she gets up to go wash the dishes, which she's never done. And I'm like, "What are you doing?" and she comes back in. And finally I said, you know, "I blew out the candle and I said I think the lighter's in the box behind you." And she reaches around and she pulls out the box and I've got just the ring sitting in there, and she pulls it out, and she looks at it, and she's like, "It's a ring," like as if somebody had left it there some other time.

That wasn't the end of the story, of course..
Clooney then explains.

And I got down on my knee and said, "I couldn't imagine spending the rest of my life without you." And she kept looking at the ring and she was looking at me and she was like, "Oh my God." And we now know because there was a playlist so we know how long it actually took, and it was like 25 minutes. Finally I literally said, "Look, I hope the answer's yes, but I need an answer 'cause I'm 52 and I could throw out my hip pretty soon." And she said "Oh, yes," and it worked out really well.

In 2007, Neil Patrick Harris proposed to longtime love David Burtka in the sweetest way possible. On their way back from an event, he asked the limo driver to stop on the very street they'd met and then he got down on his knees and popped the question.

There's no better day than Valentines Day to pop the question. When Taylor Kinney proposed to pop songstress Lady Gaga, it was not only Valentines Day, it was also snowing outside. He asked her to be his with a heart-shaped ring, and while the two are no longer together, this was one of the sweetest proposals ever.

You know you've thought a proposal through when you get the Plaza hotel involved. Todd Kapostas popped the question to his ice skating sweetie by having the Plaza Hotel put a picture he painted of him proposing in the window display because he knew she loved window displays. As she stared at it, he got down on one knee and asked the question.

When a royal proposes, you'd expect it to be over-the-top, trumpets and fanfare, correct? Not so the engagement of Prince Harry to future princess Meghan Markle. They were roasting a chicken together when he got on his knees and asked the question. So sweet, although we can guarantee you the wedding will be out of this world.

This has to be one of the sweetest proposals ever, mainly because Dwayne Wade got his sons Zion and Zaire involved. Wade planned what seemed like a normal day until the kids began a skit and took out a sign asking "Will you marry us?" Gabrielle Union thought they were just playing and she turned around to see Wade on his knees.

José Bastón took things to another level when he proposed to Eva Longoria in Dubai. He created a little oasis for them in the desert complete with carpets, pillows and lanterns among the sand dunes. Then he presented her with the ruby ring. Stunner.

Kanye West had been in love with Kim Kardashian for years, so when he proposed, he did it in the most memorable way. He took her to a ballpark where her family and friends were gathered and then had the words "Please marry me!" written on the scoreboard.

John Stamos' girlfriend, Caitlin McHugh, loves Disney, so when John was proposing, he knew exactly what to do. He had a short film of Disney's most romantic moments made and then he played them to McHugh at Disney right before he asked the question. This wasn't the most extravagant proposal, however.

Tom Brady certainly knows how to make a splash. When he proposed to his supermodel girlfriend, he did so on a private jet with white roses and champagne. Oh, and her parents were there too.

The High School Musical alum stopped then-girlfriend Sasha Clements in front of Cinderella's castle and presented her a glass slipper with a ring inside it. Unsurprisingly, she said yes.

Miles Teller gave girlfriend Keleigh Perry Whiplash when he proposed to her during a safari in South Africa. If that's not extravagant, we don't know what is.

Emmy Rossum explained to Vogue that “We have a tradition of reading the ‘Modern Love’ section of The New York Times every Sunday." Which meant that Sam Esmail, the creator of Mr. Robot, had a chance to be creative. Rossum explains.

[...] one weekend we didn’t read it — I don’t remember why exactly — and the following Friday he reminded me that we hadn’t. I was actually in kind of a bad mood that day, so I said, ‘Oh, well I’ll read it eventually.’ And he said, ‘No, no, no, I think you should read it.’ And I said, ‘I’m having a back spasm. I’m actually going to take a bath and have a glass of wine, but if you really want to hear it I’ll read it to you from the bathtub. So I got in the bathtub with the ‘Modern Love’ section as he’s posted up on the sink. I didn’t notice any kind of ring in his pocket, and I began to read the article, and the story is about a director who falls in love with an actress, and I started to think: Huh, that’s strange. And then I realized that it was our love story... And then by the time I finished the story he was down on a knee in the bathroom, with me in the tub.

Of course the legendary swimmer had to have a somewhat water-themed proposal. He surprised Reid with a helicopter tour of Los Angeles and then proposed to her at Sunset overlooking the ocean. Share this on Facebook with your most romantic friend!