The Most Photographed Places in Every State | 22 Words 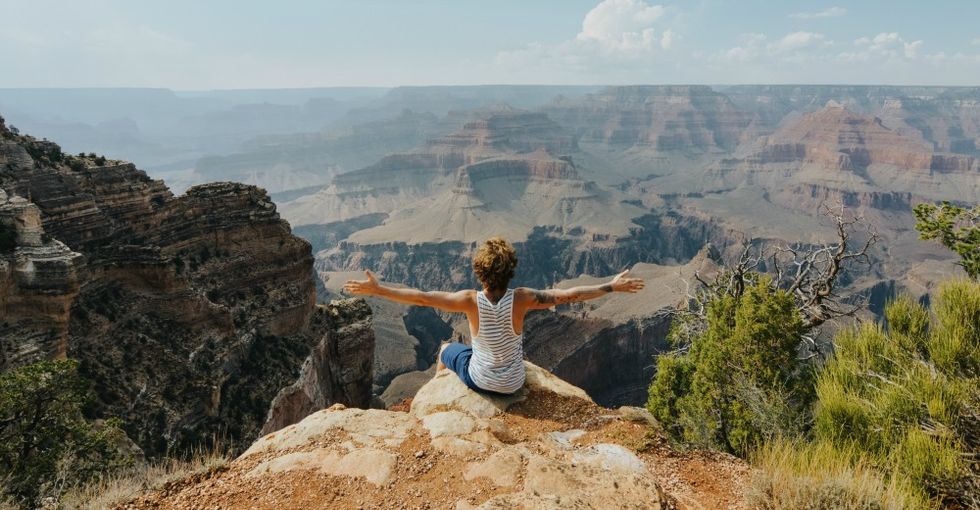 The Most Photographed Places in Every State

We're living in an age where, if you don't snap a pic to prove you did something amazing, you might as well not have done it at all. Isn't that basically the entire point of Facebook and Instagram? In fact, it's gotten to the point where Birthie Sticks exist, which is a selfie stick that expectant mothers in labor can strap to their legs in order to snap pics of the miracle of birth mid-push. (Okay, so this might be more of a gag gift, but it's definitely not that far fetched at this point. It would, however, make a perfect baby shower gift.) Here are the most photographed places in every state.

From Mount Rushmore to the Bellagio Casino to the Bonnaroo Music Festival, some of these popular selfie spots might surprise you. If you're looking to up your Instagram presence, you might want to bookmark this page right now.

This outdoor stadium is located on the campus of the University of Alabama in Tuscaloosa and is the home field of the Alabama Crimson Tide football team.

Home of the Grand Canyon, this national park is a hot spot for selfies taken in front of the red layered rocks. Several viewpoints located throughout the park give visitors a variety of breathtaking views to choose from.

This famous art museum is home to renowned American artists ranging from Norman Rockwell to Andy Warhol. It's also a popular destination for marriage proposals.

Who wouldn't want to snap a million pics at The Happiest Place On Earth? This popular theme park continues to expand, with a new Star Wars land opening in August of 2019.

This open-air amphitheater allows visitors to take in the natural beauty of the red rock structures of Morrison, Colorado while enjoying a show.

Just imagine all the great selfies you could take on this charming boardwalk, which is home to a variety of shops, family-friendly restaurants, and beachy backdrops.

Is there any place more magical than the Magic Kingdom in Walt Disney World? This park is the most popular within the resort and includes six different "lands" within it: Main Street U.S.A., Adventureland, Fantasyland, Frontierland, Liberty Square, and Tomorrowland.

With 10 million gallons of fresh and saltwater, hundreds of species, and thousands of animals, the Georgia Aquarium is a total tourism hotspot.

It's not hard to see why the Hilton Hawaiian Village Waikiki Beach Resort is the most photographed location in Hawaii. Everywhere you look is a tropical paradise and this 22-acre property is a must-see destination for families and Instagram influencers alike.

Even celebs like Julianne Hough flock to Lake Coeur d’Alene for swimming, water sports, and soaking up the sun. (And some cute boat selfies, obvs.)

Wrigley Field is a must-see destination and a Chicago landmark that has a huge presence on Instagram. Located on the North Side, this stadium is home to the Chicago Cubs and first opened in 1914.

The Lucas Oil Stadium replaced the RCA Dome in August of 2008, and is home to the  Indianapolis Colts. Football fans cheer on their favorite team in this 70,000-set multi-purpose stadium located in downtown Indianapolis.

Consistently voted the best state fair in the country, this midwestern tradition is filled with corn dogs, fried cheese curds, fresh-squeezed lemonade and, of course, plenty of fun photo-ops.

Grab an oversized hat and head to Churchill Downs next time you're in Kentucky, which is a southern tradition that includes horse racing, fancy clothing, and Mint Juleps. What's not to love?

Speaking of southern traditions, if you go to New Orleans and don't make a stop at Cafe Du Monde for some beignets, you're doing it wrong.

It's basically impossible to take a bad picture of Acadia National Park, which is 47,000-acres on the Atlantic coast located mostly on Mount Desert Island.

Known simply as Oriole Park by locals, this MLB ballpark is located in Baltimore and home of the  Baltimore Orioles. It has a capacity of 45,971 and was completed in  1992 to replace Memorial Stadium.

Most people have at least heard of Fenway Park, which is a famous stadium located in Boston and home to the Boston Redsocks. It was built in 1912 and is the oldest stadium in MLB.

Yet another state fair with nation-wide acclaim, the Minnesota State Fair offers visitors a giant slide, Pronto Pups, and pretty much any type of food you can imagine on a stick.

MSU is home to the Mississippi State Bulldogs, and the mascot, Bully, is a popular figure on social media. Check out that doghouse on wheels!

The next time you're in Missouri, be sure to make a trip to the Saint Louis Zoo. Not only is it one of the most popular zoos in the country, but it's also a prominent zoological destination for research and conservation.

Any photo taken at Glacier National Park looks like an instant postcard, which is located in Montana's Rocky Mountains. Visitors can enjoy breathtaking peaks, an assortment of wildlife, Hidden Valley, and over 700 miles of hiking trails.

If the above photo looks familiar, it's probably because this backdrop in the world-famous Bellagio resort lobby has been blowing up your Instagram feed for years now. The fountain out front is another popular spot for snapping pics.

Sure, you might not have any idea how to pronounce it, but once you see it for yourself, you'll understand what makes Lake Winnipesaukee, located in the Lakes Region of New Hampshire,  such a hotspot for photographs.

Located 8 miles west of New York City, MetLife Stadium has a capacity of 82,500 and is home to the New York Giants as well as the New York Jets.

This annual festival takes place in early October, lasts nine days, and features over 500 hot air balloons. As you can see, the photos are pretty spectacular.

Times Square in NYC is something that everyone needs to experience at least once in their lives. Sure, it's touristy, but it's also the most photographed spot in New York City for a reason.

Catch a live show at PNC Music Pavilion the next time you're in North Carolina. This outdoor amphitheater is located in Charlotte and is known as the "premier outdoor venue in the Metrolina region".

The University of North Dakota, or simply UND for short, is located in Grand Forks, North Dakota and home to the North Dakota Fighting Hawks football team.

Thrillseekers flock to Cedar Point, an amusement park in Sandusky, Ohio. The 364-acres include mind-blowing thrill rides as well as family-friendly entertainment.

If you like to rock, there's no better place to rock out than at the BOK Center in Tulsa, Oklahoma. The 19,199-seat arena features live performances as well as family-friendly festivals and sporting events.

Multnomah Falls is a picturesque waterfall located on Multnomah Creek in the Columbia River Gorge. It's 620-feet high and takes a stunning picture.

Even non-baseball fans can enjoy the beautiful PNC Park, which is a 38,362-seat stadium located in Pittsburgh, Pennsylvania. It's the home field of the Pittsburgh Pirates and is one of the most Instagram-worthy stadiums in the country.

This ivy-league school may be tough to get into, but you don't have to be a student at Brown University to score some seriously stunning pics.

Hilton Head Island has time and time again been voted America's Favorite Island, and it's not hard to see why. With 12 miles of sparkling beaches and a never-ending supply of shopping and dining options to enjoy, this South Carolina destination needs to be on your must-see list.

Not surprisingly, Mount Rushmore National Memorial is the most photographed spot in all of South Dakota. And, most of those photographs probably involve someone trying to pick Abe Lincoln's nose.

The Bonnaroo Music and Arts Festival goes from June 11th to June 14th and takes place on a 700-acre farm in Manchester, Tennessee. It features a diverse assortment of musical genres, ranging from indie rock to reggae to pop.

Any born-and-raised Texan has probably been to the AT&T Stadium to cheer on their Cowboys at least once, and having the photos to prove it.

With steep red cliffs and a flowing river, Zion National Park in southwestern Utah is the epitome of "picturesque".

Since it seems like there's a new brewery popping up every hour across the US, to be the most photographed spot in the entire state must mean that your beers are pretty darn good. Harpoon Brewery delivers both amazing brewskies and killer scenery.

Want to experience your favorite band in the great outdoors beneath a blanket of stars? Jiffy Lube Live is the venue for you. The pictures truly don't do this massive amphitheater justice.

Where else but Pike Place Market can you see grown men throwing giant fish around? Plus, there's an awesome variety of ridiculously fresh seafood and locally made goods.

The White House, located at 1600 Pennsylvania Avenue, is the official residence of the First Family. Every day, thousands of tourists snap pics in front of the famous home and try to get a glimpse of the Commander in Chief.

Despite what the name might suggest, there's a lot more to do on Snowshoe Mountain besides just snowshoeing. In fact, it's a hotspot for skiing, mountain biking, and a variety of other outdoor activities.

Located in Milwaukee, Wisconsin, Miller Park stadium is home to the Milwaukee Brewers and was completed in 2001 as a replacement for Milwaukee County Stadium. Oh, and if you don't plan on taking a beer selfie at Miller Park, you should probably just stay home.

Does it get any more iconic than Yellowstone National Park? If you're making a list of must-see destinations across the great US of A, it should be at the top. Jaw-dropping canyons, dense forests, a volcanic hot spot...Yellowstone has it all!