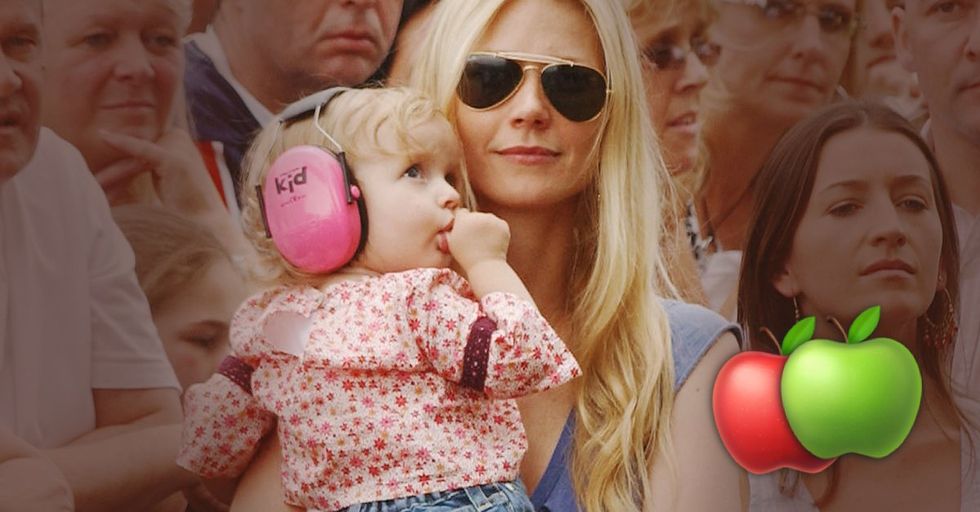 Ridiculous baby names are nothing new.

Sure, they get more ludicrous with each passing year. But it wasn't until the dawning of the of the age of the hipster that historically respected lines were crossed, and societal rules that are not meant to be broken were tossed into the compost like yesterday's avocado chia toast.

Suddenly, it seems as though our generation's parents are intentionally choosing awful baby names.

Look, we get it. You're cutting edge. You don't care about silly things like mowing your lawn or established social norms. You don't have a care in the world.

Except, it sort of seems like you actually care a lot. And while we are all for that whole "to each his own ridiculous baby name" thing, we're kind of over having to hear them spoken aloud.

If you're pregnant or are considering having children at any point in the future, do our generation a great service and don't name your precious baby one of these crap names.

Spare your children, family, friends, strangers, pets, ancestors and all future generations of your impudence and just go with "John" or "Sarah." It's really not that complicated.

Here are 25 ridiculous baby names that our generation will never forgive hipster parents for... And their kids probably won't either.

Newsflash: Your child is an actual human, not a lame style of hat. Although, the baby name and hat do have in one thing common; they're both ridiculous. And unless your child is going to grow up to be a Blues Brother or Bruno Mars, chances are, he won't even be able to pull off his own hat. So, way to set your kid up with some unmeetable expectations right from the start.
And you thought you weren't going to set any expectations for your child (impossible). Yet, despite all your efforts, your child is now destined to respect reason. Respect you? Not so much.

Seeds are not trends. They are seeds. They've been around for millions of years and our generation certainly didn't create them nor make them "hip."
If you must sprinkle everything you eat and drink with chia seeds, by all means, have a field day. But for crying out loud, leave your innocent child out of your madness. And just wait until the "Chia Pet" regains popularity... Your child is going to hate you... even more (if that's possible).

We're talking about your child here, not your morning meditation mantra. But if you happen to find your "zen" by pissing other people off, this is a perfect hipster name for your baby.

Let's get this straight. So, you absolutely categorically hate guns, but somehow like triggers? Oh, okay, we get it. It's because you're so ironic. This explains why "Zen" and "Trigger" make perfect sibling names!
If your considering "Trigger" for your baby's name, you seem to be confused. Your baby isn't a trigger. You are. You trigger eye rolls of epic proportions everywhere you go.

While we're sure your child's face will grace the Instagram feeds of many hipsters, there is no need for you to brand your baby after an app. Come on, people, we're better than this.
But if you insist on naming your precious baby after a social media platform then don't stop at "Insta." You might as well use "Graham" as their middle name. But, of course, you wouldn't dare spell it correctly. Maybe try "Graeme" or, even better, "Gray-ham."

It's time for a family unicycle ride! Gather the kids! "Soy, Tofu, Matcha, Sushi, and Moonshine, get your hip little butts in the Prius, pronto!"

Oh yes, please, let's continue with the trendy food hipster baby names. It pains me to admit this, but I actually have a friend who named her son  "Kale." It's seriously caused me to lose my Zen so much that I could seriously pull just the Trigger and Kale myself over it.

Oh yes, a favorite among hipster lumbersexuals. I'll admit that I love a well done rustic home decor. But rustic's trendy application needs remain in the realm of interior design. Unless, of course, you want to define your baby as "simple, homely, unsophisticated, rough, rude, and crude," then I suppose you're on the right track.
And don't tell me it's ironic. It's not. According to the New York Times, "Irony requires an opposing meaning between what’s said and what’s intended." What exactly is the opposing meaning you intend to communicate with this name? If you're merely attempting to be paradoxical, then you might as well name your baby "Hobo." But I suppose I shouldn't be giving you hipsters any bright ideas.

Just to prove that I'm not actually making these ridiculous baby names up, I will confess to knowing yet another hipster. (I live in Los Angeles, people, they are virtually impossible to avoid). Her kid's names? Fox and Arrow. Yep. And just in case you hoped this hipster baby name example is an anomaly, I have a neighbor with a baby named "Arrow," also.
Other hipster baby names of friends that, apparently, I have no desire to keep... Clementine, Ruby, Stella, Clark, Hunter, Willow, several Masons, and do I really need to continue? Well, guess I just cleaned up my Facebook friends, so check that off my to-do list.

Not to mention, Prince, Lord, Lady, King, Dame, and Master. These are all actual baby names, according to a book by Tobias Anthony, "Hipster Baby Names," Way to make a killing off of our generation's idiocy, Tobias. Seriously, well played.
Buy Now

So you want your baby to have "moves like Jagger," do you? Well, we're pretty sure even Mick Jagger himself would be annoyed by this baby name.
Socrates and Mick Jagger both know that the hippest man does not think that he is, in fact, hip at all. A true hipster knows that they aren't hip... and wouldn't even want to be considered as such. Yet, this is a catch 22 that hipsters just can't seem to catch... along with all balls and clues.

Inspired by the band, Fleetwood Mac, all babies named with this moniker receive a free pet owl at the hospital. And while the band's famous lyric states, "You can go your own way," when it comes to this baby name, we prefer to sing " you can go away," instead. We've yet to confirm but expect to soon be adding "Coachella, Hamster, Flower Crown, Cold Brew, Urban, Antler, and Mousse Tash" to the absurd list of hipster baby names.

And last but not least, "Folk," with which I will simply rest my case. But not without one last word of advice to you hipsters. Know that there is one universal truth in parenthood that applies to every single one of us. No matter how hip you are (or think you are), your kids won't think so. In fact, they are going to think you're embarrassing as all hell. Eventually, they'll resent you, too. The good news is that most likely, they'll forgive you, and one day they'll even accept you. And they'll always love you. As for the rest of society, we have no mercy. Don't let us cash you outside your local cheese shop. And lose the glasses. It's over.