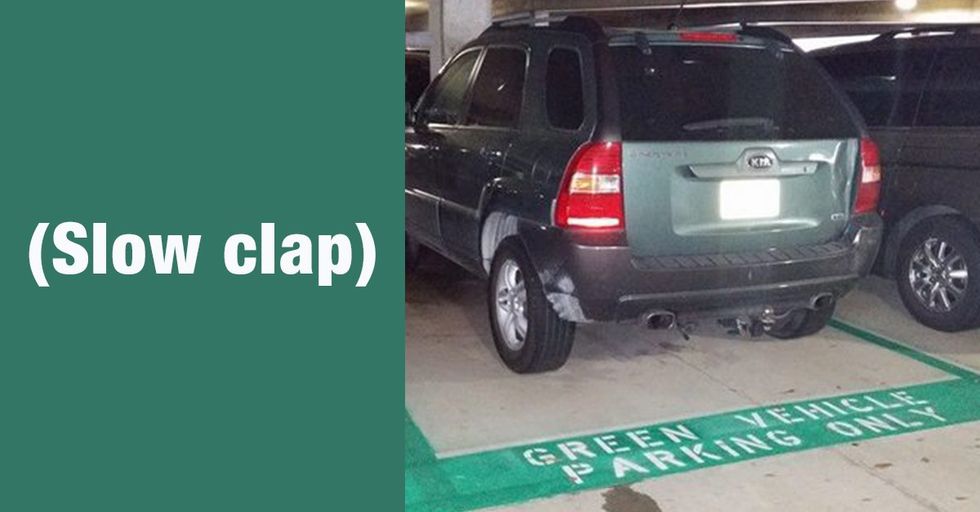 It takes a certain type of person to appreciate sarcasm in its finest form, and that would be a smartass. While they might sometimes get a bad reputation for their behavior, when done right, smartassery is a thing of beauty.

From perfectly worded replies to passive-aggressive notes to finding the perfect place to park their car, these people belong in the Smartass Hall of Fame.

What will you pick? Nobody knows! Except the smartass who organized this.

If I could rearrange the alphabet, I would put the letters U and I together. But you know what? N and O are already there.

No, he certainly isn't flying anymore. It seems the anti-flyer flyer was effective.

Who knew? Water is wet!

Super clever, but I have to wonder: Was it a really big problem having people post bills on a fence? So many questions...and Bills.

It is a really nice fabric, that much we know. But cotton is just much more breathable.

They should have been more specific.

Hey, they're not wrong. That's kind of how years work.

And then there are those rebels that went with an "X" and a smiley face.

Technically speaking, they are correct. It doesn't get any harder than that.

"I don't want to date my lunch. I don't even really like my lunch that much."

Come on, now. Didn't you take time to spellcheck?

Or you could, you know, maybe throw the yogurt out? Just a suggestion.

I don't think that's what they had in mind, but how can you argue with that?

I Scream, You Scream

We all scream because it's too cold and cramped in the freezer to truly enjoy the ice cream.

Maybe consult Web MD for some natural relief. Or prunes.

Spell check is your friend, even if the scientist and surgent are not. And in the time you spent making the sign, you could have changed the roll.

At least they're polite about it. Nothing is better than free.

Haven't we seen this before? I'm having deja vu.

I'll drink to that! And anything else you have to say.

Brownies. You don't mess with brownies.

The first guy struck out with dating his lunch and now this guy got friend zoned by the cans. The struggle is real.

His mom told him to "clean the bathroom like the Queen of England is visiting." What? He listened!

Listen, Siri isn't here for any of your crap. She's a tough-talking robot and she's going to stand up for herself.

Rebel Without a Pause

Clever, but like, as a person who loves following rules, this is giving me agita. I love rules.

They should have committed to the bit and had a whole tableau of a fallen ladder, person sprawled out, letters everywhere.

Making fun of spelling errors is a great American pastime and it brings me great joy whenever I witness someone doing it.

I hope this person always walks around with a Sharpie and a picture of Tom Hanks and does this on every garbage can they see. Whoever is responsible for this should win a Nobel Peace Prize.

In case you didn't already think that the guy driving the bright orange Tesla was a jerk... Here's his license plate.

The Art of the Deal

Look, it's all about hustle, and person number two has hustle. They also probably have a new iPod Touch.

They say that dogs can't read but come on! This is too perfect. I think we got a little Einstein pup on our hands.

What? It's not locked to the stair railing at all...

This is a big decision! Which rack of water has been in there the longest? I need the coldest bottle.

Sometimes you pay a price for being a smartass. Yes, a literal price.

That's some good advice from a mug. Thanks, mug.

Spelling is important, people! This is how you end up with pasta strainers on your refrigerator!

Oh, knives are supposed to be sharp? I didn't realize that. Thank you so much, knife, for telling me what the purpose of a knife is. Really, thanks so much.

There's almost nothing funnier than when someone responds to a rhetorical question. Classic smartass move.

You're Getting a Quote!

You might not want a quote under your senior portrait, but guess what?! You're getting one. High school is ruthless.

This is what happens when you try to cover up graffiti with a different paint color. It just gets noticed.

I bet one day it won't be terrifying for a vending machine to speak back to us, but until that day, I'll be keeping my dimes and quarters, thank you very much.