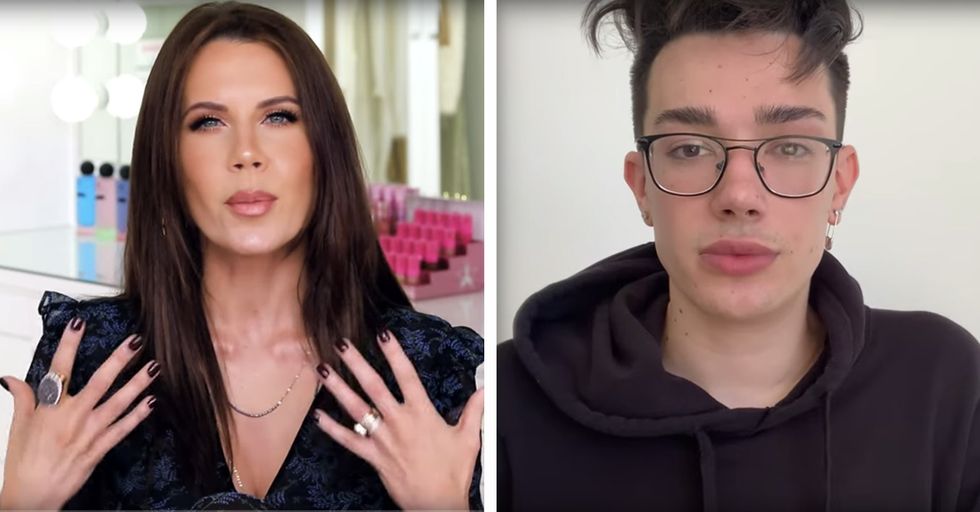 James Charles Lost 1.2 Million Subscribers in One Day over His Feud With Tati

Last week, the beauty-blogger world exploded, inviting the rest of us into a web of lies and betrayals in this niche community. The Tati Westbrook/James Charles feud has more surprises than the final season of Game of Thrones. There's even a third act reveal from a Dragun!

James Charles is a nineteen-year-old makeup artist with a massive social media following. Tati is a thirty-seven-year-old beauty vlogger who helped James break in and build his brand. A week ago, Tati made a video that ended her friendship with James, primarily accusing him of betrayal and also asserting that he's behaved in a sexually inappropriate way towards men who were not interested in him.

After this video, there was a movement to "cancel" James Charles, and then there was a whole lot more tea, backlash, and, of course, think pieces.

Keep reading to follow the insane life cycle of this story.

James started his beauty channel when he was sixteen.

He was a beauty wunderkind. There was something wonderful about watching a kid this young do such incredible make-up. At the time, his popularity showed the power of the internet: a platform for voices otherwise silenced or undervalued.

Around this time, James hit up Tati's DMs.

James had been a fan of Tati's before he started doing his own makeup tutorials. She was impressed with his skill and began promoting him on her channel, which was already well established.

In 2016, he was named the first male CoverGirl, which was huge. After that, he became mega-famous in this niche community. Within a few years, he had fifteen million followers on YouTube and another several million on Twitter and Instagram. He's what the kids call an "influencer."

With his new-found fame, he was able to work with people like Kylie Jenner.

Kylie is a mammoth figure in pop culture and make-up specifically. Her company, KYLIE COSMETICS, was recently valued at one billion dollars. She's one of the most followed people across all platforms. When she decided she didn't like SnapChat anymore, their stock price fell. That's power.

This year, James was invited to the Met Gala.

Only the most famous of the famous get an invite to the Met Gala, referred to as the Oscars of fashion. This year, the theme was "camp," so it had a more inclusive feeling than years past.

While at Coachella (the Oscars for Influencers), James posted an #ad for Sugar Bear Hair gummies.

Sugar Bear Hair is a supplement often promoted by Kardashians, Bachelor nation alums, and other influencers with millions of followers. Although supplement promotion has come under criticism, many influencers make most of their money through this kind of sponsored content ("sponcon").

Tati has a supplement company called Halo that James has never promoted. She felt like he went behind her back and promoted her rival's company after she's done so much to support him. James immediately posted an IG story apologizing to Tati, but only after fulfilling his contract with SBH and getting paid.

To heat things up, Gabriel Zamora, another beauty 'Tuber, made a video shading Tati.

Gabriel argued in his video that James can promote whatever he wants - Tati doesn't "have" him exclusively just because she's been his mentor. He thought that the whole situation was ridiculous.

After Gabriel's video, Tati released The Video Heard Round The World.

It's forty-three minutes long, and it's as intense as it sounds. In the video, Tati lays out all the ways that she's helped James (there are many), she lays how he mishandled the SBH promotion (he did), she accuses him of trying to stoke the fire by talking to drama channels (more on those later) and finally she drops a big bomb. She accuses him of coercing straight men into hooking up with him. Ultimately, that's what broke the back of his fame.

James responded to that video with his own video.

James posted an eight-minute video response, makeup-less, simply titled "tati." In the video, he apologizes to Tati for how he handled the SBH deal and cries while talking about how much he loves his mom.

After these videos came out, "James Charles" started trending on Twitter, which, these days, is mostly a bad thing.

Tati just cancelled James Charles with her new video and honestly I'm living for it, i mean it was literally Tati e… https://t.co/8mIIpUXYJi
— teresaaaa🧃 (@teresaaaa🧃)1557510345.0

He calls his fans "sisters," and #byesister took off. People were mostly appalled at his sexual coercion. I only knew James Charles as the kid from the Met Gala and all of this flooded my timeline. The story broke out of its niche world and into the internet writ large.

James lost 1.2 million followers in one day, which is the most that anyone has ever lost in one day. Over the weekend, that number continued to rise. Although his numbers have stabilized now, he's lost a total of three million subscribers on YouTube and even more across social media platforms. Even the Kardashians and Ariana Grande have unfollowed him.

She had five million subscribers on YouTube when this began and now she has ten million. The view count on The Video is over forty-five million. This is one of the most viral things to happen so far in 2019.

Many people who had never heard of these people followed along.

me getting ready to watch a 43 minute video by tati westbrook, whom I have never heard of, exposing james charles,… https://t.co/WeAABG6yhP
— marshall lo (@marshall lo)1557539128.0

James Charles had been in the news because of the Met Gala, so once his follower count started its historic crash, the news hit the broader world of the internet. Buzzfeed posted a great explainer for people who didn't know the Game of Beauty on YouTube. The story took off.

Jeffree Star chimed in, surprising no one.

Jeffree Star has never met a scandal that he didn't want to involve himself in. In a now-deleted tweet, he backed up everything that Tati said and added that these accusations of sexual misconduct are why James isn't allowed at his house.

James' little brothe, Ian, tweeted about the situation, and Jeffree Star came for him.

In a now-deleted exchange, Ian said that people act tougher on the internet than they would in person, and Jeffree quote tweeted Ian accusing James of being a predator. Jeffree was called out for bullying a teenager and deleted the exchange.

This is not the first feud for Jeffree. He had a whole thing with Kat Von D a few years ago.

Tell me if you've heard this one before, but the two beauty behemoths exploded at each other over social media about various business practices and feelings.

The beauty wars are real.

In the game of eye shadow, you either win or you die. Chaos is a ladder, winter is coming, Cersei deserved better.

With all of this scrutiny on James, some bad tweets and old scandals resurfaced.

James has had a few scandals, which isn't surprising given that he became famous under the age of 18. He's said some things that have been deemed transphobic, he posted comments on a Shawn Mendes livestream that fit with these most recent accusations of harassing straight guys, and his caption on his Met Gala Instagram photo comes off as insensitive and privileged.

James made a joke about going to Africa and getting Ebola, which is neither funny nor appropriate. He was accused of racism and stereotyping. He posted a long apology for his comments.

With the re-examination of James Charles came the backlash to Tati.

She was accused of only distancing herself from James once James directly affected her business, despite his history of insensitive and ignorant behavior. The tables started to turn.

Following these back and forth videos and accusations, Nikita Dragun posted screenshots proving that James hadn't preplanned his support of Sugar Bear Hair gummies.

heard a situation needed some clarification 👀 my friend was in an emergency and texted me in the moment... unfortun… https://t.co/hHopxZ1sja
— Nikita (@Nikita)1557808013.0

One of Tati's main criticisms was that James planned to promote her rival and didn't give her the heads up. He's maintained that the only reason he promoted SBH was to get him out of a tricky situation at Coachella. He needed access to a VIP area and used SBH for that access in exchange for a post. Dragun posted a text exchange backing James' story.

But then other screenshots came out refuting that story.

A so-called tea account called Tea Spill posted screenshots contradicting the texts from Dragun. James had initially told them that SBH had reached out to him, not the other way around.

Tea accounts are the secret sauce of internet feuds.

We live in a world wherein transparency reigns supreme. Any person with an Instagram account can track who is following who, who is liking or commenting on what. There are Twitter accounts, YouTube channels, and Instagram accounts dedicated to following that kind of minutiae and reporting on it. With the James/Tati scandal, these accounts were posting hour by hour updates on all of the moves and responses.

After Tati posted her first Instagram story, she found out that James had been talking to one of these accounts about their argument.

In her video, she mentions that she tried to handle this on private channels but found out that James had already spoken to TeaSpill and HereForTheTea. So she talked to them as well. These accounts are the new TMZ or Radar online, especially for people famous on the internet.

Several of these tea accounts reported on this feud until it transcended the beauty world and entered mainstream gossip media.

Influencers regularly use the fact that their social media moves are monitored like this to generate news about themselves. Follow and unfollow people, comment something vague, imply a relationship or a fight, and you're splashed across social media through these accounts. If you get traction there, maybe a more prominent outlet will pick up the story. No publicity is bad publicity. The medium might be different, but the message is the same as it ever was.

Tati's posted messages to her Instagram and James Charles has conspicuously stopped posting. All of the characters involved in the story have continued to comment about it. At this point, it's a subscriber number generator for everyone.

On May 16, Tati released another video to YouTube saying that she wants the world to stop criticizing James.

Are you guys having a hard time following this? Because it just keeps spinning...

Now, another tea account is calling for people to "cancel James."

As the story has continued to evolve, the consensus seems to be circling support for no one. And this is the problem with Cancel Culture in general. No one is perfect. Most people aren't even close to perfect. When you start to throw stones, those stones are more like boomerangs that take down your own house.

The truth of the Sugar Bear Coachella weekend may never come out.

No one involved seems to be a reliable narrator. But, Dany burned down King's Landing for no reason, so all men must die. THAT'S THE TEA. James Charles posted another rebuttal this past week, and the saga continues...