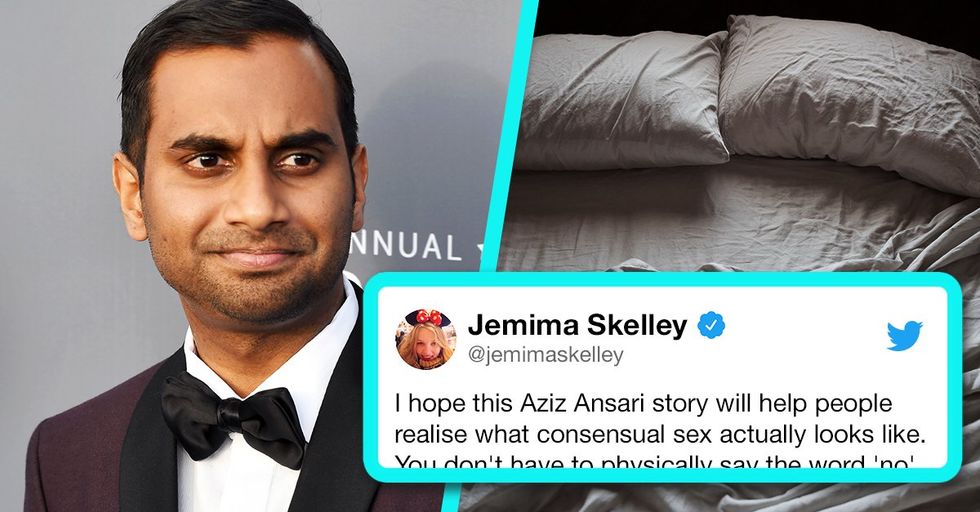 31 hours after after Babe magazine released an account of a 23-year-old photographer's horrifying date with Aziz Ansari, the Master of None star is finally addressing the allegations.

Grace, the woman named in the piece, met Ansari at the 2017 Emmy Awards after-party. After bonding over their use of film cameras instead of digital ones, Ansari asked Grace out on a date.

Grace sensed Ansari was rushing to finish their dinner at Manhattan hot spot, Grand Banks, an Oyster Bar on the Hudson River. The reason for this became clear when Ansari took Grace home and proceeded to try to sleep with her.
"It was 30 minutes of me getting up and moving and him following and sticking his fingers down my throat again. It was really repetitive. It felt like a fucking game," Grace said, comparing the ordeal to a football play.

Things came to a head when Ansari finally noticed her nonverbal cues and asked her if she was okay. "I said I don’t want to feel forced because then I’ll hate you," Grace replied. "And I’d rather not hate you."
To this, Ansari replied," ‘Oh, of course, it’s only fun if we’re both having fun.' " And then he suggested, " ‘Let’s just chill over here on the couch.’ " That's where he then coerced Grace into giving him oral sex, afterwards saying,  " ‘Doesn’t look like you hate me.’ " Grace went home crying.

When the actor reached out to her again, she sent him a text detailing exactly how she felt, and then she went one further, detailing their encounter to Babe in a move one writer at The Atlantic terms "3,000 words of revenge porn". Grace doesn't see it that way. She says she felt compelled to speak out after she noticed Ansari wearing a "Times Up pin."
Stories of sexual assault and harassment have been dominating the media ever since  news emerged that producer Harvey Weinstein had harassed, assaulted, and raped 84 women over the decades. What was once considered acceptable is now being looked at with a critical eye as women begin to stand up against the prevailing norms that have kept them silent for so long. As Grace explains, "It took a really long time for me to validate this as sexual assault...  That’s why I confronted so many of my friends and listened to what they had to say, because I wanted validation that it was actually bad." Now, Ansari is replying to the allegations.

In a statement to People, Ansari said,

In September of last year, I met a woman at a party. We exchanged numbers. We texted back and forth and eventually went on a date. We went out to dinner, and afterwards we ended up engaging in sexual activity, which by all indications was completely consensual. The next day, I got a text from her saying that although ‘it may have seemed okay,’ upon further reflection, she felt uncomfortable. It was true that everything did seem okay to me, so when I heard that it was not the case for her, I was surprised and concerned. I took her words to heart and responded privately after taking the time to process what she had said. I continue to support the movement that is happening in our culture. It is necessary and long overdue.

While this is all good and well, Ansari has literally built a career out of parsing through the shadow areas and awkwardness between men and women in the dating pool. His book Modern Romance was a New York Times bestseller, and Refinery29 crowned him "a certified woke bae."

That Aziz Ansari piece isn't surprising to me but it is difficult and heartbreaking because I've been there, many t… https://t.co/9Ik8K0jIXD
— Femmefeministe (@Femmefeministe)1515950461.0

Ansari is one of those men who is supposed to be safe. He has crafted an entire persona based on the idea that he's one of the guys you should feel at home with. A male feminist. An ally.
Which was why Grace didn't leave when things took a turn.

I didn’t leave because I think I was stunned and shocked. This was not what I expected. I’d seen some of his shows and read excerpts from his book and I was not expecting a bad night at all, much less a violating night and a painful one."

Ansari's recollection of the night as compared to hers is striking different. He "was surprised and concerned." Everything was "by all indications was completely consensual." But was it? Caitlin Flanagan of The Atlantic ruminates, "Together... two women may have destroyed Ansari’s career, which is now the punishment for every kind of male sexual misconduct, from the grotesque to the disappointing."
Here's the thing Flanagan, and other people who pooh-pooh Grace's story fail to take into account. Ansari is a 34-year-old adult, as compared to Grace's 23 years, and even if there weren't that age difference, babies – that's right, babies – can read when another person in uncomfortable and unwilling. And even if Ansari didn't notice Grace's tense body language, there was her actual language. Grace told Babe that she told Ansari, in no uncertain terms, "No, I don’t think I’m ready to do this, I really don’t think I’m going to do this." She stated her objections more than once.

Have you seen this video about tea and consent? Those defending him should watch it. It fact, everyone should watch it and share it.https://t.co/BoapscGAzw

If it's frowned upon to force people to drink tea when they don't want to drink tea, then ditto sticking your fingers in somebody's mouth and other parts of you into another person.
If Ansari didn't notice Grace's discomfort, it's because he didn't want to notice her discomfort. As per his actions at the restaurant, he'd been set on sex even before they arrived at his apartment. The date and all his actions beforehand had been merely performative – which is not to say that sex is bad. Both men and women enjoy sex, this is a necessary function of human biology. What is wrong is pushing and coercing people when they are obviously not willing, and ignoring all the signs that point to this.

A few people have asked me about the Aziz Ansari thing & "grey areas" and...nope. Let's use the tea analogy, shall we?

In the situation described by Grace, he didn't ask her if she wanted tea. He just made it & put the cup of tea in her hand. She put it down. 1/4 — Emmeline May AKA Rockstar Dinosaur Pirate Princess (@RStarDinoPirate) January 15, 2018

He pushed it back into her hand. She put it down again. He kept picking it up and putting it back in her hand. 2/4

Even after she was clear that his behaviour was making her feel resentful, like she was being forced to drink it, he carried on picking up that cup of tea and forcing it back into her hand. 3/4

That would be weird, right? If someone did that to you with tea?

Of course it would be weird. Because it would be pretty clear she didn't want to drink the tea. Whether it's tea or sex, consent is everything. And it's not flipping hard. 4/4 — Emmeline May AKA Rockstar Dinosaur Pirate Princess (@RStarDinoPirate) January 15, 2018

The problem was not that Ansari wanted sex, it's that he felt entitled to it, and he kept pushing even when Grace said no.

something I'm realising through the Aziz Ansari business is that it seems many men sort of expect women to go throu… https://t.co/17jlPqPOnE
— hot librarian (@hot librarian)1516015615.0

A lot of men will read that post about Aziz Ansari and see an everyday, reasonable sexual interaction. But part of what women are saying right now is that what the culture considers ‘normal’ sexual encounters are not working for us, and oftentimes harmful.

And therein lies the issue – #MeToo and Times Up are massive movements right now because something is wrong. For centuries, women have put up with bad and sometimes outright criminal behavior for the sake of not being seen as "crazy" or a "b*tch". The Ansari date is the epitome of this phenomenon. Grace said no, he persisted, end of story. In moving forward, this is a lesson. Other people's bodies are not toys. They contain living beings with thoughts and emotions, and when engaging in sexual encounters with them, it's best to treat them like they are – autonomous people, rather than insensate objects you can play with and position as it suits you.