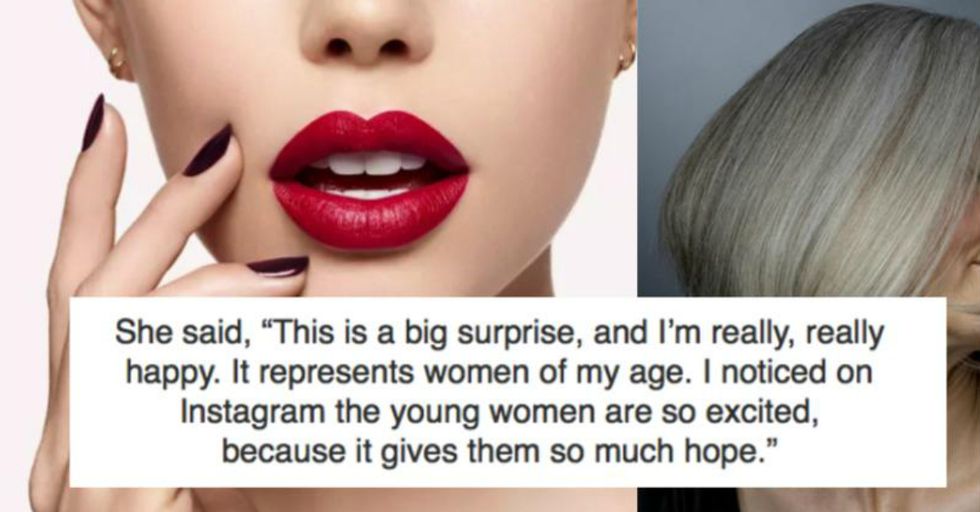 A 69 year old grandmother isn’t exactly what most people think of when they hear the word “model”. But, um, maybe they should.

Enter Maye Musk: Not only is she the mother of Elon Musk, founder of SpaceX and Tesla, she's the stunning 69-year-old who just signed on as CoverGirl’s newest model.  As a model, a business owner, a nutritionist, and yup, a grandma, there’s basically nothing this woman can’t do.

And in her own words, she’s just getting started.

In September, Maye Musk snagged a spot as the newest CoverGirl along with Issa Rae, Zendaya, and Janelle Monáe. The offer came after just last year, when at 68 years old the stop-you-in-you-tracks-gorgeous Maye signed a contract with IMG, the modelling agency powerhouse that also represents models like Gigi Hadid, Karlie Kloss, and Giselle.

At 69, Maye Musk is the oldest woman to be a CoverGirl.

And she’s freaking beautiful. But don’t make the mistake of thinking that Maye just happened upon her new position, she worked hard for it. Maye’s been modeling for 50 years. Talk about putting in your time. But that doesn’t mean Maye isn’t excited about the opportunity to model for Covergirl. She said, “This is a big surprise, and I’m really, really happy. It represents women of my age. I noticed on Instagram the young women are so excited, because it gives them so much hope."

Maye will join a diverse group of models who represent the brand.

It’s obvious CoverGirl is focusing on featuring models of all different types in their ads. Last year, a CoverGirl ad featured Nura Afia, their first model to wear a hijab. Soon after, James Charles, a YouTuber, became the first male model to represent the brand. And it makes sense! When so many different types of people like to wear make up, shouldn’t the models who show it off be just as diverse?

Maye’s modeled in advertisements, on runways, as a cover model, you name it, Maye’s done it.

Maye’s appeared on the cover of Vogue in Italy and Korea, Elle in Canada, New York Magazine, and Time. She’s booked campaigns with Target and Virgin America. Last year she walked in New York Fashion Week.

Maya’s modeling portfolio goes back to the 1960s.

Have we mentioned this woman works hard? And has been for the last 50 years! She has been working as a model since she was 15. While she had steady work all through her life, surprisingly, these last few years have held the most success for her modeling career, an amazing thing to say about a woman who is nearly 70! This definitely has to do with Maye’s extremely unpretentious, down-to-Earth attitude about her work, she said in an interview with Vanity Fair, “I don’t care why a client books me, as long as they book me."

Maye has a Master’s degree in dietetics and nutritional science. She works as a dietitian through speaking, consulting, counseling, writing and media work. She said of her own diet, “Science and common sense. I don’t do crazy stuff. I don’t do a lot of fad diets or supplements."   She’s also got some very strong feelings about about diet trends, for instance almond milk, which she calls “plant-based water." Of the juicing fad she weighed in, “Yeah, I don’t juice." Um, hold on. *Immediately throws away all almond milk and juice in fridge to be just like her.*

And NBD but she was in a Beyoncé video.

Yup. You can catch a very quick glimpse of Maye in Beyoncé video for her song Haunted. And, duh, she looks amazing in a white cape, long black gloves, and an array of cross necklaces.

Oh, and did we mention her son is Elon Musk?

It’s not a coincident Maye has the same last name as entrepreneur and inventor Elon Musk, founder of SpaceX and CEO of Tesla, because she’s his mom! Maye has three children: Elon, Kimbal, restaurant entrepreneur, and Tosca a film director. Are they the most ambitious family on the planet? Nobody can say for sure but, yeah, probably.

She has a no-nonsense attitude.

Maye worked hard to be where she is, and she doesn’t take it for granted. Even after over 50 years of modeling, she often hashtags Instagram posts featuring her modeling successes #JustGettingStarted.

Age is just a number for Maye.

Maye has said that after she stopped dyeing her hair a few years ago and let it grow in its natural gray she started getting more bookings than ever. The thing that so many women try to cover up became Maye’s most sought-after feature. Maye told The New York Times, “Aging has been good for me. You develop confidence, you’re able to handle the knocks a little easier. I model for my age. I’m not trying to hide it and say I’m 50. I’m so proud that I’m going be 70." Seriously could not be more obsessed with this confident, hard-working woman who doesn’t let any standards of beauty define her. If this is her just getting started, please never let her finish.