The Newest Internet Trend Is... Parents Throwing Cheese on Their Kids | 22 Words 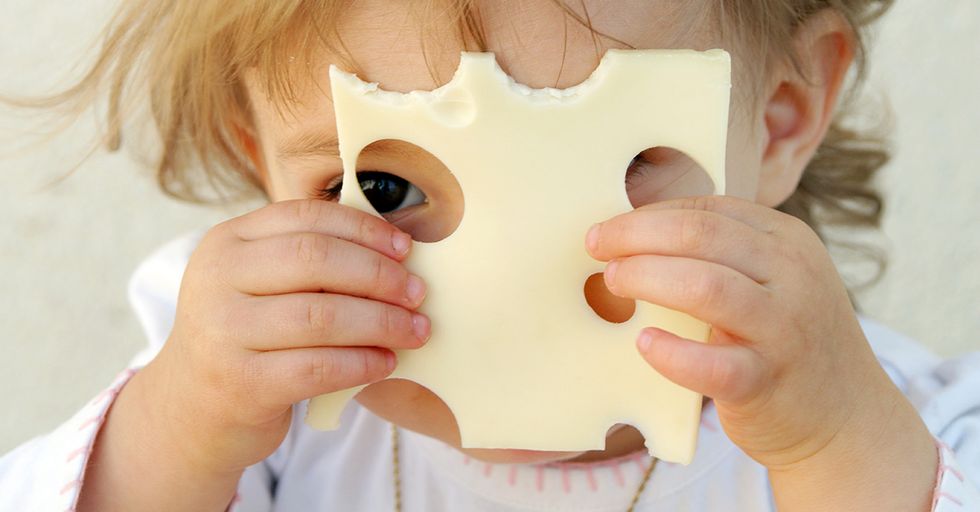 The Newest Internet Trend Is... Parents Throwing Cheese on Their Kids

Okay, so if you don't know me, you might not know that I have a No Cheese Wasted policy that is strictly enforced in my apartment. You might be thinking to yourself "but John, what about cheese that goes bad?" and to that, I would say, "you underestimate how fast I can eat an entire bag of Costco shredded cheese." Impressed? Probably not.

But there's a new "wasteful" cheese trend attacking the internet right now that I am so on board with. And it's my job as a pretend journalist to tell you exactly what's going on here, but I almost don't want to, because the videos much better speak for themselves.

But basically, parents are throwing cheese on everything, their children, their pets, their partners. It's just an American cheese paradise, and I (and the Kraft Corporation) am loving it. Please enjoy your favorite slice of plastic cheese as we present to you the best Twitter videos we can find, along with some of our favorite internet challenges this year.

We all know that 2018 was filled with video challenges...

From challenges including our adorable pets...to making our little siblings scared-straight.

Okay, this one was kind of mean. Right?

And we can't forget the plethora of dancing challenges.

Like the famous #InMyFeelings challenge inspired by Drake's music.

But ladies and gents, it's a new year, and that means there's a new challenge in town.

This one involves babies and cheese, and quite frankly doesn't make much sense.

Like, who can't resist babies and cheese? What a magical combination.

The video that started it all.

The tweet has since been deleted, but the internet is forever, so please enjoy the first bad dad on the internet to throw cheese on their child.

"Can I interest you in some more food?"

I love how her reaction is a combination of shocked and incredibly offended.

This baby just got sent to the shadow realm.

His entire 3-month life just flashed before his eyes.

Does that cheese already have a bite taken out of it...?

Well I guess it does now! She is so unphased by this entire challenge.

Some people think this is super weird.

I disagree, it's harmless and hilarious. Unless your child has an allergy to American Cheese. And if that's the case, consider returning it.

I am offended by this kindness. What are children for if not for funny internet videos? And to the army of moms about to assault my facebook page, that was a joke. Children are angels and should be met with as much love and respect as I was when I was a child (very little).

This is a new twist I definitely wasn't expecting.

This cat seems more upset than like 99% of the children I've seen as it That's So Raven style sees a vision of the future.

A succinct "no thank you."

"Hi there, I'm sorry but I will not be participating in this today." Which is pretty much my mood at all times.

My entire life is a lie, and I'll never find happiness because people are deceitful and I am gullible. I just wanted to see a happy corgi, was that too much to ask?

But it's arguably a much better prize. Can someone come over and toss me some lunch? I'm getting hungry.

I love the ones where the children just don't know what to do with themselves.

"This is a completely new situation to me, and I don't know how to react." Preparing children for the real world, one cheese slice at a time.

This baby gets a little help.

Man's best friend strikes again. I wish my dog was this much of a bro when I was a baby. Instead, we gave her to a friend because she freaking hated me. Who could blame her?

Because of course, this is what would happen in a house full of dogs. Brb going to go acquire like six dogs somehow.

Except I stay in the room because the memes are too powerful for me to resist.

Gang violence is not a joke. That baby could have died.

I love that he's in full dad mode here. "Did you just interrupt my television?"

Scrappy-Doo here will not be humiliated by your cheese challenge!

Why couldn't my parents have assaulted me with cheese slices instead of Catholicism?

It's confusion and delight, which is kinda like what happened to me the first time I chugged one of my grandmother's Mike's Hard Lemonades. And then I was immediately punished with a piece of American. Just kidding, my parents have never been that ahead of the curve.

I'm hoping that wasn't a huge block of cheese because this just got dangerous. Someone call CPS.

When the cheese becomes a mask.

Next time I go to the spa, I'm asking for this. I don't care if I have to bring my own cheese.

Again, that's not how this works.

That banana isn't even yellow, so I don't see where the confusion is coming from.

"Well, I guess I'm in this weird food chair, so it's time to eat." My life philosophy. I still eat at those things.

This one has it all.

This baby is shook.

I love that he's decided he's just received his new favorite toy. These babies don't realize the gifts they're getting.

What a fancy cheese... I wish my cheese challenges could be so expensive. Maybe if this article does really well... (pls share with your friends. Smash that like button, be sure to subscribe for more.)

And last but not least, this happy boi.

What a treat. These parents just sharing the joys of cheese with their youngin's. It touches my heart.

Have you tried this cheese challenge yet?

Or does it violate some kind of ethical code? Because that's fair. If you want to see more videos, check out the #cheesechallenge on Twitter. We know you want to.