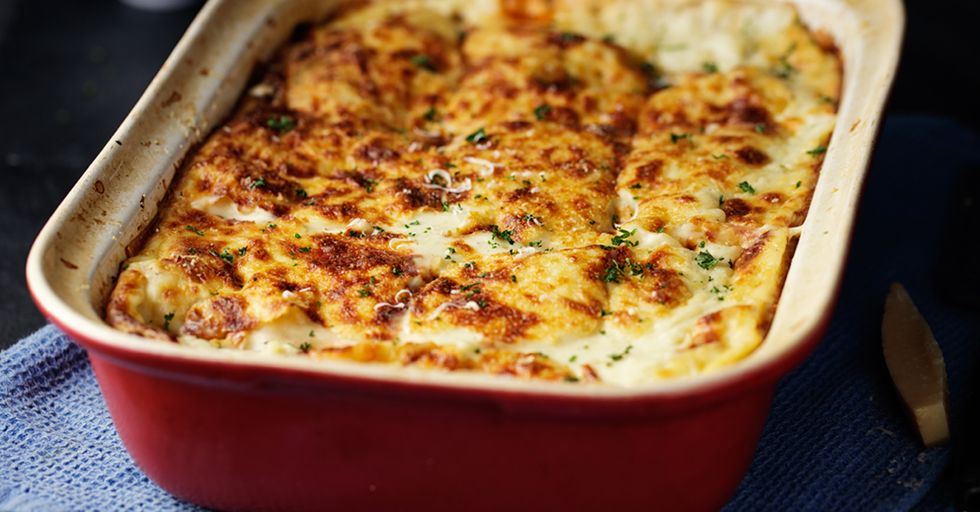 People Are Freaking out About the Newest Trend: Gender Reveal Lasagna

It is the year 2030. People gather around. They are chatting and waiting. Anticipation fills the air. Suddenly, it gets quiet. A firework is lit. There is an explosion. A crackle. A brilliant white burst in the sky, and then it fizzles, the light shaping into letters as it falls. The message reads, "Gender is a construct."

Until this utopic vision comes true, we will have many gender reveal parties. For parents-to-be, for some reason, it has become popular to learn the sex (not the gender, really) of their unborn child by slicing into a cake or bursting a balloon filled with colored pink or blue (those traditionally gendered colors) dust. It is safe to say at this point that gender reveal parties have gotten out of control. One actually started a forest fire. And yet, we insist on continuing to up the ante. The latest in the gender reveal trend has the news about the genitalia of your baby baked into none other than a piping hot dish of lasagna. Yes, really.

It is melty and gooey and hot and delicious. Garfield knows what's good, and what's good is lasagna.

Gender is a made up concept that has really only caused problems throughout history. But parents-to-be can't seem to help but surprise themselves with the sex of their baby in a variety of ways.

Of course, almost all of them turn out to be disastrous.

You can search "gender reveal gone wrong" on Google or Twitter and entertain yourself for hours.

If there's a gender reveal party that has gone right, congratulations. You are the only one.

In fact, some gender reveal parties have ended in straight-up tragedy.

They were probably fighting because they had to have a gender reveal party at an Applebee's. I know that would make me upset.

Seriously, there are too many cautionary tales.

It is a wonder that gender reveal parties are still allowed to happen. They should be banned forever because A- they're nonsense, and B- something almost always goes terribly wrong.

A video released by the US Forest Service shows the moment when a gender reveal party in Arizona went horribly wron… https://t.co/CbCxkr6s0t
— CNN (@CNN)1543368840.0

If you want to know the sex of your baby, fine. I guess. But there is plenty of evidence to suggest that gender reveal parties should be abolished.

If you are still unconvinced, behold the gender reveal lasagna:

That's right. Gender. Reveal. Lasagna. That's a phrase I never thought I would say or type in my entire life. And yet, here we are.

Villa Italia Kitchen sent out a PR email to many in the food media industry touting their brand new gender reveal dish.

Because many in the food media industry are also on Twitter, the gender reveal lasagna popped up pretty quickly on everyone's favorite/least favorite social media site.

The gender reveal lasagna seems to be a regular lasagna...

Only it has been made with cheese that has been dyed pink or blue depending on the sex of the unborn child.

We're not even a month into 2019 and already, we are forced to contemplate eating dyed blue cheese. Come on, people!

This GIF about sums it up:

Sure, it sounds disgusting. But many were at least a little morbidly curious about it.

I mean, there are a lot of physical and philosophical layers to the idea of a gender reveal lasagna.

For those asking... no, it would not be 'sausage or no sausage'. They are making the cheese filling pink or blue.
— Lindsay Guentzel (@Lindsay Guentzel)1548180828.0

"Sausage or no sausage" lasagnas would have been more appetizing to look at, but they probably wouldn't have had nearly the effect that this colored lasagna is having on people.

The reactions to the advent of the gender reveal lasagna were pretty universal.

Almost everyone was absolutely revolted by the idea and it caused them to weep for humanity.

Some just couldn't even wrap their heads around the concept.

Understandably. It makes no logical sense. We're all surprised. We're all taken aback.

Poor Julia, a reporter at BuzzFeed, was broken by this news.

Same, Julia. Same. The close-up of the picture is seriously nauseating. Who thought that looked appetizing?

If we sing about it, maybe that will make it go away? Become the stuff of dreams? Of imagination?

But until that day, we're stuck here looking at this blue lasagna.

This picture is an insult to Italian food and babies everywhere. Really, it offends on every level.

Here's one of many things about the gender reveal lasagna:

This is SO TRUE. Where's the sauce? Is it just pasta and cheese? Nasty, dyed cheese?

The consensus on the Internet is that if we are members of a species that comes up with something like gender reveal lasagna, we don't deserve to go on.

However, it would make a good name for a band.

It would have to be that sort of screamo death metal music because that's what the words "gender reveal lasagna" make you want to do.

This! This a million times:

Gender is already an unnatural obsession in our culture. Gender reveal lasagna just piles on the unnatural.

Of course, the memes and jokes were swift and hilarious.

This is a well-intentioned curse:

with hand upon the bare ground, I lay my curse upon every gender reveal lasagna, cake, cookie, mochi, steak, and ot… https://t.co/ZQOzpsa9GU
— Jared Pechacek (@Jared Pechacek)1548200649.0

But somehow, I don't think you have to hex the blue lasagna with no sauce to make it have the texture of wet cement. Just a hunch.

We should get rid of gender reveal parties altogether.

And we should have lasagna eating parties instead! Everyone can get together and chat about how you can't wait for the new baby to express themselves exactly how they want to over huge servings of saucy, regular-colored lasagna.

Unfortunately, we totally gave the gender reveal lasagna people what they wanted.

But how can you not address the elephant in the room, especially when the elephant looks like something an Italian chef would serve on the space station in the year 3019?

Gender reveal anything is a ludicrous concept.

Just let your baby be a baby and let your lasagnas be regular lasagnas. For the love of all that is holy.

At the end of the day, there is one thing we should all be doing...