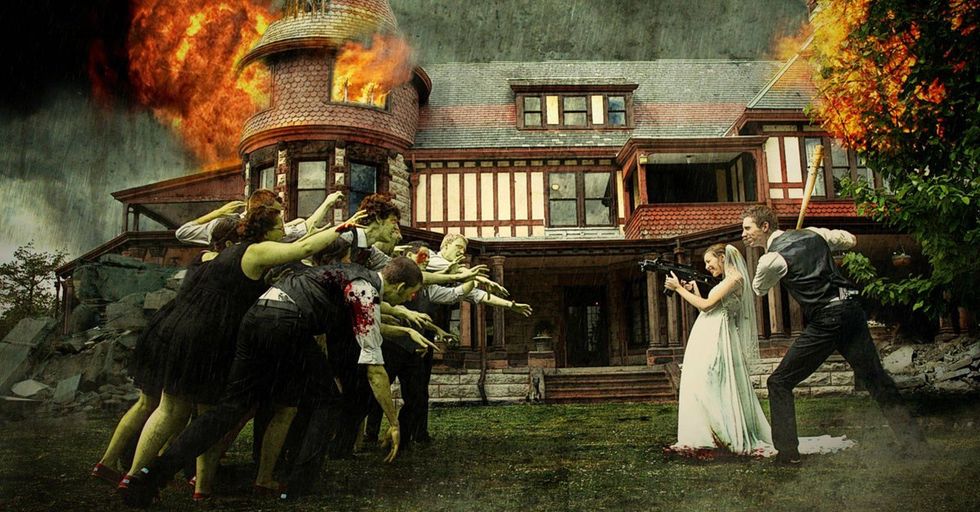 Grab your sensible heels: wedding season is just around the corner! Spring means weddings and whether this is your first year attending a wedding or if you've been going to roughly five a year for the last five years (shout out to all the 20 and 30 somethings), you probably have an idea of what wedding photos typically look like. The bride and groom holding hands, the wedding party smiling at the camera, maybe even a shot of the couple kissing while everyone in the background cheers.

In general, most people don't get too wild with their wedding shots. After all, these are the photos you're going to cherish forever and show your children and grandchildren, and most importantly post all over social media to brag about how great your wedding was (Just kidding! Sort of...).

But not everyone takes a traditional approach to their wedding photography. Like many wedding trends in the last few years, many people are putting their own spin on what once was pretty standard. But this time, instead of mismatched bridesmaid dresses or a smores bar instead of a cake, people are going a little bit further and photoshopping some pretty crazy stuff into their wedding photos.

When you think of weddings, you probably think of photos like this:

Just lovely, nice shots of the bride and groom and their wedding party, right?

Everyone wants their wedding to stand out.

Then editing in crazy stuff like zombies. Who doesn't want to fight zombies on their wedding day? It's not like you're busy or something.

This couple made it look like they were in the middle of a zombie apocalypse during their big day.

In this photo, the whole wedding party got involved.

Photographer Quinn Miller took this photo, for better or for worse.

This wedding party actually looks pretty excited to be chased by a dinosaur.

Maybe it just wants to join the wedding and get in on some line dancing! This photo was taken by Chris Giles.

Not saying this would be everyone's thing, but some people would be very excited about these photos.

I wonder if Jurassic World ever did a wedding?

This was taken by photographer Steven Kowalski.

Another take on the Star Wars theme.

This one, by Little Blue Lemon, is a little crazier.

People really love running away from Star Wars stuff at their wedding. This one is by Joe Roberts.

They aren't half bad.

Some of them are sillier than others.

But still so majestic and beautiful. This one was made by Reddit user StinkStar and it's truly a thing to behold.

Barney would never do this!

They're also responsible for...whatever this is.

How did that giant shark fit in such a small pond, though? I mean come on, they should at least be realistic.

This bride and groom got wild with a King Kong shoot.

Maybe he was the officiant? This photo is by Ondrej Hruby.

Hruby also did this photoshoot complete with a visiting dragon.

You might say this wedding was about to get lit.

This one is an alien invasion wedding.

So unfortunate it happened on their big day! This photo was taken by Owl's Eye Studios.

We know who is on the case.

The truth, and the three-tiered cake, is out there.

Who ya gonna call about this one? This photo is by Knight Image Photography.

Well, this is terrifying.

This shot was taken by Joseph Esser.

The worst part is these guys didn't even RSVP.

And they didn't bring a gift! This shot is by Jens Nink.

This is a great take on the genre.

Run for your lives! He might want to play! This photo is by SimplyTwo Photography.

Sometimes the bride and groom do not ask for the photoshop.

Well, now we will have nightmares forever.

I wonder how long it took her to notice?

This bridal party committed hard to this.

The T-rex seems to be the most popular choice.

A good wedding-destroying dinosaur for sure. These photos are by Jamaal Allen.

Oh no, watch out!

This is getting a little out of hand.

Would you photoshop your wedding party like this, or is this trend just a little too weird for you?