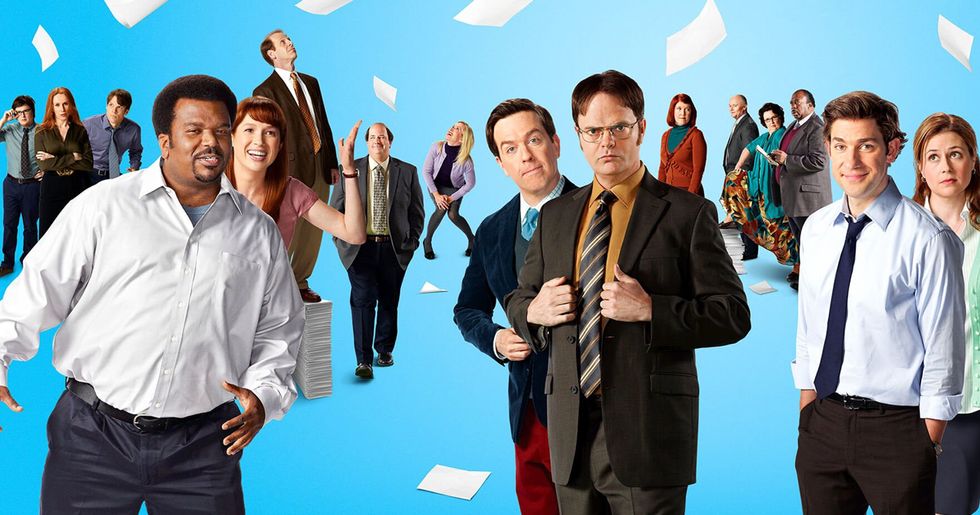 Memes from 'The Office' That Will Have You Quoting Wayne Gretzky

Is there any show more re-watchable than The Office? With nine seasons on Netflix, it's long enough that by the time you finish season nine, you forget everything that happened in season one (or, let's be honest, season two — we all skip season one).

The NBC sitcom was just serialized enough that you can follow a long-term storyline ("Oh, this is when Michael starts his own paper company in his house, right?") but not feel lost if you jump in and watch an episode on its own.

And it's The Office's endless re-watchability that's made it a favorite of the internet's long after it went off the air in 2013. That's why The Office memes come fast and hard, mostly from Reddit's /r/DunderMifflin subreddit. And so, here are the best memes from the show that deserves a yogurt lid-medal.

I keep getting Kevin no matter what I do :(

If you take a "What character from The Office are you" quiz and get Michael, so you retake it, changing your answers until you get Jim... you're definitely a Michael. - TheHonestModerator

Kevin wears his reading glasses to play poker, but not for his job of crunching numbers all day as an accountant... - [account deleted]

She always had a taste for beets.

My best friend just revealed that Rainn Wilson used to babysit her. - lejosep

Big Bang Theory is an attack on those who like science and comic books.

Ryan was the worst.

Vegans getting excited for dinner. - Bmchris44

Thank god Kevin made it out okay.

The Scranton Strangler was at Dunder Mifflin! - Strike_Gently

How is Pam still making me cry after all these years and also in real life?

A Tweet to Jenna Fischer read: I'm watching The Office for the first time and I'm very sad to hear you two aren't together in real life Jenna replied: If it makes you feel better, I found my Jim and he found his Pam — they just happen to be named Lee and Emily :) - Bmchris44

Watch out for cars.

My city had an "Office Trivia Bar Crawl" this weekend and I went as Meredith on casual Friday. - LaurenOKerr

It's sweet and also an important lesson about not doing crimes.

Boyfriend gave me this poster of Prison Mike made entirely of pictures of us. - katherine_angel

Kelly had some rough days.

We've all been there.

When you're watching The Office Season Five Episode 24 and you pause it at 17 minutes and 31 seconds. - drflashpoint-

Prison Mike will forever be iconic.

Won the school art contest with this sculpture. - SweetPinkDinosaur

What did you think was going to happen?

They go all out for holidays at Dunder Mifflin.

On my 9th rewatch or so, I realized they dyed the water green on St. Patrick's Day. - alex__whitwam

Poor Phyllis/ me when I'm tired.

NETFLIX: Are you still watching? ME: No NETFLIX: Do you want it on in the background anyway to fill the deafening silence of your loneliness? - chelsealikethehotel

Sometimes, you just get duped.

David Wallace eventually watching the documentary on PBS and realizing the Michael Scott Paper Company was broke when he bought them out and that Jim knew the entire time. - triforce4ever

They know we do this?! Am I in trouble?!

An actual tweet from Netflix Canada: Me attempting to use several of my friends' logins - TriggrTorn

Much saucier than I would've guessed.

An actual tweet from Phyllis Smith: Steal my look again, I dare you - wilymon

I like the one where Jim looks into the camera.

Say what you will about fans of The Office, because they're too bust watching it for the 350th time to hear what you're saying. - rutu1012

One of Michael's biggest blunders.

When you put five golden tickets in separate boxes but somehow they all ended up at Blue Cross. - UnluckyPersona

I hope Idris is in the eventual reboot.

When you hold the door open for a girl and she smiles at you for 0.069420 milliseconds. - Sachrine

Just go along with it, kid.

I swear Robert is some crime lord using a paper company as a coverup. Holy sh*t I started writing this as a joke but now I actually believe it. - MisterSheeple

Me every time I'm out in public. - MeatQuaad

A heartbreaker, every time.

When the girl you like calls you "buddy." - hkallay

It's all lead to this.

Just realized John Krasinski made his career essentially playing a character that specialized in non-verbal cues, and now he’s directing and starring in a movie where if you make noise you could be killed. This is what he’s been training for. - BigTuna185

Finally, for all you Redditors...