The One Rule Everyone Breaks | 22 Words 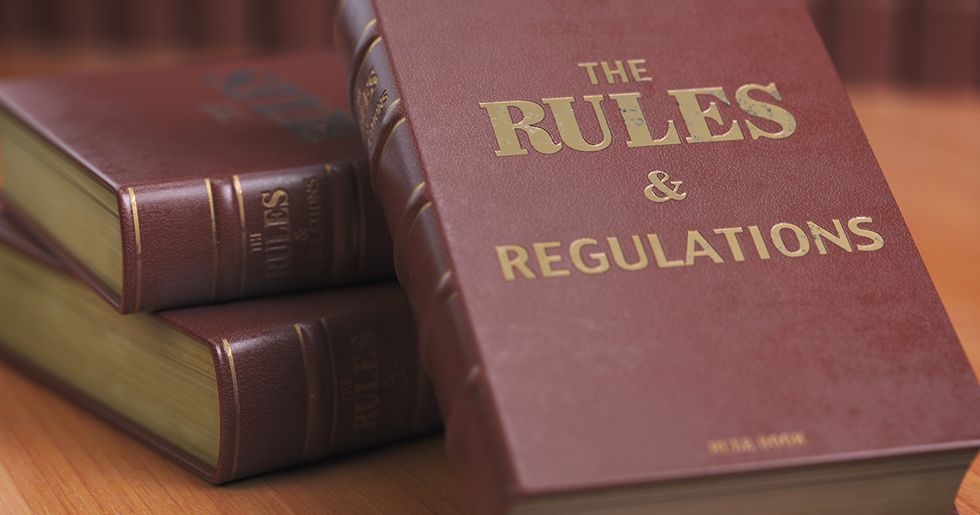 The One Rule Everyone Breaks

While at times Reddit can be a scarily sarcastic and terrifying place, most of the time the threads created there can make for the perfect blend of truth and sass to tickle anyone's fancy. Redditor, awkwardrook managed to create one of those perfect Reddit storms by asking a simple question: "what's one rule everyone breaks?"

I'll give you a minute because I'm sure you've got an answer of your own– but I will say that the rest of the Internet went buck-wild on this question. They came up with some brilliant answers. Do you break any of these rules?

Everyone breaks their New Year Resolutions.

The suggestions started off innocently enough, like how Redditor osktox who reminded us that sometimes the rules we break most often are the ones we impose on ourselves.

Did you remember to brush and floss?

In a similar vein, we all know that we don't brush or floss our teeth the right amount, and just like our New Year's Resolutions, the only person we're hurting is us. I'm so sorry, sweet teeth.

Speaking of things that only hurt ourselves, I know that none of you reading this follow the rule of getting eight hours of sleep each night. Honestly, I'm probably going to go home and cry about it for eight hours while watching trashy Youtube videos because you KNOW I'm not about to use that time for sleeping.

Never put off until tomorrow.

Oh look, another rule we all break and then regret later! Is this the wrong time to admit that I was the geek in school who always had papers done a week in advance?

Those don't go in there.

We would all be safer if we followed this rule. It does seem a little ridiculous that you're not supposed to stick Qtips in your ears. That is literally the only purpose that I was ever taught for a Qtip.

What else do you use them for?

Thankfully someone jumped in to explain to us what you ARE supposed to use Qtips for. But let's be honest, no one has ever bought those sweet cotton babies to clean off a keyboard, because none of us have ever cared enough to clean our keyboards in that level of detail.

Be polite at the gym!

Other users were quick to jump on those that don't follow basic rules of politeness– like JackandCoke14, who was incredibly irritated that the people at his gym don't clean up after themselves. I mean fair, I don't want to sit on your butt sweat after you leave the weight machines, but also my little legs are tired when I'm done.

We all pick our noses, so let's be honest about it. As someone who had their nose pierced within the last three days it has become INCREDIBLY OBVIOUS to me how often I stick my fingers up there without noticing. Be polite. Don't do it.

Speaking of hygiene, did you know you were supposed to shower BEFORE you enter the pool?

I guess I've been contributing to the nasty germ bath that we create each summer, and I didn't even know it.

This one should be obvious though.

On the other hand, the "don't pee in the pool" side of pool etiquette should be obvious. No amount of chemicals will change the fact that it is URINE.

While it's not as disgusting as a pool full of chlorine, raw cookie dough may be more dangerous, since you could contract salmonella. That definitely has not stopped me from eating a full batch's worth of dough before. Delicious, delicious food poisoning.

One dip per chip!

Speaking of food hygiene, we all know the rules about communal dips– no double dipping! Why is it that no one listens then?

You knew it was coming.

Of course, the moment you heard rules that everyone breaks, I know you thought of drugs. Our sweet friend Mary J. made quite a few appearances in this thread under a wide variety of names.

These people are truly creative.

Other highlights of the marijuana section of the thread included jazz kale, Alastor's allspice, Satan's sassafras, and Beelzebub's broccolini.

Lies we all know are lies.

You know those signs, the ones around all the bongs that say obvious lies like "Pipes for tobacco use only." They can't tell me what to do.

Look underage drinking is a serious problem and we should face it head on by recognizing that everyone does it.

It might scare you to read this thread because the VAST majority of answers had to do with road rules, including this concerning comment that implies that writer has no idea what they're supposed to do at a four-way stop.

Does no one stop at these things? I think it might be time for me to stop trusting other drivers.

Remember way back in driver's ed when they explained how much space you're supposed to leave behind the car in front of you? Yeah, if you follow those rules you're going to have people cutting you off left and right.

God, just @ me next time

There's no law that says I'm not allowed to spend 15 miles in the left lane, cruising 20 miles over the speed limit is there? Oh, wait.

About that speed limit.

If you say you've never driven over the speed limit I think we all know you're lying, since the actual speed limit is 5-10 miles over what's posted. At least that's what I tell myself.

It's not just cars either.

Turns out pedestrians break rules too! Even if we don't cross in crosswalks, at least we can all agree that there are right and wrong ways of jaywalking, right?

No more cars for a while please.

Ok, now that I've reminded myself why driving is a death trap let's talk about the more benign side of rule-breaking– doing it just because the rule is there. If there's a sign that tells me what to do you better believe I will not be listening.

Why would I pay for Netflix when my cousin's husband's brother's friend has an account that I can use?

Speaking of rules that are made to be broken, I'm sure as heck not paying $10 for a bag of popcorn the size of my fist. That's what purses are for!

I'm sorry I don't have 10 hours every time I install a program or an update to peruse the friendly legalese contained in their terms and conditions, but so far it hasn't come back to haunt me.

This is where it gets weird.

Ok, so up until this point, everything's been pretty straightforward. You know Reddit can't let that stand, which is why they've brought forward a few rules for consideration that break the mold. If you've ever talked about Fight Club, you're in violation of this one.

If you thought that a made-up rule from a movie was the weirdest one that everyone breaks you'd be wrong. That title goes to this submission, which calls out the fact that it's impossible to break Rule 34. No, I will not reveal what it is, please consult Google.

Is this even a rule?

Ok, so the sign that says to push rather than pull a door isn't really a rule, but it's probably the most embarrassing thing on this list so I had to include it.

The clear winner is...

There's only one right answer to this question and we all know what it is– pirating music. Everyone's done it. No one feels bad. What a bummer.