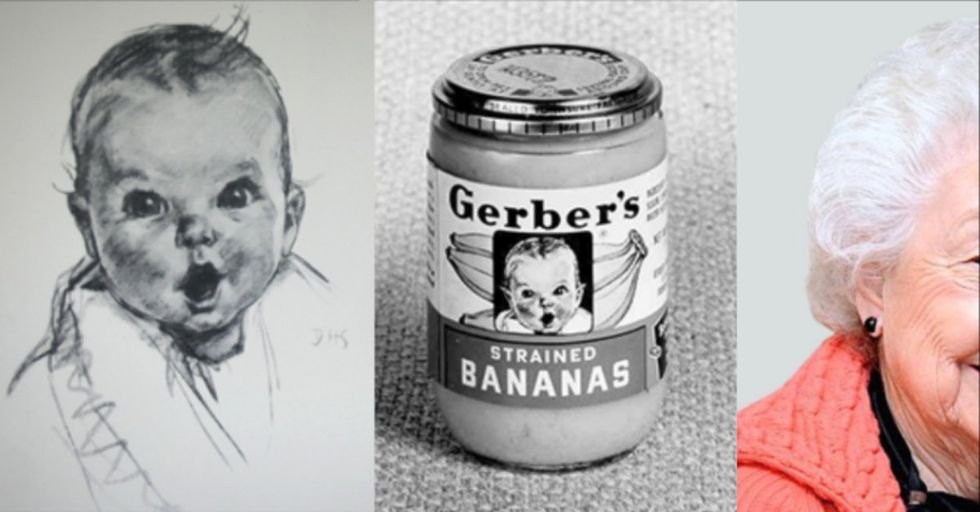 There are some faces you'd just recognize anywhere. One of those is the Gerber Baby. She's been on every jar of Gerber baby food for more than 90 years — even your grandparents would recognize that baby's face!

But even though the Gerber Baby's face is super recognizable, most people don't really know anything about her. Did you know, for instance, that the sketch was modeled after a real baby back in the '20s? It's true!

If you've ever had a baby (or ever were a baby), you're probably familiar with the company called Gerber.

They're one of the top producers of baby food in the world. They've got everything from mashed bananas to mashed peas. Basically, if you can mash it and feed it to a baby, Gerber has done it. (In fact, they even made food for adults for a brief period! It did not go over well.)

This little cutie has adorned jars of Gerber baby food since 1928 when an artist named Dorothy Hope Smith entered the sketch into a contest held by the company to find a face for an advertising campaign. Smith said that she'd complete the sketch if her entry won, but Gerber fell so in love with the sketch that they kept it just the way it was.

Although the Gerber Baby was only meant to be used for one advertising campaign, the face quickly became a trademark for the entire company.

For years, the identity of the Gerber Baby remained a mystery, although people had their guesses. Some speculated that it was Elizabeth Taylor, while others felt sure it was Jane Seymour.

The Gerber Baby's face is still used on the company's packaging today.

Talk about consistent branding! But even though the baby on the package has remained almost exactly the same throughout the years, the woman who posed for the original sketch has grown up.

In fact, this past week she celebrated her 91st birthday!

Her name is Ann Turner Cook, and you've got to see what she looks like now...

Here she is! The Gerber Baby, all grown up!

Ann Turner Cook is a mystery novelist and retired English teacher. When she was five months old, her neighbor Dorothy sketched her for the Gerber competition. And the rest is history!

The Gerber Baby's true identity wasn't revealed to the public until the year 1978.

Ann was 52 years old when it was announced that she had been the model for Gerber. Isn't it kind of nice to know that the Gerber Baby isn't some bigshot celebrity, and is instead just a regular, adorable person?

Her father was also pretty famous.

People are completely tickled to see what the Gerber Baby looks like now that she's not a baby anymore.

You can still definitely see the resemblance between her baby portrait and current visage. Especially in the eyes and eyebrows. She's just as adorable at 91 as she was at 5 months!

We can't say for sure whether Ann Turner Cook (or the woman who drew her) has been collecting royalty checks this whole time, but we do know that she's solidified her place in history. That's a pretty great prize, if you ask us.