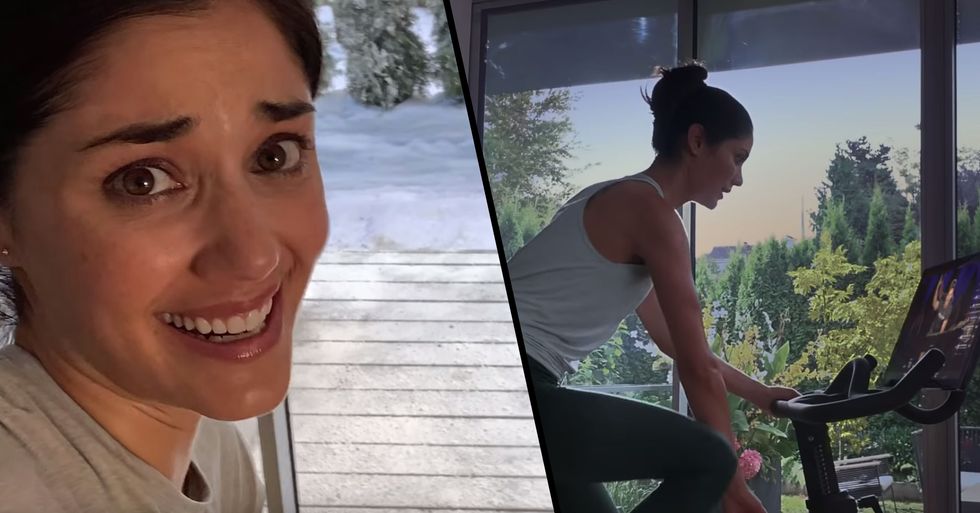 The 'Peloton Wife' Is Blaming Herself for Backlash Against 'Sexist' Ad

This Christmas has so far been dominated with rather tasteless ads, and the Peloton exercise bike company is well and truly up there as one of the worst.

The internet was furious after watching the sexist and disturbing Christmas commercial, and Peloton has lost a lot because of it.

But finally, the actress who is in the middle of all of the controversy has spoken out.

"The gift that gives back."

Peloton decided that an overly expensive exercise bike is the perfect gift for all of us this Christmas.

I say all of us, but what I really mean, is for women, wives, and moms. Well, that's according to the commercial they released recently.

Rather than a heartwarming story about love, hope, and forgiveness, we have 6 AM workouts.

I don't know about you, but if someone got me a 2 thousand dollar exercise bike, I would hope that they kept the receipt. Imagine what you could do with 2 grand!

They seem to think we're ready to splash out $2,245 on a bike that can't even take us anywhere and a further thirty-nine dollars to have video-lessons on how to use it! Let me know how us normal folk can afford to maintain a bike that that?

Imagine suggesting this idea at a board meeting...

The storyline starts with a slim mom and a young daughter coming down the stairs of their home. So far, so cute. I like it, let's keep going...

They're greeted by her husband, who presents her with a Peloton bike as a gift...

Despite there being lots of other Christmas presents under the tree in their home, he decided this one would be the best please his wife.

Don't get me wrong, lots of people would love a Peloton exercise bike...

But this woman, who is already slim and looks very healthy doesn't need one. She even questions it in the video, surprised at the gift, saying: "A Peloton?"

Nonetheless, she starts the journey to "better herself."

Instead of spending time with her daughter, she decides she wants to start dedicating herself to exercising constantly and video-blogging it for her husband to watch.

While using the bike for the first time, she is taking a selfie video in which she claims she is "nervous but excited." Sorry, but about what??? Your husband watching you cycle with an expensive virtual trainer?

The next part shows her rushing back home so she can complete another workout for the fifth day in a row.

And of course, she is still blogging it for her husband's pleasure. She also asks him: "Are you surprised?" like he had insinuated she could never keep up with it. It's a bike for crying out loud!

The next day, she decides she's going to wake up at 6 AM for a quick workout before work.

Stop it now. She looks tired and fed-up, yet she wakes up and hops on the bike, videoing the entire process, yet again. At one point, the computer in the machine says her name and it seems to excite the woman as she exclaims: "Oh my god! She said my name!" Wow? You typed your name into the setting and she repeated it? Great.

But the most disturbing part, for me personally, is the last part.

The couple is sat on the sofa watching the workout videos as some sort of bonding activity, I'm guessing? I mean, if that's what they like to do for fun, then who am I to judge?

She seems nervous as she watches her husband, watch her.

She's playing with her fingers and raising her eyebrows in anticipation. In the video she's talking to him, saying: "I didn't know how much this would change me!" And the child is nowhere to be seen. I think she was only in there for heartwarming purposes but it didn't work anyway.

When the vlog ends with a sincere "thank you", she turns to her man who is grinning.

She stares up at him like he is the light of her life while he continues staring ahead at the television set. Wow, true love at its peak...

The internet has been left disgusted by the commercial, claiming it's "sexist" and "classist."

Someone, please explain to me how a slim and gorgeous woman needs to be working out to that extent on an exercise bike? And then tell me how one is supposed to afford to maintain that bike if you're not already wealthy. The message is both damaging and patronizing to young women.

It seems as if the internet also agrees.

The Peloton ad could've been a work of art if it ended with the woman's daughter, now grown up, watching her mother… https://t.co/ySYEhEWhRo
— Brooks Otterlake (@Brooks Otterlake)1575325916.0

People have been left outraged and disgusted by such an advertisement. I bet Peloton is regretting putting it out. Keep scrolling to see it.

A better idea would have been something along the lines of this...

That Peloton commercial would be better if at the end you found out she used it to train hard everyday so that the… https://t.co/oBqAo16q1z
— Matt Fernandez (@Matt Fernandez)1575320684.0

It should have focused on the daughter. Maybe she loves riding bikes and wants to be a cyclist so when she gets to her 18th birthday, the dad buys her a Peloton so she can start training and in the end, she becomes an award-winning cyclist. I should have sorted out this advert.

And I didn't want to have to double yikes during this story but it's coming... Double yikes!

It got so bad that the company dropped in value instantly.

The fact the husband gives his super hot wife an exercise bike for Christmas isn't even the most insensitive thing… https://t.co/edcyhDvRO9
— TickTockManitowoc (@TickTockManitowoc)1575409031.0

Peloton lost $942 million in a matter of days after the video went viral. However, despite the numbers, Peleton have claimed that they have received enough support and have decided to stand behind it. The last to leave the sinking ship? I commend it.

Peloton finally spoke out about the ad...

After the severe backlash, a spokesperson for the exercise bike company said to The Independent, “While we’re disappointed in how some have misinterpreted this commercial, we are encouraged by – and grateful for – the outpouring of support we’ve received from those who understand what we were trying to communicate."

They claim to be passing on a motivational message...

But it's safe to say that the majority of the world begs to differ.

But what about the actual face of the commercial?

This is Monica Ruiz - or more commonly known as the "Peloton wife."

Ruiz is a full-time actress...

And when she was cast for the Peloton Christmas commercial, she didn't at all expect for things to become this out of hand.

She appeared on the Today show last week...

Speaking to host Hoda Kotb, Ruiz said that she initially laughed when she first saw the completed ad. "It's crazy to see my face everywhere this much and see everyone talking about it."

She was actually surprised by the backlash...

She decided to wait for it to all blow over...

"So I thought maybe I should just wait for it to blow over...When it didn't blow over and people started answering for me...I was like okay. I'll just let everyone know I'm fine. I'm not in rehab for mental health anywhere" she added, explaining her reason for coming on the show.

Ruiz actually blames herself for the outrage...

"My eyebrows looked worried I guess. People were like, 'You look scared,' I'm telling you, it was my face, that was the problem, and it just exploded it from there. She looks worried," she explained.

Ruiz doesn't see what the huge deal is...

And at the end of the day, she was simply doing her job.

And if you're in the mood to see an actual heartwarming Christmas commercial, then keep scrolling to see our favorite extra-terrestrial reuniting with his bestie...